John Dean: The Difference Between Trump & Nixon is Trump Says Publicly What Nixon Said on Wiretap

We compare President Donald Trump’s attitude toward the media to that of President Richard Nixon with Nixon’s former counsel, John Dean. “The big difference is, Trump is doing this right out and challenging the First Amendment, one of our most important because it involves freedom of the press and freedom of speech,” Dean says. “Anything that he doesn’t like, any reporting, he calls being an enemy of the people … It’s just ludicrous. And it’s troublesome that he would try to sway the press by using the bully pulpit of his office to intimidate them.”

STEPHEN BANNON: Corporatist, globalist media that are adamantly opposed—adamantly opposed to a economic nationalist agenda like Donald Trump has. … Here’s the only—here’s why it’s going to get worse: because he’s going to continue to press his agenda. And as economic conditions get better, as more jobs get better, they’re going to continue to fight. If you think they’re going to give you your country back without a fight, you are sadly mistaken. Every day—every day, it is going to be a fight.

AMY GOODMAN: That is White House chief strategist Steve Bannon, the former head of Breitbart Media. We’re talking to John Dean, served as counsel to President Richard Nixon. Your thoughts on what he is saying, and President—President Trump himself saying that the media, the press, is the enemy of the American people?

JOHN DEAN: I find it very startling and very troubling. It is more Nixonian than Nixon. And I say that for this reason. Nixon made those kind of comments, that we only know about because he had his secret taping system running and seemed to forget it was on just constantly when he was in the office. It would automatically go on. And he’d make those kind of attacks against the media, calling the media the enemy, saying that he was going to wiretap them and surveil them to find out who was leaking. He would have his top hatchet man, Chuck Colson, call the heads of the networks and read them the Riot Act for their coverage. So he did these things behind closed doors.

The big difference is, Trump is doing this right out and challenging the First Amendment, that is one of our most important because it involves freedom of the press and freedom of speech. And he’s taking that on head on. Anything that he doesn’t like, any reporting, he calls being an enemy of the people by not giving something that’s laudatory to Trump and his administration. It’s just ludicrous, Amy. And it’s troublesome that he would try to sway the press by using the bully pulpit of his office to intimidate them. My hope is he does not. And I really don’t think, knowing the journalists I know, that he will. Nixon failed, and he had a deep reservoir of ill will to draw on when he got himself in real trouble. And I think Trump is creating the same problem for himself.

AMY GOODMAN: Many have compared Donald Trump’s speech at the Republican National Convention in July to the one given by Richard Nixon in 1968. This is a clip.

AMY GOODMAN: That was President Nixon in 1968. John Dean, your thoughts on these comparisons?

JOHN DEAN: Well, he was clearly—I wasn’t a part of his campaign. I didn’t join him until well into his first term. And he was playing scare tactics at that point, trying to make Americans vote for him as a strong man, very much like Donald Trump did in his Cleveland speech. It’s the same sort of tactic. They’re both authoritarian personalities, Amy. And this is a type of personality that tries to frighten people to take a strong man as their leader. And it works. No one knows for sure how many Americans are affected by this. The best guesstimates of social scientists are about 30 percent maybe. But it looks like Trump got more than that when he used these tactics. And it is not a healthy way to run a democracy by trying to frighten people into voting for you.

AMY GOODMAN: Let me turn to Donald Trump speaking in New York shortly before his inauguration, when he addressed questions about his business interests and asserted that, as president, he would be exempt from possible conflicts of interest.

PRESIDENT-ELECT DONALD TRUMP: I have a no conflict of interest provision as president. It was many, many years old. This is for presidents, because they don’t want presidents getting—I understand, they don’t want presidents getting tangled up in minutiae; they want a president to run the country. So I could actually run my business. I could actually run my business and run government at the same time. I don’t like the way that looks, but I would be able to do that, if I wanted to. I’d be the only one that would be able to do that. You can’t do that in any other capacity. But as a president, I could run the Trump Organization—great, great company—and I could run the company—the country. I’d do a very good job. But I don’t want to do that.

AMY GOODMAN: So, that’s Donald Trump. And, of course, President Nixon famously said, “If the president does it, it’s not illegal.”

JOHN DEAN: Well, Trump is wrong. What the law says is he can’t be criminally prosecuted. But a president can’t be criminally prosecuted for anything, any offense. A president could theoretically shoot somebody on Fifth Avenue, to use an analogy, and not be prosecuted for it. He could be impeached for it and then later prosecuted. But a sitting president, the best tradition and law we have, and lots of opinions that have come out of the Office of Legal Counsel at the Department of Justice, says he’s immune from prosecution. But that doesn’t mean he’s immune from the law. It was anticipated that, as the head of the executive branch, he would set the example for conflict of interest.

Nixon, the way he handled it, he sold all of his stock, bought real estate, that was very passive investment that he couldn’t affect. He did get criticized later for having the Secret Service make some improvements on the property for security reasons, that also were good for the value of his properties. But Trump has pushed this to a level that we’ve never seen, never had to cope with. And it’s very troublesome, because almost everything he does—and it’s clear he’s doing—that are helping his business. And I think at some point Americans are going to say, “Hey, this isn’t what we had in mind,” those who did vote for him. And those who didn’t vote for him are going to even be more offended. So, this is a bad play, and it’s going to come back and haunt him.

AMY GOODMAN: Very quickly, John Dean, in January, as you know, Trump famously fired the acting attorney general, Sally Yates, hours before—hours after she announced that the Justice Department would not defend Trump’s executive order banning temporarily all refugees from the seven countries, the famous Muslim ban. Senator Chuck Schumer referred to the firing as the “Monday Night Massacre,” which of course alludes to President Nixon and the Saturday Night Massacre. In these last seconds we have with you, talk about that and this comparison of—

JOHN DEAN: That, Amy, suggests to me how ignorant he is about the job he has. I don’t think he has even a good newspaper knowledge of the way the presidency works. I don’t think he’s ever read an autobiography or biography of any of his predecessors. And what he did is indeed an example of the way Nixon handled a special prosecutor who he didn’t want to pursue his own tapes at that point. So, this was just a ham-handed very early effort. They didn’t need to fire her. They had asked her to stay on as an acting attorney general. She was going to leave as soon as a permanent attorney general was confirmed. So, this, I think, is just more evidence of his ignorance.

AMY GOODMAN: Well, we have to leave it there, and I want to thank you very much for being with us. 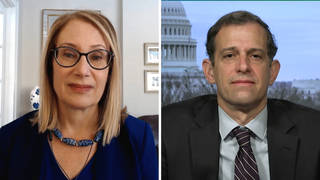