President Trump opened his speech to Congress by condemning the five nationwide waves of bomb threats targeting Jewish community centers, the desecration of hundreds of gravesites at two Jewish cemeteries and the murder of an Indian man in Kansas by a white man who reportedly yelled “Get out of my country!” before opening fire. But he made no mention of recent attacks targeting mosques. His speech came just hours after he suggested the anti-Semitic incidents may be false-flag attacks. We speak to Muslim American organizer Linda Sarsour, who has helped raise over $125,000 for vandalized Jewish cemeteries.

PRESIDENT DONALD TRUMP: Recent threats targeting Jewish community centers and vandalism of Jewish cemeteries, as well as last week’s shooting in Kansas City, remind us that while we may be a nation divided on policies, we are a country that stands united in condemning hate and evil in all of its very ugly forms.

AMY GOODMAN: So, that’s President Trump condemning the five nationwide waves of bomb threats targeting Jewish community centers, desecration of hundreds of gravesites at two Jewish cemeteries and the murder of an Indian man in Kansas by a white man who reportedly yelled “Get out of my country!” before opening fire. He apparently thought that the men were Iranian. Trump has been under enormous pressure to condemn the threats and attacks.

But just earlier in the day, President Trump reportedly made a strange comment about the anti-Semitic threats during a meeting with state attorneys general in which he appeared to question whether the Jewish community itself was behind the bomb threats. Pennsylvania Attorney General Josh Shapiro says Trump said of the threats, quote, “Sometimes it’s the reverse, to make people—or to make others—look bad,” unquote. Pennsylvania Attorney General Shapiro said Trump went on to use the word “reverse” two or three more times. In response, Steven Goldstein of the Anne Frank Center said, quote, “Mr. President, have you no decency? To cast doubt on the authenticity of anti-Semitic hate crimes in America constitutes anti-Semitism in itself, and that’s something none of us ever dreamed would disgrace our nation from the White House,” unquote.

Linda Sarsour, when the attack on the Missouri Jewish cemetery took place, the toppling of the scores of tombstones, you immediately went online to raise money for the cemetery. Can you tell us what you did?

LINDA SARSOUR: I was just horrified that people or someone can desecrate a cemetery where there have been people buried there since the 1800s. I mean, these are people trying to rest in peace, and their families live across the country. And as a Muslim, I was very moved. And I joined a colleague of mine in Philadelphia, Tarek El-Messidi, and we started a campaign. And we said we’re going to give, you know, a symbol just of solidarity, $20,000. And within three hours, we had already raised $20,000. We have raised over $125,000. And we are actually going to be sharing those resources with the Philadelphia cemetery, that Tarek actually just visited. So, I’m just—for me, it’s—the words of Donald Trump at his joint address was a little too late for me. There have been dozens of bomb threats across the country against Jewish centers, the two cemeteries, the Indian man. There have been four mosques that have been victims to arson just in the past six weeks. And he has said nothing, and waited to come to that address and ignored the Islamophobic attacks and arsons that have happened against the Muslim community and Muslim centers.

AMY GOODMAN: The center in Texas, the mosque that was burned to the ground, and the Jewish synagogue handing their keys to the Muslim worshipers to say, “Our house is your house,” we’ve seen this kind of just grassroots solidarity. You raised that amount of money without—though, obviously, Donald Trump is a notorious tweeter, he didn’t tweet on any of these attacks.

LINDA SARSOUR: It’s just—you know, somebody asked me, they said, you know, “How could Donald Trump—you know, what does he have to do, what actions does he take, to stand up against anti-Semitism and Islamophobia?” And I said he can start with removing the Islamaphobes and the anti-Semites in the White House. We have an administration that has the most notorious anti-Semites, the most notorious white supremacists and Islamaphobes, that is creating this environment. And I do put blame on this administration for the attacks and the rhetoric that is happening against our communities.

AMY GOODMAN: Bill Hartung, your thoughts on this? 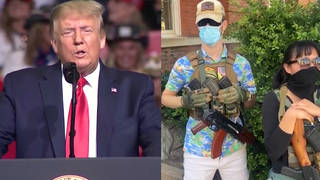