“A Woman’s Work Is Never Done”: Thousands of All Ages Rally in NYC on International Women’s Day

In New York, thousands of women marched from Washington Square Park past the site of the Triangle Shirtwaist Factory fire, the deadliest workplace accident in New York City’s history and a seminal moment for the American labor rights movement. They proceeded past the historic LGBTQ landmark, Stonewall Inn, in the West Village and then ended the march in Zuccotti Park, the site of the 2011 Occupy Wall Street uprising. Democracy Now!’s Deena Guzder and Charina Nadura spoke to some of the protesters in this extended report.

JESS LEHMANN: My name is Jess Lehmann. And we came out, actually, with my colleagues from our office. We collectively have had the opportunity to strike together. I think something that felt important to me was actually standing in solidarity with the women who do do work that means that the fabric of society stays together, and I think they mentioned it here before, but all the unpaid work that goes into contributing to wealth in this society and all societies across the world.

DEENA GUZDER: This International Women’s Day is the first one after Donald Trump’s inauguration. What are your thoughts about his presidency so far, as a woman?

JESS LEHMANN: I feel like my—like the first thought was of being terrified and angry—really angry—angry that women are still having to fight for fundamental rights to own their own body and that any one other person should claim that they have ownership over that, will have the right to determine what’s right or you, because we are self-actualized beings, right? We’re also humans. So we should have the chance to be treated as such. I think, then, it’s turned into a kind of desire to be active and to channel those feelings and thoughts into something that’s productive, and also to be very sensitive. You know, I know that I have certain privileges, and that’s not the same for everyone.

IMAN YAHIA: My name is Iman Yahia, and I am a pharmacy student from LIU, Long Island University, in Brooklyn. Well, obviously, I’m a woman. And particularly, I’m a Muslim woman. And I’m very proud of that. And I’m here to support all women. As a Muslim New Yorker and a soon-to-be working woman, I feel like we’re underprivileged in a lot of areas in society, and we’re not appreciated enough.

DEENA GUZDER: And we’re speaking just days after Donald Trump announced his second version of his travel ban, what many are calling a Muslim travel ban. Your response to this new travel ban?

MIRIAM BRODY: My name is Miriam Brody, and this is Isaac Kramnick. And we are here to support the various coalitions that come together to celebrate International Women’s Day in this manifestation of, we hope, our strength, going forward, to resist the movement afoot, alas, in the United States, which will affect us and the world. We are all aware of the great threats, on so many levels, to our freedoms, to the climate, to our healthcare. And we think it’s imperative to stand up and be counted. And it’s not a moment to sit back.

XIMENA MÁLAGA SABOGAL: My name is Ximena Málaga Sabogal. I’m from Peru. And my sign says ”Vivas Nos Queremos, Ni Una Menos.” This was the slogan of a big campaign that started last year in Latin America because of a ola—how do you say ola—because of a wave of femicides and crimes against women that were, sadly, pretty much availed by the states, that didn’t do anything to fight them. So it’s something that started in Peru, went through Argentina, Mexico and many other Latin American countries. And we also feel that, from here, women that are immigrants, that are living here in the States, sadly, we don’t feel that that situation changes at all. So, it’s just a wake-up call now. It’s ”Ni Una Menos” because we don’t want more victims of gender violence.

DEENA GUZDER: And can you describe for our radio audience what you’re doing here lying down in Washington Square Park?

XIMENA MÁLAGA SABOGAL: Yes, of course. This action is called La Alfombra Roja, which means “the red carpet.” And it actually started in Peru during the '90s, when we were protesting the forced sterilizations of indigenous women in Peru and that were carried out by former President Alberto Fujimori, who is now in jail. And the red carpet symbolizes how, actually, usually, to go to some sort of goals, the states—the state actually goes over women's bodies.

SHERRY GORELICK: My name is Sherry Gorelick. And my sign says “International Women’s Day, Palestinian and Israeli women say women break down the wall.” And that’s a theme that comes from Palestinian and Israeli women in Palestine. I’m Jewish, and it’s very important to me to say that what Israel does and claims to do in my name is not doing for me. The checkpoints that Israel imposes on Palestine particularly harm women. And we’ve known this for a while, because women trying to go to a hospital to give birth are stopped at the crosspoint. They die at the checkpoints, because they’re not allowed to go off to the hospital. I mean, it affects women in very particular ways. And women have mobilized and have been active against the Israeli occupation and against militarism for decades. Decades.

MARYAM DILAKIAN: My name is Maryam Dilakian And I’m here because I’m a teacher, and I’m a mom, and I’m an immigrant. I feel like that’s enough reasons to want to be out here fighting for everybody.

DEENA GUZDER: And you’re here with your daughter. And—

MARYAM DILAKIAN: I’m here with my daughter Imani, who likes to protest a lot.

DEENA GUZDER: Why did you, as a mother, decide to come out here today and with your daughter? What type of future do you want for her?

MARYAM DILAKIAN: I think it’s really important that, you know, as a girl of color and as a daughter of immigrant parents, she knows that it’s important to fight for our rights as early as possible. And as a teacher, too, I feel like we owe our children civic education outside of the classroom.

DEENA GUZDER: What grade do you teach? And did many teachers walk out of school today?

MARYAM DILAKIAN: I teach high school. We, at our school, made a decision not to walk out, in service to our students. We did spend a lot of time talking about women and about human rights in our classrooms today across disciplines. But we decided to stay there for our kids, because a lot of them don’t have anywhere to go when there’s no school. So that was a decision we made as a staff.

DEENA GUZDER: This is the first International Women’s Day since Donald Trump took office. What are some of your thoughts about his presidency so far?

DEENA GUZDER: Can I ask you what your name is and how old you are?

IMANI DILAKIAN: I am five, and my name is Imani.

DEENA GUZDER: What do you think about Donald Trump?

MARYAM DILAKIAN: What do you think about girls and women? 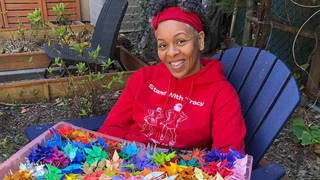