President Trump signed an executive order Tuesday to dismantle a slew of climate rules established by President Obama. If carried out, the executive order will virtually guarantee that the United States will fail to meet its 2015 Paris Agreement pledge to reduce emissions in order to curb the effects of climate change. The executive order marks the first step to undo Obama’s Clean Power Plan to limit emissions and replace coal-fired power plants with new solar and wind farms. For more, we speak with Jacqueline Patterson, director of the NAACP Environmental and Climate Justice Program.

AMY GOODMAN: This is Democracy Now!, democracynow.org, The War and Peace Report. I’m Amy Goodman. President Trump signed an executive order Tuesday to dismantle a slew of climate rules established by President Obama. If carried out, the executive order will virtually guarantee that the United States will fail to meet its 2015 Paris Agreement pledge to reduce emissions in order to curb the effects of climate change. The executive order marks the first step to undo Obama’s Clean Power Plan to limit emissions and replace coal-fired power plants with new solar and wind farms. Trump signed the executive order at a ceremony at the Environmental Protection Agency while being surrounded by a group of coal miners, as well as EPA head Scott Pruitt, who himself denies the human impact on climate change.

PRESIDENT DONALD TRUMP: Today I’m taking bold action to follow through on that promise. My administration is putting an end to the war on coal. Gonna have clean coal, really clean coal. With today’s executive action, I am taking historic steps to lift the restrictions on American energy, to reverse government intrusion and to cancel job-killing regulations.

AMY GOODMAN: The executive order also ends President Obama’s 2013 Climate Action Plan, which outlined the federal government’s approach to curbing climate change. Trump never mentioned climate change or global warming during his remarks, even though 2016 was the warmest year on record, breaking the record set in 2015. He also only mentioned the EPA’s mission to protect the environment once.

PRESIDENT DONALD TRUMP: We’re going to continue to expand energy production, and we will also create more jobs in infrastructure, trucking and manufacturing. This will allow the EPA to focus on its primary mission of protecting our air and protecting our water. Together, we are going to start a new energy revolution, one that celebrates American production on American soil.

AMY GOODMAN: For more, we’re joined by Jacqueline Patterson, director of the NAACP Environmental and Climate Justice Program, joining us from New Orleans.

Welcome to Democracy Now!, Jacqueline. Talk about the effect of this executive order, its significance.

JACQUELINE PATTERSON: Yes, it is so significant. Thanks for having me. So, there are so many far-reaching implications for this rule, if the actions go forward as presented. Certainly—certainly, fortunately, labor experts and market experts say that regardless of this rule, which seeks to release the restriction on leasing of federal lands for coal, they’re saying that it’s not necessarily going to bring back the coal industry. But if it did, the coal industry is so harmful not only to the communities that are host to coal-fired power plants, but also to the very workers whose jobs that President Trump purports to save, including the fact that 76,000 coal miners have died of black lung disease since 1968, while the industry has fought against the regulations to protect them from coal mine dust. So we have those implications. We have implications like the communities that are host to coal-fired power plants are choking down sulfur dioxide, nitrogen oxide, mercury, arsenic, lead, not to mention that coal is the number—coal-based energy production is the number one contributor to greenhouse—to carbon dioxide emissions, which is the number one greenhouse gas emission that drives climate change. So, those implications are significant.

AMY GOODMAN: And can you talk about how, in particular, it will affect communities of color?

When we put out our report, “Coal Blooded: Putting Profits Before People,” back in 2012, we went around, and we visited with communities that were host to coal-fired power plants. And we heard time and time again from folks who had—half the kids in their school were on inhalers. Half the people in their church were on respirators. I spoke to a fellow in Indiana whose wife had died of lung disease. They lived within seeing distance of a coal-fired power plant. She had never smoked a day in her life. I spoke to a woman whose father worked in a coal plant and who died of lung cancer, but had never smoked a day in his life. So we see these stories—we hear these stories, and we see the statistics. And the disproportionate exposure and the differential impact are clear.

AMY GOODMAN: I want to turn to Earthjustice Policy Vice President Martin Hayden, who questioned whether President Trump’s executive order will have a significant effect on the coal industry.

MARTIN HAYDEN: [We] are a net exporter of coal, by a long shot. So, producing more coal isn’t going to make us more energy independent. And the other piece of producing more coal—and you saw many of the coal company executives say this last night—that while it may raise coal production some, it’s not going to create many more jobs, because they are more automated today, that the—that the trend has been fewer and fewer jobs in the coal fields, irrespective of how much coal is mined, because they’re using more mechanized approaches and less people approaches.

AMY GOODMAN: So, that issue, Jacqueline Patterson, of what the president keeps pushing, the issue of coal jobs?

JACQUELINE PATTERSON: Yes, so—yes, so, as I was saying at the very beginning, both the labor industry and the market say that it’s not necessarily going to bring back coal. I was saying what the implications would be if it did, in any way, increase—increase coal production—coal-based energy production in the United States.

AMY GOODMAN: We’ve been talking about coal plants, but let’s talk about coal-fired plants. Jacqueline, talk by your own growing up in Chicago.

JACQUELINE PATTERSON: Yeah, so I grew up on the South Side of Chicago, where there were three coal-fired power plants within a 15-mile radius of where I lived, the Fisk and Crawford plants on the South Side of Chicago and the State Line plant on the northwest side of Indiana. So, unbeknownst to me, really, because, you know, these things are there, and you often just don’t know the impacts of these—of these facilities in your community, I was living in this toxic corridor.

And fast-forward to today, when I was doing the work on the “Coal Blooded” report, I visited with the Little Village Environmental Justice Organization, PERRO and others in Chicago who were doing work on the Fisk and Crawford plants. And they had done a partnership with the Harvard School of Public Health. And through the community-campus partnership, they found that 40 asthma deaths and a thousand hospitalizations were attributed to the Fisk and Crawford coal plants, which gave them what the—the fuel that they needed to be able to inform the community, which eventually resulted in the City Council passing an ordinance around clean air and Mayor Rahm Emanuel giving a ultimatum to either clean these coal plants up or shut them down, which eventually did happen.

And so, again, I was growing up in harm’s way. My father—my father passed away a few years ago of lung disease. And his doctor specifically cited that it was due to environmental exposures. And now I wonder what the cumulative impact might have been of living on the South Side of Chicago in that toxic corridor with those three coal plants and other toxins in the air.

AMY GOODMAN: Finally, Jacqueline Patterson, just the overall broader issue of cuts to the EPA and the whole direction the Trump administration is going? And, I mean, he signed this executive order at the Environmental Protection Agency, which he said he is going to slash by almost a third. This is with the acquiescence of the head of the EPA—right?—the former Oklahoma attorney general, Scott Pruitt, who sued the EPA 14 times before he’s now become its head.

JACQUELINE PATTERSON: Mm-hmm, yes. And unfortunately, not only—if it was just slashed off of the EPA budget in general, that would be bad enough. But the fact that it’s targeted slashing of environment justice programs, that are meant to protect communities like Mossville, Louisiana, which is in this petrochemical corridor, which is a cancer cluster, which has already these existing impacts for their community, communities like Uniontown, Alabama, which, again, has multiple assaults in terms of its environmental exposures, the communities across the nation that are, again, disproportionately communities of color, disproportionately indigenous communities and low-income communities, communities in Appalachia, who are suffering under the impacts of mountaintop removal and so forth and so on. And so, the Environmental Protection Agency, as we—as per its name, it is there to ensure that we have the monitoring and the enforcement of safeguards for our health and well-being. So I shudder to think what the impacts will be if that agency does not serve that function.

AMY GOODMAN: Jacqueline Patterson, I want to thank you for being with us, director of the NAACP Environmental and Climate Justice Program, speaking to us from New Orleans.

This is Democracy Now! When we come back, the House votes on internet privacy. Stay with us. 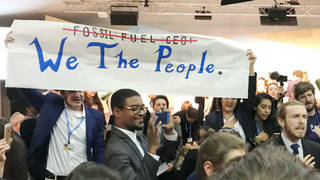