AMY GOODMAN: We go now to Washington state, where hundreds of undocumented immigrants are on hunger strike to protest the conditions and extremely low wages at the for-profit immigrant prison, the Northwest Detention Center in Tacoma. On Thursday morning, activists say women imprisoned within the prison joined the strike, which now includes more than 700 immigrants, or about half the population of the for-profit prison.

Hunger strikers are demanding better food, hygiene, medical care within the prison, which is owned by the major private prison corporation GEO Group. Organizers say prisoners have also launched work stoppages to protest the fact they’re paid only a dollar a day to cook, to clean, to do laundry necessary to keep the prison running. GEO Group is facing a class-action lawsuit arguing the company violates federal anti-slavery laws at its Aurora, Colorado, prison, where it also pays only a dollar a day. This is an audio recording of hunger striker Johnathan Rodriguez Guzman. Listen closely.

JOHNATHAN RODRIGUEZ GUZMAN: My name is Johnathan Rodriguez Guzman. And I’m just letting the people to know that I’m doing a hunger strike, just not for me, but for everybody out there and the future.

AMY GOODMAN: The strike began on Monday at noon with more than 100 prisoners refusing to eat lunch. Since then, activists have been supporting the hunger strikers with an ongoing 24-hour encampment outside the Tacoma jail.

The strikes come as Attorney General Jeff Sessions traveled to the U.S.-Mexico border in Nogales, Arizona, this week, where he met with U.S. Customs and Border Protection agents and vowed a major crackdown, calling immigration, quote, “an attack on our national security.” Immigration advocates say the Trump administration’s crackdown against immigration and immigrants living within the United States has led to more immigrants being imprisoned at jails, including at the Northwest Detention Center in Tacoma.

On Thursday, The New York Times reported, in its scramble to find new places to house immigrants arrested in ICE raids, the Trump administration is trying to curtail protections for immigrants being held in county jails, including doing away with a requirement that immigrants have access to translation services.

For more, we’re joined by two guests. Maru Mora Villalpando is an activist and undocumented immigrant with the group Northwest Detention Center Resistance and the group Mijente. And Alexis Erickson is the partner of hunger striker Cristian Lopez. Cristian was part of the hunger strike in the Northwest Detention Center in Tacoma, before he was transferred to a jail in New Mexico, where he’s continuing the strike. He’s facing deportation to Mexico.

We welcome you both to Democracy Now! Let us begin right now with Maru Mora Villalpando. Tell us exactly what you understand is happening in Tacoma.

MARU MORA VILLALPANDO: Well, we have now hundreds of people deciding to stop eating since Monday at noon. We had word from people in detention over the weekend that they were getting ready to do this hunger strike. We began with a few numbers. I mean, if you think about the maximum capacity there, 1,575, and we know that it’s over capacity, so when we heard that about a hundred people, and maybe more than that, were getting ready to strike, we were there, ensuring that we will support that.

And throughout the week, we saw numbers increasing and increasing, more and more people start joining. Yesterday morning, we heard from the women’s section saying that they were ready to also join the strike. And we heard from one of the areas that [inaudible] contact from the beginning, that they were being threatened with being transferred to a county jail in Oregon, and therefore they decided to stop. But other parts continue joining. And so, now we believe we have about 700 people, maybe more than that. It’s difficult sometimes to get communications from the inside. Even in one part, people decided to add a work stoppage, acknowledging that they are the backbone of the detention center. They also called for a boycott of the commissary and the telephones, as well.

AMY GOODMAN: Alexis Erickson, tell us about Cristian, Cristian Lopez, your partner, who is on hunger strike and has been transferred now from the GEO prison to New Mexico.

ALEXIS ERICKSON: Well, he was transferred about three days ago. On his way over there, he was treated wrong. He asked one guard, that was a ICE guard that was on the bus with him, if he speaks Spanish. They were just very rude to him, because he was asking for another guy that spoke Spanish only. When they got there, they said that they lost a lot of people’s property, which was not true. He ended up getting his property a couple of hours later, but he had to fight just to get his bags. They’ve just all been treated very wrong. And they said that there is a couple people where he is that are still doing the hunger strike.

ALEXIS ERICKSON: He was put in Oregon in February. He did his 20 days he had to do. He was still stuck for another month before he even got switched to Tacoma. When he got switched to Tacoma, he got off the bus the first time, and they put him right back on. He ended up going back to Oregon again, because they just said, “Your court date’s revoked.” So he had to come back again. He came back for his court date on April 6th. And he finally got deported two days ago. And he was treated really bad in the Tacoma facility.

AMY GOODMAN: You have how many children together? Are they American citizens?

AMY GOODMAN: How old are they?

AMY GOODMAN: Maru Mora Villalpando, can you talk about the fact that this is a for-profit prison and what difference you think this makes? They’re being sued under slavery—anti-slavery laws in Aurora, in a jail there. What about in Tacoma?

MARU MORA VILLALPANDO: Yeah, we know this is one of the largest detention centers in the West Coast and the nation. They make a lot of money out of encaging our families in there—$165, I believe, per day per person. And the jobs that people are getting paid to do inside for a dollar a day is not everything that they do inside. We have reports that people are asked to paint the walls or wash the floors in exchange for having a piece of chicken or a piece of candy, and sometimes not even that. They’re just promised that, and that doesn’t happen. We also have seen a lot of reports that the food is always bad, but sometimes it’s not only that, it’s the fact that the portions are getting smaller. And when people complain about that, GEO guards say, “Well, there’s just too many of you. What do you want us to do?”

AMY GOODMAN: We have to leave it there, but we’re going to continue the conversation after the show and post it at democracynow.org. We’re speaking with Maru Mora Villalpando with Northwest Detention Center Resistance and the group Mijente, and Alexis Erickson, whose partner is hunger striker Cristian Lopez. As a result, he was sent to a New Mexico jail from Tacoma.

Immigrants on Hunger Strike over Conditions as Trump Admin. Plans to Gut Protections for Detainees 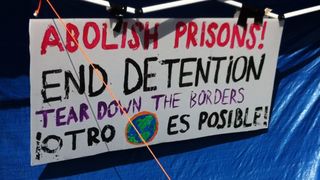 Immigrants on Hunger Strike over Conditions as Trump Admin. Plans to Gut Protections for Detainees