According to the group Airwars, at least 1,782 civilians were killed last month in coalition strikes. The civilian death toll could be as high as nearly 3,500. The battle for the Iraqi city of Mosul is now in its seventh month. The United Nations is warning the city is facing a humanitarian catastrophe, perhaps the worst in the entire conflict. More than 400,000 people are trapped in parts of the city still under control of the Islamic State. Meanwhile in Syria, Human Rights Watch has concluded the U.S. did in fact bomb a mosque last month, killing at least 38 people. The Pentagon claimed the drone strike on March 16 targeted a meeting of al-Qaeda members, but Human Rights Watch has concluded the victims were civilians who had gathered to pray. Human Rights Watch said it found no evidence that al-Qaeda or any other armed group was meeting in the mosque. For more, we speak with Anand Gopal, a journalist and a fellow at The Nation Institute. He recently returned from the Middle East and has reported extensively from the region.

AMY GOODMAN: “Confusion” by the Iraqi violinist Ameen Mokdad, who held a small concert in Mosul on Wednesday, in defiance of the Islamic State, marking his first return to Mosul after he was forced to flee in 2014 as Iraq’s second largest metropolis fell to ISIS. This is Democracy Now!, democracynow.org, The War and Peace Report. I’m Amy Goodman, with Nermeen Shaikh.

NERMEEN SHAIKH: We turn now to President Trump’s escalation of U.S. airstrikes in Iraq and Syria. According to the group Airwars, at least 1,782 civilians were killed last month in coalition airstrikes. The civilian death toll could be as high as nearly 3,500. This comes as the battle for the Iraqi city of Mosul enters its seventh month. The United Nations is warning the city is facing a humanitarian catastrophe, perhaps the worst in the entire conflict. More than 400,000 people are trapped in parts of the city still under control of the Islamic State.

We’re joined now by Anand Gopal, a journalist and fellow at The Nation Institute, recently returned from the Middle East, has reported extensively from the region.

Let’s start with Mosul and Iraq. You just recently returned from Iraq, Anand. Talk about what people in Mosul are saying. What is happening there?

ANAND GOPAL: Well, people in Mosul find themselves caught between airstrikes and terror from ISIS. I’ve been in touch with families every day who are describing just unbelievable scenes of carnage. One family that I spoke to, they were cowering in their basement, the whole family of six people, for hours. And fighting was nearby. An ISIS sniper climbed onto the roof and took shots at the Iraqi forces, and the Iraqi forces called in an American airstrike, which flattened the entire house, killing the entire family. I’m in touch with another family, which—there’s three separate houses that are joined together. And there was fighting in the next neighborhood. And somebody called in an airstrike, and it destroyed all three houses, pretty much wiping out 17 members of an extended family.

AMY GOODMAN: How is the U.S. involved with this?

ANAND GOPAL: These are all American airstrikes. There are some Iraqi airstrikes, as well, but, for the most part, these are American or other coalition member airstrikes. These are being called in either by special forces on the ground or by Iraqi forces.

NERMEEN SHAIKH: But some people suggest that it’s only because of coalition airstrikes that so much of Mosul has been reclaimed from ISIS control.

ANAND GOPAL: Well, this is true. Without the coalition airstrikes, the city would still be under ISIS. But there’s a question of the way in which the airstrikes are being conducted. And really, what we’re looking at right now is probably the biggest humanitarian catastrophe since the 2003 invasion. And this is coming not just from the airstrikes, but the way in which ISIS is essentially holding a large percentage of the population hostage. There’s now about 400,000 people in western Mosul who are not allowed to leave. I spoke to relatives of one family, a husband and a wife, who paid smugglers to try to leave west Mosul. They were caught by ISIS, and they were both beheaded. And this is happening on a daily basis. At the same time, people are running out of food. There’s now cases of malnutrition among toddlers and children.

AMY GOODMAN: Has there been a change on the ground since Trump took office?

ANAND GOPAL: Not really. What Trump has been doing in Iraq is, essentially, carrying out Obama’s policy. It seems from here like it’s an escalation, but it’s actually not an escalation. What’s happened is that the face of the battle has changed. East Mosul, the houses are kind of spread out, and they’re larger, so you don’t see as many casualties. West Mosul is a really densely packed area. You bomb one house, you’re going to hit three or four houses. And that’s been the main change. Obama actually relaxed the rules of engagement a number of times, including most recently in late December, where he made it easier for forces on the ground to call in airstrikes. And I think this is actually the biggest cause for the spike in civilian casualties, nothing that Trump has done.

NERMEEN SHAIKH: Well, the U.S. itself has admitted how difficult it’s been to get into Mosul and to take over, and that despite the fact that it’s been going on, the attempt to reclaim the city, for six months, that Iraqi forces have managed only now, or very recently, to get into the city and start fighting militants. Do you have any idea, from your time there and speaking to people, why it’s been so difficult?

ANAND GOPAL: Well, particularly now in west Mosul, you’re talking about very narrow streets, alleyways, covered markets. And it’s really something that has to go block by block. And it’s not a bad thing that it’s taking a long time, because the longer it takes, that means that the more careful that the forces are being with civilian casualties. The concern is if they really go quickly. That’s when you see a lot of civilians being killed.

AMY GOODMAN: And then you have this report in Syria, the Human Rights Watch report. We had already reported on the bombing of the mosque. It was just the Pentagon who was saying that they had bombed a militant group. Talk about what you understand is happening here. I mean, there was enormous attention paid to Syria last week. Because President Trump saw pictures of children dying of being gassed, the U.S. bombs this airfield. The way the media made it sound is that was the only time the U.S. was doing any bombing in Syria.

ANAND GOPAL: Right. What a lot of people don’t realize is that was actually probably like the 8,000th airstrike that the U.S. has carried out over the last three years. It’s only the first time they’ve ever targeted the regime. In fact, they’ve pretty much assiduously avoided targeting the regime for the last three or four years. They’ve targeted ISIS. They’ve targeted al-Qaeda. They’ve targeted members of the legitimate opposition. And they’ve killed many civilians. For example, last June or last July, under Obama, there was a bombing that killed over 200 civilians. And it didn’t really get much attention here, but this has been going on for a number of years.

AMY GOODMAN: And the mosque?

ANAND GOPAL: Yeah, and it’s clear that the U.S. has hit this mosque. And a number of investigations have shown that these were civilians, that there was—if there were high-ranking members of al-Qaeda as the U.S. claims, there were also dozens and dozens of civilians there.

AMY GOODMAN: Anand, we clearly have so much more to talk about, and we will, right after this broadcast ends, and we’re going to post it online at democracynow.org. Anand Gopal is a journalist and fellow at The Nation Institute, recently returned from the Middle East, has extensively reported from the region, author of No Good Men Among the Living: America, the Taliban, and the War Through Afghan Eyes.

And the Democracy Now! speaking tour is starting this weekend. We’ll be at Wesleyan University. We’ll be in Cambridge, Massachusetts. We’ll be throughout Vermont, and we’re going across the country from there. Check our website. 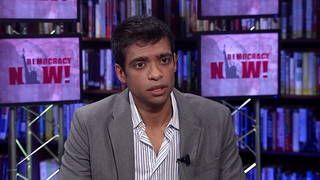