Over the last month, the Trump administration has escalated tensions between both North Korea and Iran. Vice President Mike Pence has warned North Korea, saying all options are on the table—including preemptive military strikes. Will either of these conflicts escalate to outright war? For more, Democracy Now!’s Amy Goodman asked world-renowned linguist, professor and political dissident Noam Chomsky, during a wide-ranging interview Monday night at the First Parish Church in Cambridge, Massachusetts.

AMY GOODMAN: At this point, as President Trump nears his 100th day, North Korea and Iran have been a major focus. Are you concerned that with the president at the lowest popularity rating, I think, in any president’s history at this point, that he will focus abroad, as he has in the last few weeks, dropping the MOAB, the “Mother of All Bombs,” in Afghanistan, bombing the Syrian government, and yet focusing specifically on North Korea and Iran—in North Korea, McMaster, General McMaster, the national security adviser, saying tensions with North Korea are coming to a head. Do you think there is a possibility that the U.S. would attack North Korea?

NOAM CHOMSKY: I mean, this administration is extremely unpredictable. Trump probably has no idea what he’s going to do five minutes from now, so you can’t—literally—so you can’t really make predictions with much confidence. But I doubt it very much. The reason is very simple: An attack on North Korea would unleash—no matter what attack it is, even a nuclear attack, would unleash massive artillery bombardment of Seoul, which is the biggest city in South Korea, right near the border, which would wipe it out, including plenty of American troops. That doesn’t—I mean, I’m no technical expert, but as far as I can—as I read and can see, there’s no defense against that. Furthermore, North Korea could retaliate against American bases in the region, where there’s plenty of American soldiers and so on, also in Japan. They’d be devastated. North Korea would be finished. You know, so would much of the region. But if attacked, presumably, they would respond, very likely. In fact, the responses might be automatic. McMaster, at least, and Mattis understand this. How much influence they have, we don’t know. So I think an attack is unlikely.

But the real question is: Is there a way of dealing with the problem? There are a lot of proposals: sanctions; a big new missile defense system, which is a major threat to China, it’ll increase tensions there; military threats of various kinds; sending an aircraft carrier, the Vinson, to North Korea, except by accident—it happened to be going in the opposite direction, but we’ll forget that. But these are—those are the proposals, that kind of proposals, as to how to solve.

Actually, there’s one proposal that’s ignored. I mean, you see a mention of it now and then. It’s a pretty simple proposal. Remember, the goal is to get North Korea to freeze its weapons systems, weapons and missile systems. So one proposal is to accept their offer to do that. Sounds simple. They’ve made a proposal. China and North Korea proposed to freeze the North Korean missile and nuclear weapons systems. And the U.S. instantly rejected it. And you can’t blame that on Trump. Obama did the same thing a couple of years ago. Same offer was presented. I think it was 2015. The Obama administration instantly rejected it.

And the reason is that it calls for a quid pro quo. It says, in return, the United States should put an end to threatening military maneuvers on North Korea’s borders, which happen to include, under Trump, sending of nuclear-capable B-52s flying right near the border. Now, maybe Americans don’t remember very well, but North Koreans have a memory of not too long ago, when North Korea was absolutely flattened, literally, by American bombing. There was—there was literally no targets left. And I really urge people who haven’t done it to read the official American military histories, the Air Quarterly Review, the military histories describing this. They describe it very vividly and accurately. They say, “There just weren’t any targets left. So what could we do?” Well, we decided to attack the dams, the huge dams. That’s a major war crime. People were hanged for it at Nuremberg. But put that aside. And then comes an ecstatic, gleeful description of the bombing of the dams and the huge flow of water, which was wiping out valleys and destroying the rice crop, on which Asians depend for survival—lots of racist comment, but all with exaltation and glee. You really have to read it to appreciate it. The North Koreans don’t have to bother reading it. They lived it. So when nuclear-capable B-52s are flying on their border, along with other threatening military maneuvers, they’re kind of upset about it. Strange people. And they continue to develop what they see as a potential deterrent that might protect the regime from—and the country, in fact—from destruction. This has nothing at all to do with what you think about the government. So maybe it’s the worst government in human history. OK. But these are still the facts that exist.

So, why is the United States unwilling to accept an agreement which would end the immediate threats of destruction against North Korea and, in return, freeze the weapons and missile systems? Well, I leave that to you. And remember, that’s bipartisan in this case. Could negotiations go—the usual argument is “Well, you can’t trust them,” and so on and so forth. But there is a history. And I—there’s no time to run through the history. It’s quite interesting. Begins in 1993, when Clinton—under Clinton, the North Koreans made a deal with Israel to terminate North Korean missile shipments to the Middle East, which is a great, serious threat to Israel and the world, and, in return, Israel would recognize North Korea. Now, the Clinton administration wouldn’t accept that. They pressured Israel, which has to do what they’re told, to withdraw from it. And North Korea responded by sending—by firing their first intermediate-range missiles. I won’t go on with the rest. It’s a very interesting story.

There was actually an agreement in 2005 that North Korea would completely dismantle its nuclear weapons and missile systems, end them, finish, dismantle them, in return for a nonaggression pact from the United States, an end to threats, provision by the West—that means by the United States—of a light-water reactor, which can’t produce nuclear weapons but could produce—be used for peaceful purposes, research, medical, other purposes. That was basically the agreement, 2005. Didn’t last very long. The Bush administration instantly undermined it. It dismantled the consortium that was supposed to provide the reactor. And it immediately imposed—pressured—and when the U.S. pressures, it means it happens—banks to block North Korean financial transactions, including perfectly legitimate trade. So the crazy North Koreans started producing missiles and nuclear weapons again. And that’s been the kind of record all the way through.

So, yeah, maybe the most horrible regime in human history, but the fact of the matter is the regime does want to survive, and it even wants to carry out economic development—there’s pretty general agreement about this—which it cannot do in any significant way when it’s pouring resources, very scarce resources, into weapons and missile production. So they have considerable incentive, including survival, to perhaps continue this process of reacting in a kind of tit-for-tat fashion to U.S. actions. When the U.S. lowers tensions, they do. When we raise tensions, they go on with these plans. How about that as a possibility? I mean, it is—if you look at the press, it’s occasionally mentioned. In fact, there was not a bad article in The Washington Post about it recently by a U.S. professor who teaches in South Korea. So, occasionally, it’s this strange possibility of letting the North Koreans do exactly what we want them to do. Sometimes this is mentioned, but it’s pretty much dismissed. We can’t do that sort of thing.

There are similar questions to raise about Iran. So, Iran is, you know, the—again, the adults in the room, like Mattis and so on, say it’s the greatest threat to peace, you know, the greatest sponsor of terrorism, on and on. How is it a sponsor of terrorism? Well, could go through that. So, for example, in Yemen, it’s claimed that they are providing some aid to rebel tribesmen, Houthi tribesmen, in Yemen. OK, maybe they are. What is the United States doing in Yemen? It’s providing a huge flood of arms to its Saudi Arabian ally, who are destroying the country, who have created a huge humanitarian crisis, huge numbers of people killed, massive starvation. They’re threatening now to bomb a port, which is the only source of aid for surviving people. But Iran is the major source of terrorism.

And if you look around the world, there’s many questions like this. I don’t want to go on too long. But, very strikingly—and this—there’s one lesson that you discover when you carefully look at the historical record. What I just described about North Korea is pretty typical. Over and over again, there are possibilities of diplomacy and negotiation, which might not succeed—you can’t be sure if you don’t try them—but which look pretty promising, which are abandoned, dismissed, literally without comment, in favor of increased force and violence. In fact, that’s also the background for the 1953 moment, when the clock moved to two minutes to midnight and the U.S. faced the first serious threat to its security, that, in fact—you know, since probably the War of 1812—could have been avoided. There’s pretty good evidence that it could have been avoided. But it was—the possibility was literally not even considered. And case after case is like this. It’s worth looking at the historical record from that perspective, to ask whether that general comment has some validity. I think, if you do, you’ll find that it has considerable merit.

AMY GOODMAN: We’ll be back with Professor Noam Chomsky in a minute to talk about the war in Syria and the Trump administration’s threats to prosecute WikiLeaks founder Julian Assange. Stay with us.

AMY GOODMAN: “If I Was President” by Las Cafeteras. Visit democracynow.org, where we’re premiering the whole music video. 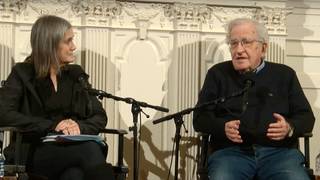