“A Land Grab by the Ruling Elites”: Trump’s Tax Plan Derided for Benefiting the Rich

The White House has outlined a plan to give the nation’s millionaires and billionaires a massive tax break while adding trillions of dollars to the U.S. deficit. The plan would lower the corporate tax rate to 15 percent, end the estate tax and end the alternative minimum tax—a move that would solely benefit the richest Americans, including President Trump. A leaked 2005 tax return shows Trump paid out $36.6 million in federal income taxes that year—most of it due to the alternative minimum tax. Former Labor Secretary Robert Reich described Trump’s tax plan as a form of class warfare. The tax plan was unveiled on Wednesday by two former executives at Goldman Sachs—Trump’s chief economic adviser Gary Cohn and Treasury Secretary Steven Mnuchin—who hailed the tax cuts. We speak to economist James Henry of the Tax Justice Network.

AMY GOODMAN: We’re broadcasting from Vermont PBS. The White House has outlined a plan to give the nation’s millionaires and billionaires a massive tax break while adding trillions of dollars to the U.S. deficit. The plan would lower the corporate tax rate to 15 percent, end the estate tax and end the alternative minimum tax—a move that would solely benefit the richest Americans, including President Trump. A leaked 2005 tax return shows Trump paid out $36.6 million in federal income taxes that year—most of it due to the alternative minimum tax. Former Labor Secretary Robert Reich described Trump’s tax plan as a form of class warfare. The tax plan was unveiled Wednesday by two former executives at Goldman Sachs—Trump’s chief economic adviser Gary Cohn and Treasury Secretary Steven Mnuchin—who hailed the tax cuts.

TREASURY SECRETARY STEVEN MNUCHIN: Under the Trump plan, we will have a massive tax cut for businesses and massive tax reform and simplification. As the president said during the campaign, we will lower the business rate to 15 percent. We will make it a territorial system. We will have a one-time tax on overseas profits, which will bring back trillions of dollars that are offshore to be invested here in the United States to purchase capital and to create jobs. The president is determined to unleash economic growth for businesses. This is not just about large corporations. Small and medium-size businesses will be eligible for the business rate, as well.

Well, let’s start off, James, if you could just lay out your reaction to the tax plan as it’s been unveiled.

JAMES HENRY: Well, this is nothing less than the largest wealth transfer that has ever occurred, if it were passed. I doubt that it will pass. But it amounts to a tax heist by the ruling class, by Trump and the richest administration we have ever had. It would not only effectively gut the progressive corporate income tax and initiate a race to the bottom among all countries that have corporate taxation around the world, because they would be competing with each other, it would also effectively gut the estate tax, eliminate that, so we’re basically heading toward a kind of oligarchy. And it would reduce the top rate for personal income tax to—from 39.6 percent to 35, so it’s an immediate paycheck.

This is also going to blow up the federal deficit by an estimated $3 [trillion] to $7 trillion over the next 10 years, so that’s going to not make deficit hawks happy. And I know—you know, the Republicans have time and again insisted on budget balances in this—under the Obama administration. The Congress was deadlocked many times. Well, this just throws that completely out the window.

It’s, I think, especially interesting to see what’s going on with the corporate income tax, because, basically, most of the benefits of this tax plan will actually go to the Googles and Microsofts and Apples of the world, which have—now are going to get an enormous tax rate on the $2 trillion of offshore assets that they have accumulated, many times using bogus schemes like transferring intellectual property to places like Ireland. Now they’re going to be able to bring all that back and only pay, at most, 8 percent on it. We tried that in 2004; we saw Bush do something similar. It did not create jobs. Multinationals took the money back. They used it to do shareholder buybacks that enriched their senior executives. But in this case, we’re going beyond that, beyond the margin. They’re going to have a global territorial tax. So, U.S. companies like General Electric, that realize more than 60 percent of their income from offshore, are no longer going to have to pay any tax on that at all, and, you know, whereas domestic companies are going to be stuck with the 15 percent rate.

This is going to be a tremendous boon to Trump’s own personal pocket, because the only reason he paid any taxes at all—we only have one tax year for him. That was from 2005. The only reason he paid any tax that year was really because of what’s called the alternative minimum tax. And he’s abolishing that under this plan. And all of his rich friends are actually also subject to that same alternative minimum tax.

So the list goes on and on. But basically this amounts to transferring the costs of essential services of government, the federal government, to middle class and the poor, that are not going to be able to benefit this. They’re going to be paying the debts that this plan will increase. And they’re going to also be watching as other countries around the world engage in this tax competition war that Trump has just initiated.

AMY GOODMAN: James Henry, I wanted to turn to the Pulitzer Prize-winning journalist David Cay Johnston, who obtained the first two pages of Trump’s 2005 tax returns. He appeared on Democracy Now! and talked about what they show.

AMY GOODMAN: So, that’s the journalist David Cay Johnston. In the New York magazine, the headline is “Trump Proposes Giant, Unfunded Tax Cut for Himself.” James Henry, elaborate on this.

JAMES HENRY: Well, I mean, that alternative minimum tax, as we just said, is one of the key elements of this. But I would also emphasize many other provisions here. The drop of the top rate to 35 percent for personal income taxpayers at the same time that they’re cutting the corporate rate to 15 percent is going to create this enormous incentive for rich people to park all their income in companies. And then, you know, they won’t pay any tax on it until it’s distributed. So, that’s just another—and they’ve also eliminated the pass-through tax, where income goes from corporate to personal use. So there are a lot of games that are going to be played by the very wealthy. But 90 percent of the benefits of this plan go to the top 1 percent of the population—that’s the clear—the shareholders of major companies, many of which are—most of which are multinationals, that are going to be actually given an incentive to offshore their businesses by this. This is actually going to increase the use of offshore havens by companies like Apple and Google, because there’s now a territorial tax. So, you know, on the whole—

AMY GOODMAN: I want to to turn to candidate Donald Trump speaking last year on the Today show about taxes.

VOICE OVER: A year ago, candidate Trump told Today he’d ask the wealthy to pay more.

SAVANNAH GUTHRIE: Do you believe in raising taxes on the wealthy?

DONALD TRUMP: I do. I do, including myself. I do.

JAMES HENRY: The president doesn’t keep his word on this or many other issues. I think his supporters should really be distressed about the fact that, going forward, they’re going to live in a country that is essentially much more unequal, where the costs of government are basically on their backs. We’ve tried this experiment before. We’ve had 30, 40 years of Arthur Laffer-type tax cuts, where they were supposed to pay for themselves. They never have. At most, this will pay for maybe one—you know, add a 0.2 percent of growth to the economy. But, overall, tax revenue will drop by up to $7 trillion over this next decade. And so we’re going to be saddled with increased debt, multinational companies that are now citizens of nowhere for tax purposes, and a much more unequal society.

AMY GOODMAN: So, what happens now? I mean, you have a $3 trillion deficit that this would cause. We’re talking about a Republican-controlled House and Senate, who are supposedly deficit hawks. You say you don’t think this will pass, but how do you see this playing out? And where can people weigh in?

JAMES HENRY: Well, I think there are a, you know, substantial number of Democrats who will oppose this just on principle and because of the track record we’ve had that this is going to cause huge deficits. This is really going to be a litmus test for the Republicans to, you know—I mean, they’re going to be put to a choice here. They are supposed to be interested in fighting deficits. But here we have—you know, I think, ultimately, this was what the election was all about. This is a land grab, essentially, by the ruling elites in this country. And I think, you know, the Republicans are—who said all along they were deficit hawks, are really going to be flushed out here. It may produce some of the same divisions we saw on the Obamacare matter. But, you know, ultimately, I’m pessimistic. I mean, I think, put to the test, many Republicans will just give up on their anti-debt principles.

AMY GOODMAN: Well, James Henry, I want to thank you for being with us. This is something we will continue to talk about. Tomorrow, we’ll be joined by Congressmember Welch, one of the members of the Congressional Progressive Caucus, also the single congressmember representing Vermont. James Henry, economist, lawyer, senior adviser with the Tax Justice network, former chief economist at McKinsey & Company. 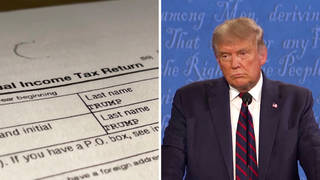