President Trump recently invited Philippines President Rodrigo Duterte to visit the White House, despite criticism from human rights groups over Duterte’s so-called war on drugs, during which thousands of people have been extrajudicially killed by police and vigilantes. Our guest, neuroscientist Carl Hart, recently attended a drug conference in Manila. He had to leave the Philippines after his life was threatened.

AMY GOODMAN: And finally, Dr. Carl Hart, I want to ask you about the Philippines, where you just came back from. President Trump recently visited—invited Philippines President Rodrigo Duterte to visit the White House, despite massive criticism from human rights groups over Duterte’s so-called war on drugs, during which thousands of people have been extrajudicially killed by police and vigilantes. Can you tell us what you found there?

CARL HART: When I was in the Philippines, the thing that I discovered is that it’s a lot worse than I originally thought it was. Duterte operates in intimidation. And so, not only is he the problem, but there are other political officials who are afraid to speak out. They are the problem. And Duterte has taken a page out of the 1980s U.S. drug war, in that he’s using drugs to separate people, the issue of drugs to separate the poor people from the people who have means. And he is allowing or providing the environment so people could kill, as you pointed out, kill people who are engaged in drug use and in drug trafficking. And people are afraid to speak out against this wrong, because Duterte has no qualms about having people’s lives be threatened. In fact, I discovered that people are being killed for as little as $100. It ranges from about $100 to $500 to have someone killed. And so, actually, I left the Philippines early because my life was threatened, because of me speaking out against what Duterte was saying about drugs and what he’s doing. And so, we have it bad in the United States, but the Philippines, I have never seen anything like the Philippines.

AMY GOODMAN: Professor Hart, explain more what happened to you and then your response to President Trump, to the shock of many, inviting the Philippines president, Duterte, to the White House.

CARL HART: So I gave a talk basically saying that what Duterte had said—he said that methamphetamine shrinks your brain, and this provided justification for people to kill people who use methamphetamine. And I said that was ludicrous. There’s no science to support that. He was upset about it. He responded. His people online, they responded with threats and that sort of thing. I didn’t think my statement was controversial, but turns out it was, because this is justification for killing people.

Now, for Trump to invite Duterte to the United States, given that this sort of thing is happening, it’s just consistent with what Trump has been doing. Trump has been—has shown himself to be the most ignorant president that we’ve ever had. He has shown himself to be the one that disregards law more so than any other president we’ve had. So it’s just consistent. It would be nice if Democrats and people who are in power, particularly people who know something about the law, to figure out a legal way to restrain him or get rid of him. It’s just inappropriate for him to behave like that at that level.

AMY GOODMAN: Professor Carl Hart, I want to thank you for being with us, chair of the Department of Psychology, professor of psychiatry at Columbia University, author of High Price: A Neuroscientist’s Journey of Self-Discovery That Challenges Everything You Know About Drugs and Society. Professor Hart just returned from the Philippines, where he was threatened with his life. And Anthony Papa, thanks so much for being with us, author of This Side of Freedom: Life After Clemency, anti-drug-war activist, painter and author. Thanks so much for joining us.

This is Democracy Now! When we come back, the massive Palestinian hunger strike. We’ll speak with the son of the leader of that strike, the son of Marwan Barghouti, who’s been imprisoned by Israel for more than 15 years. Stay with us. 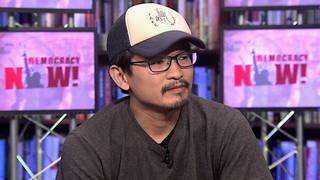 “Stop the Killings”: Photojournalist Raffy Lerma on Duterte’s Deadly War on Drugs in the Philippines