The Inter-American Commission on Human Rights in Washington, D.C., has agreed to open a case against the U.S. government for the murder and cover-up of Anastasio Hernández Rojas, who was killed by border agents seven years ago. Hernández Rojas died as he tried to cross the border to return to San Diego, where he had lived for 25 years and had fathered five children. The San Diego Coroner’s Office classified Anastasio Hernández Rojas’s death as a homicide, concluding he suffered a heart attack as well as “bruising to his chest, stomach, hips, knees, back, lips, head and eyelids; five broken ribs; and a damaged spine.” We speak to Christian Ramirez, the director of Southern Border Communities Coalition and human rights director of Alliance San Diego.

We turn now to an unprecedented effort to hold the United States responsible for violence committed by its Customs and Border Protection agents. Seven years ago, in May 2010, a Mexican immigrant named Anastasio Hernández Rojas tried to cross the border to return to San Diego, where he had lived for 25 years and had fathered five children. He was then stopped by Border Patrol agents. He would never see his children again.

The agents said Hernández Rojas had become hostile and resisted arrest, but eyewitness video showed the agents beat and tasered him.

Footage of Hernández Rojas’s death was obtained by reporter John Carlos Frey and aired in a 2012 PBS report by correspondent John Larson.

JOHN LARSON: What U.S. border agents did not realize is that eyewitness videos of the incident caught the sounds of Hernández Rojas screaming and pleading for his life.

JOHN LARSON: And now, a never-before-seen eyewitness video of the incident raises new disturbing questions. The dark video reveals more than a dozen U.S. border agents standing over Hernández Rojas. It shows the firing of the Taser. Was Hernández Rojas, as the police press release suggested, combative when he was killed? Or was he on the ground, handcuffed?

AMY GOODMAN: That’s video from the PBS program Need to Know. The San Diego Coroner’s Office classified Anastasio Hernández Rojas’s death a homicide, concluding he suffered a heart attack as well as, quote, “bruising to his chest, stomach, hips, knees, back, lips, head and eyelids; five broken ribs; and a damaged spine.” Despite these findings, the Department of Justice announced in 2015 there was insufficient evidence to pursue federal criminal civil rights or other federal charges against the agents.

Well, today the family of Anastasio Hernández Rojas has reached another milestone in their quest for justice. Just after this broadcast, the group Southern Border Communities Coalition will hold a press conference to announce Rojas’s family has successfully filed a petition with the Inter-American Commission on Human Rights in Washington, D.C. That right—the Commission has agreed to open a case against the U.S. government for the death of Rojas.

Christian, welcome to Democracy Now! Talk about this latest news.

CHRISTIAN RAMIREZ: Thank you for having me, Amy. This is an unprecedented move by human rights organizations in the United States. This is the first time that the United States government is facing accusations in an international forum for an extrajudicial killing. We are terribly saddened that we had to reach this point in which we had to go to an international arena to seek justice as a result of seven long years of waiting for justice to be served, first under the Obama administration and now under the Trump administration. The patience in the family has run out, and we have—left with no other choice but to go to the Inter-American Commission on Human Rights. And now the Trump administration has three months to respond to the petition that was filed by the family a bit over a year ago.

AMY GOODMAN: What can this world body do, Christian?

CHRISTIAN RAMIREZ: Well, what this body does is hold the U.S. government accountable. They cannot reopen any criminal investigation. But it is, in essence, a body that shames a member of the Organization of American States for committing acts of human rights violations. And it’s important to note here that despite the fact of a pattern, a long pattern, of abuse committed by U.S. Border Patrol, that this is the first time, if we are fully successful in forcing the U.S. government to respond to the Inter-American Commission on Human Rights, that this international body can provide guidance to the U.S. government to make sure that these sorts of violations never occur in our country, and to, in essence, shame the United States government for not following its obligations before the Organization of American States.

AMY GOODMAN: Last year, Democracy Now! spoke to Bernardo Hernández Rojas on the day his family announced they had filed a petition with the Inter-American Commission on Human Rights.

BERNARDO HERNÁNDEZ ROJAS: [translated] We’re here to file with the Inter-American Commission on Human Rights this petition. So it’s to follow up on Anastasio’s case, because this cannot be just left like this—it is an injustice—for, during these five years, we have also met other people who have gone through the same thing, and many very similar things continue to happen at the border. We want this to stop. We want them to stop these injustices. And we want a response from the government as to what’s happening with my brother’s case and why have they not responded with good news.

AMY GOODMAN: Bernardo Hernández Rojas explained why he hoped the Inter-American Commission on Human Rights would take on his brother’s case.

BERNARDO HERNÁNDEZ ROJAS: [translated] What I would like to come out of this is that penalties be imposed on the officers, that they stop doing this, that everybody know. Well, it’s already known what happened. But a great many injustices are happening at the border. One of these is my brother’s case, and they have not resolved anything. Something is happening here. The agents don’t want to show their face. It’s not been possible to punish them. They, too, need to uphold the law, like any human being. They need to confront the justice system. If I commit a crime, I need to confront the justice system, and it should be that way for everyone across the board.

AMY GOODMAN: I want to play more from PBS’s Need to Know interview with a second eyewitness who had used her phone to document the beating of Anastasio Hernández Rojas.

JOHN LARSON: We took the video to Gene Iredale, the Hernández Rojas attorney, who had never seen it before. He said the critical moment is this one.

EUGENE IREDALE: When you’re using force and you know you have to explain it, or it has to appear someway to the people who are watching, you say, “Quit resisting.”

AMY GOODMAN: That’s from Need to Know. But, Christian, I wanted to ask you about this latest news that the Trump administration is seeking to loosen hiring requirements to beef up Border Patrol.

CHRISTIAN RAMIREZ: Well, this is what’s most troubling about the policies of border enforcement in our country, Amy. Just today, House Republicans will move forward a bill to waive a polygraph—polygraph testing for new recruits at Customs and Border Protection. And we have to be reminded of the fact that we’re talking about the largest law enforcement agency and also one of the most corrupt agencies in this country. Law enforcement leaders have established that Customs and Border Protection must implement immediately mechanisms to hold its agents accountable, in order to prevent corruption. And at least 200 Customs and Border Protection agents have been prosecuted for corruption in the United States. We are talking about an agency that has absolute powers, that is the largest agency in the United States. And now the House Republicans want to get rid of an absolutely necessary tool to ensure that whoever is wearing a badge and a gun and patrolling the borderlands, you know, is vetted accordingly so that we don’t have corruption and use-of-force issues like the ones that claimed the life of Anastasio Hernández Rojas and 50 other unarmed civilians along the borderlands under the Obama administration. 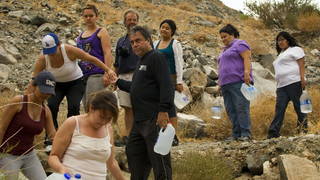