Attorney General Jeff Sessions and Secretary of Homeland Security John Kelly recently visited the San Diego-Tijuana border, where they vowed to crack down on sanctuary cities and urged local officials to cooperate fully with federal immigration agents. We speak to Enrique Morones, executive director and founder of Border Angels.

AMY GOODMAN: I wanted to move on right now. Attorney General Sessions and Secretary of Homeland Security John Kelly recently visited the San Diego-Tijuana border, where they vowed to crack down on sanctuary cities and urged local officials to fully cooperate with federal immigration agents. This is Sessions, followed by Kelly, speaking at a news conference here in San Diego last month.

ATTORNEY GENERAL JEFF SESSIONS: We’d like our cities, that are being tempted by this sanctuary ideology, to re-evaluate what they’re doing.

HOMELAND SECURITY SECRETARY JOHN KELLY: Our efforts are working. As I reported back in March, we’re—we’ve seen a dramatic reduction in illegal migration across the southwest border. In fact, March apprehensions were 30 percent lower than February apprehensions. This is an overall reduction of 64 percent over last year. These numbers are lower because DHS and DOJ have shown that we’re serious about border security and enforcing our immigration laws.

AMY GOODMAN: Immigrant rights advocates gathered near the U.S.-Mexico border wall to protest Sessions and Kelly’s visit to San Diego, holding signs saying, “Immigrants make America Great.” Last month, the Department of Justice threatened to cut off funding to California, as well as eight cities and counties across the United States, ramping up the Trump administration’s crackdown on sanctuary cities.

AMY GOODMAN: Last month, a longtime migrant justice activist, Hugo Castro of Border Angels, was found alive in Mexico City after he disappeared five days earlier, after calling for help on a Facebook Live video, saying that his life was in danger. Can you talk about what’s happened to Castro since? He’s back in the United States. He’s been hospitalized. You just saw him, Enrique?

ENRIQUE MORONES: That’s right. Well, Hugo is a longtime Border Angel, also a person that’s lived in this region for a long, long time. And I remember when I took him to the border about a month ago as he was going to join a caravan in Mexico for human rights, because human rights are something that should be protected worldwide. Suddenly, a few days later, he sends the video. We all see it. It’s a haunting video. And we’re terrified. Hugo was born in Salinas, California. He’s been active on these issues. He had had his life threatened about two months ago in Tijuana, because we have a program called S.O.S. Migrante to help our Haitian brothers and sisters that are in Tijuana, that had been planning to come to the United States but now have settled in northern Mexico.

Well, Hugo was finally found about a week after he disappeared. He was hospitalized in Mexico City. And about a week after that, he was transferred to a hospital here in San Diego. He’s doing a lot better. We don’t know the details of exactly what happened just yet. I’ve seen him several times. He’s all beat up. He has broken ribs, a leg. He has multiple damage to his face, to his head. And we’re so glad that he’s alive. We’re so glad that he’s found. He’s getting better every day. And we really appreciate all the prayers and concern and the cooperation of authorities on both sides of the border, because we thought, like with Mr. Valdez in Culiacán, where my family is from, that maybe he wouldn’t be found again or he’d be found without life. But, thank God, he was found alive. Thank God that he’s here in San Diego, and he’s getting better every day.

AMY GOODMAN: Before we go, the work of Border Angels, what you do and what kind of response you’re getting, now with the crackdown on immigrants, the response of support from communities?

ENRIQUE MORONES: Well, Amy, as you know, Border Angels has been around for more than three decades. It was founded right here in San Diego. And never have we been busier than we are today. Since November 8th, when we heard the terrible news about Donald Trump, people have been pouring in to our office. They have been asking, “What’s going to happen now? I’m a recipient of DACA. The government has my information. What’s going to happen on January 20th, when Donald Trump becomes the president?” We had to tell them, “We don’t know.” He’s so unpredictable. He’s somebody that does not follow logic, somebody that has really caused a tremendous amount of fear in the community. And we’re based—Border Angels is based in a working-class community with an elementary school across the street. And now mothers are scared to take their children to school, because they fear what could happen to them because of their immigration status. So, documented and undocumented people are living in terrible fear. We don’t know what’s going to take place.

And we at Border Angels, like a lot of other organizations, are continuing to comfort, to give free legal advice to these communities. And we have seen a dramatic increase not only in the fear, but also in people rising up. When we go out and put water in the desert, which we’ve been doing for more than 20 years, we normally would have 20 or 30 volunteers. Now we’re getting 300 and 400 volunteers to put water in the desert. We offer free immigration services. Three or four people would come by our office—

AMY GOODMAN: Water in the desert for people who are coming over the border from Mexico, so they don’t die of thirst.

AMY GOODMAN: Enrique Morones, we have to leave it there, but it’s certainly an issue we’ll continue to follow, executive director and founder of Border Angels. And Christian Ramirez, Southern Border Communities Coalition, with—and also with Alliance San Diego.

When we come back, we look quickly at the nuclear plant San Onofre and what’s going to happen to the radioactive waste. Stay with us. 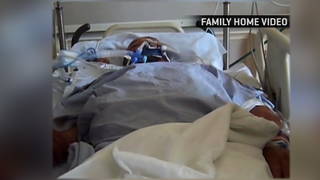