Since 2000, more than 100 journalists have been murdered in Mexico. A recent report by the International Institute for Strategic Studies says that Mexico endured the second most conflict deaths of any country in the world last year, with a staggering 23,000 people killed amid the country’s so-called war on drugs. Mexico was second only to Syria, where 50,000 people were killed in 2016 by the ongoing war. The third, fourth and fifth most dangerous countries were Iraq, Afghanistan and Yemen. We speak with Mexican journalist Anabel Hernández, who has faced attacks and death threats for her reporting on the Mexican drug trade and has said, “A journalist who has to walk with bodyguards is an embarrassment for any nation.”

AMY GOODMAN: We’re joined right now by a colleague and friend of Javier, the award-winning Mexican journalist Anabel Hernández. She has also faced attacks and death threats for her reporting on the Mexican drug trade and has said, quote, “A journalist who has to walk with bodyguards is an embarrassment for any nation,” unquote. Hernandez is the author of Narcoland: The Mexican Drug Lords and Their Godfathers, as well as Mexico in Flames: The Legacy of Calderón.

Anabel Hernández, welcome to Democracy Now! We’re speaking to you in Rome, Italy, so there’s a little bit of a delay. But can you talk about who Javier was, the reporter who was gunned down this week right next to the offices of the newspaper he founded in Sinaloa, Mexico?

ANABEL HERNÁNDEZ: Hello, Amy. It really has been very sad days for me and for hundreds of journalists in Mexico, because Javier Valdez is our friend. And Javier Valdez will be always be our colleague. You hear his words in this speech in 2011. And this is Javier, a very brave man. This is Javier, the journalist that believed in the courage to work for the society, Mexican society, that needs the information to take their—in liberty, their own decisions. Javier Valdez is my friend. I met him many years ago. I saw him the last time at the beginning of this year. And he was laughing, as he used to do. And he was worried, as me, about all this violence in Sinaloa. He was worried about the war inside the Sinaloa Cartel after the arrest of “El Chapo” Guzmán on January of 2016 and after, of course, his extradition to this federal court in New York. So, Javier was, is—was and is and will be always a very honest journalist and a friend, a brother for me.

AMY GOODMAN: So talk about his newspaper, where he was gunned down. And talk about what he was taking on in Mexico and who you believe killed him.

But as you know, the problem of being a journalist in Mexico is when you always try to talk about one cartel, always you have to talk about all the people that works in the government that is involved with the cartel. And this is the case, I have to say, and I have to reveal for the first time, about Dámaso López Núñez, that has family—members of his family works in the government of Sinaloa. So, if it is the hypothesis that maybe people related with Dámaso López Núñez were involved in this terrible murder, I think that this cannot be possible if someone of the Sinaloa government, or even the federal government, is not involved, because I also have information—I have a video that proves this—that also in the payroll of Dámaso López Núñez were high members of the federal police, that belongs to the federal government, to the government of Enrique Peña Nieto.

I have heard that the government tried to say that, “Oh, no, no, no. It was just two guys that tried to stole the car of Javier Valdez.” But, you know, this attack was at noon, I mean, in front of everyone. And no one shoots 10 times, 10, 12 times, to steal a car, even in Sinaloa. No one [inaudible].

AMY GOODMAN: So you’re saying the Sinaloan government might have been involved in Javier’s murder.

ANABEL HERNÁNDEZ: I think it’s one of my hypotheses. I really try to—and now I am in Rome, and I will be in London giving some conference with my colleague Lydia Cacho. And then I will go back to Mexico. I really want to meet—to have a meeting with the wife of Javier and try to help to resolve this, because I think that the problem is that, as you know, more than six journalists have been murdered this year—six just in these five months. So I think that, for me—for me, the murder of my friend Javier Valdez is something personal. And I think that if we don’t resolve this case, I mean, we are condemning to other journalists to be murdered as now, as until now.

AMY GOODMAN: We’re talking to Anabel Hernández, an incredibly brave Mexican investigative reporter herself, who was awarded the 2012 Golden Pen of Freedom Award, author of Narcoland: The Mexican Drug Lords and Their Godfathers. Understand that when she says she’s going back to Mexico, the threat she, too, faces as she is surrounded by 24-hour-a-day bodyguards, as she talks about the death of Javier Valdez, murdered this week, another unbelievably brave journalist in Mexico. We’re going to come back to our discussion with her. We have one more break.

And this breaking news: Roger Ailes, the head of Fox News, the former head, who was driven out because of sexual assault and sexual harassment scandals, one after another, Fox women talking about his assaulting them or harassing them over the years—well, Roger Ailes himself has died at the age of 77. All the media is reporting this right now. We don’t know the cause of his death.

But I wanted to go back, Anabel, to you saying you’re going to return to Mexico. When you’re in Mexico, you need 24-hour-a-day guards. Who are these guards? Talk about the threats to your own life, even as you remember today Javier Valdez, the crusading reporter who wrote for La Jornada, took on the drug trade in Mexico, who was gunned down himself in his home state of Sinaloa this week.

ANABEL HERNÁNDEZ: Well, as you know, I was collaborating with an investigative reporting program in UC Berkeley for two years. But since last August, the program finished for me, and I had to go back to Mexico. So I am living in Mexico since last August. So I have to went back to my nightmare. I mean, now I am in Italy, because I’m working. But when I finish this travel, I have to go back anyway to Mexico. I have to live with these bodyguards.

And these bodyguards are paid by the federal government, in this terrible and cynical simulation of protections—of protection. As you know, the federal government created one mechanism to supposedly protect to the journalists. But even they have all the names, even they have all the faces, the people that have been threatening me, that want to kill me, since 2010, and have been attacking me, to me and my family, every moment, every year, even the government have all this information, they don’t want to resolve the case.

I will tell you something very, very, very absurd. Just two weeks ago, the last message from the federal government to me was gave me—the bodyguards gave me one bullet-proof vest to protect myself. Imagine that someone came and shoot me 10 or 12 times, as happened to my friend Javier Valdez. Is really this vest that will protect me, or the justice, or put in jail to the people that are threatening me and threaten many, many other journalists in Mexico?

So, really, the crisis in Mexico is huge. Just a few days ago—yesterday, to be exact precisely, the president, Enrique Peña Nieto, promised to the society—promised to the journalists that he will resolve the case. It’s not true. I know the people that is working in the Attorney General’s Office. I know that they are not interested. Even they have all the information. So I think we have to stop the simulation. And if the government is not able to resolve the cases, we will do it. And we will have to do it in many, many other cases of abuse of power, human rights—human rights violations and other things like the case of Iguala, the 43 missing students.

AMY GOODMAN: Anabel, I want to ask you about another recent attack on journalists. On Saturday, in the southern state of Guerrero, a group of reporters was attacked, robbed and threatened by a group of armed men. This was Saturday. The attack occurred outside Iguala, where 43 students were disappeared from the Ayotzinapa teachers’ college in 2014. The journalists, who all survived the attack this weekend, said the men threatened to burn them alive. Anabel, you know Iguala well from your groundbreaking reporting on the disappearance of these 43 students. Can you talk about this recent attack? And let me say, we just have a minute to go, I’m sad to say.

AMY GOODMAN: Anabel Hernández, I want to thank you so much for being with us, Mexican investigative reporter, awarded the 2012 Golden Pen of Freedom Award, author of Narcoland: The Mexican Drug Lords and Their Godfathers, her latest book, The True Night of Iguala. Thanks so much for joining us from Rome. Please be safe when you return to Mexico, as she talks about the assassination of Javier Valdez just this week in Mexico.

And this breaking news: Former chair of Fox is dead at the age of 77. Roger Ailes has died. We don’t know yet the cause of his death. Ailes resigned from Fox News in July, accused of sexual harassment by more than 20 women, including Fox News anchors Megyn Kelly, Andrea Tantaros, Gretchen Carlson. Fox ultimately paid out $45 million to settle the claims. Ailes served as a Republican Party operative, advising many presidents.

That does it for our show. I’ll be speaking at Skylight Books today at noon. 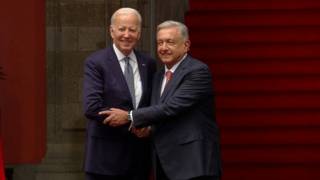