The Intercept: As the U.S. Ramps Up Airstrikes on ISIS, Are Syrian Civilians Paying the Price?

A civilian monitoring group says U.S.-led airstrikes killed more than 100 civilians—including 47 children—on Thursday and Friday in the ISIS-held town of Al Mayadeen in eastern Syria. This comes as U.S. Defense Secretary James Mattis says the U.S. is shifting to “annihilation tactics” in its fight against ISIS. But as the U.S. ramps up airstrikes, are Syrian civilians paying the price? That is the question posed by The Intercept reporter Murtaza Hussain, whose latest piece is headlined “The U.S. Has Ramped Up Airstrikes Against ISIS in Raqqa, and Syrian Civilians Are Paying the Price.”

NERMEEN SHAIKH: We turn now to Syria, where the Associated Press reports that the Russian Defense Ministry has said a Russian warship and a submarine have fired four cruise missiles from the Mediterranean to hit Islamic State manpower and equipment near the Syrian city of Palmyra. This comes as a monitoring group says U.S.-led airstrikes killed more than a hundred civilians, including 47 children, on Thursday and Friday in the ISIS-held town of Al Mayadeen in eastern Syria. The Syrian Observatory for Human Rights says the two rounds of strikes targeted the families of ISIS fighters and that the vast majority of the victims were women and their children. The U.S.-led coalition has acknowledged launching the airstrikes. On Sunday, Secretary of Defense James Mattis told CBS News’ Face the Nation that the U.S. is shifting to, quote, “annihilation tactics” in its fight against ISIS.

DEFENSE SECRETARY JAMES MATTIS: Our strategy right now is to accelerate the campaign against ISIS. It is a threat to all civilized nations. And the bottom line is, we are going to move in an accelerated and reinforced manner, throw them on their back foot. We have already shifted from attrition tactics, where we shove them from one position to another in Iraq and Syria, to annihilation tactics, where we surround them.

RUPERT COLVILLE: The rising death toll of civilians and injuries to them already caused by airstrikes in Deir ez-Zor and in al-Raqqa governorates suggest that insufficient precautions may have been taken in the attacks. And just because it’s ISIL controlling an area, that doesn’t mean less care can be taken. Just because it’s a particularly unpleasant and horrendous group in charge, it doesn’t mean those trying to wrest control of an area from them should take any less care with the civilians living in that area.

NERMEEN SHAIKH: The journalistic monitoring group Airwars estimates that U.S.-led coalition strikes in Syria and Iraq have killed between 3,000 and over 5,000 civilians in the past several years, with a significant spike in civilian casualties since January. The coalition has reportedly carried out some 9,029 strikes in Syria since 2014. Recent attacks have hit civilian targets, including packed schools and mosques.

AMY GOODMAN: The United States and its allies are now reportedly preparing for a major offensive against Raqqa, the last urban stronghold of ISIS in Syria, raising concerns about increased civilian casualties.

For more, we’re joined by Murtaza Hussain, a reporter with The Intercept whose latest piece is headlined “The U.S. Has Ramped Up Airstrikes Against ISIS in Raqqa, and Syrian Civilians Are Paying the Price.”

Murtaza, thank you so much for being with us. You start your piece talking about the al-Aish family. Tell us who they are and what happened to them.

MURTAZA HUSSAIN: There are 200,000 civilians still trapped in Raqqa, and the al-Aish family was one of them. They attempted fleeing Raqqa in April, and they were unfortunately killed in a U.S. airstrike, which killed a number of women and children who were outside the town of Tabqa, which is in the suburbs of Raqqa. People living in and around Raqqa are facing an extremely dire situation at the moment. They’re targeted from the air by U.S. airstrikes and on the ground by ISIS militants, who are trying to stop them from fleeing the city.

AMY GOODMAN: And you’ve said that, in fact, over 9,000 strikes the U.S. has carried out. I mean, we don’t hear very much about U.S. airstrikes. Can you give us a sense of how that compares to Russia, for instance, about which we hear all the time?

MURTAZA HUSSAIN: In April, the U.S. carried out a cruise missile strike after the chemical weapons attack in a small town in Syria, but that was only one of many, many thousands of strikes that have happened since 2014 by the United States, targeting not the Syrian government, but militant groups in the country. And these strikes have killed thousands and thousands of people. The Russian government carried out a very brutal campaign in Aleppo to help the Syrian government regain control of that city. And it seems that, since January, the United States is in some ways copying the Russian strategy of ramping up airstrikes, and with, what we’ve seen, a corresponding increase in civilian casualties throughout the country. Russia’s campaign was very brutal, and it took place in full view of the world. And now we’re seeing a similar campaign by the United States as it seeks to take ISIS out of its last urban stronghold in Raqqa.

AMY GOODMAN: What’s your response to those who say that the U.S. is actually protecting civilians from ISIS by attacking Raqqa?

MURTAZA HUSSAIN: Civilians are trapped in a very desperate situation right now, because ISIS is clearly extremely brutal towards people in its control, including in Raqqa. The difficulty is that the U.S. campaign is supposed to be about liberating civilians. And if it operates with wanton disregard towards them, killing thousands of people, the moral boundaries start to evaporate, because ISIS is killing these people for fleeing, and the United States is killing them, in many cases, while they’re also trying to flee. Any campaign which is predicated on protecting civilians needs to ensure that they’re not killed in these attacks. And unfortunately, what we’ve seen in the last few months are spiking death tolls in Syria from these strikes. And the only thing you can conclude are that the United States is loosening its protections around these civilians.

AMY GOODMAN: Murtaza Hussain, we want to thank you very much for being with us, reporter at The Intercept. His latest piece, “The U.S. Has Ramped Up Airstrikes Against ISIS in Raqqa, and Syrian Civilians Are Paying the Price.” This is Democracy Now!, democracynow.org, The War and Peace Report. I’m Amy Goodman, with Nermeen Shaikh. 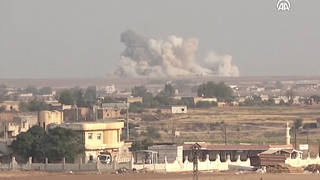