We end today’s show looking at the real estate dealings of another one of Donald Trump’s closest associates: Thomas Barrack. Last week, the reporter Aaron Glantz of the investigative news site Reveal exposed how Barrack profited off the housing crisis by buying 31,000 single-family homes—mostly foreclosures—then bumped up the rents and in many cases allowed the properties to fall into disrepair. Glantz reported that Barrack’s actions as head of Colony Starwood Homes made him tantamount to a modern-day slumlord. On Friday—one day after Glantz’s piece was published—Barrack sold all of his stock in Colony Starwood Homes and resigned his position as co-chair of its Board of Trustees.

JUAN GONZÁLEZ: We end today’s show looking at the real estate dealings of another one of Donald Trump’s closest associates: Thomas Barrack. Last week, the reporter Aaron Glantz of the investigative news site Reveal exposed how Barrack profited off the housing crisis by buying 31,000 single-family homes—mostly foreclosures—then bumped up the rents and in many cases allowed the properties to fall into disrepair. Glantz reported that Barrack’s actions as head of Colony Starwood Homes made him tantamount to a modern-day slumlord.

AMY GOODMAN: On Friday, one day after Aaron Glantz’s piece was published, Tom Barrack sold all of his stock in Colony Starwood Homes and resigned his position as co-chairman of its board of trustees.

To talk more about his piece, Aaron Glantz joins us from San Francisco. He’s senior reporter at Reveal.

Aaron, so, your piece looks like it certainly had a major effect, but explain what you found.

AARON GLANTZ: Well, Tom Barrack is one of Donald Trump’s oldest and closest friends. He introduced Ivanka Trump at the Republican National Convention. He planned Trump’s inauguration. And if you watched Donald Trump take the oath of office, he was actually standing right behind the Trump family as Trump was sworn in. And The New York Times said that he’s one of the few people that Donald Trump trusts.

So, I started to look into this guy’s real estate business. And he’s one of these real estate businessmen who has made his career on profiting off of other people’s pain. And his big play after the Great Recession was to start buying up foreclosed homes all over the country, which used to be owned by families, and turn them into rentals. And so, the company that he founded eventually became known as Colony Starwood Homes, with 31,000 homes across 10 states. And I started to get especially interested in this company after the Federal Reserve Bank of Atlanta found that in one county in the Atlanta area, Fulton County, this company had filed eviction notices against one-third of its tenants.

AMY GOODMAN: Tell us the story of one woman who was holding her infant in bed when an air conditioner fell out of the ceiling onto them.

AARON GLANTZ: Yeah, this was Makita Edwards. It was a ceiling fan. And it was representative, in a number of ways, of the stories that I heard going door to door in Atlanta, where this company owns 6,000 homes, and also in Los Angeles, where they control about 4,000 homes. These were foreclosures—right?—so they were not in the best of shape to begin with. The families who owned them before couldn’t necessarily take care of them as well as they would like. And then, when we looked at the SEC filings of this company, Colony Starwood Homes, we found that they spent, on average, just $800 a year per home on maintenance.

So, this family moves in last August. They live without heat. They have a roof that leaks. They keep calling and calling an 800 number for Waypoint Homes, which is the trade name that this company operates under. And then one day she’s lying in bed with her newborn baby, and the ceiling, which has been leaking—the ceiling fan just falls on their bed.

And the other important thing about this family, and just listening to Alec talk about the fees that were charged by Kushner’s company, fees became a very important revenue source for this company, as well. Their SEC filings show last year they charged $26 million in fees and tenant clawbacks last year. And when you look into why it is that they were able—that they filed so many eviction notices against their tenants, and you talk to tenants like Makita Edwards, who got eviction notices in six straight months, they end up in this cycle of eviction notices and late fees. So they were late on their rent the very first month they moved in, and suddenly they have a $95 late fee. They’re asked to pay the landlord’s court costs. They’re asked to pay the landlord’s lawyer’s fees. They’re even asked to pay the process server who served them with the eviction notice—almost $200 on top of their rent. They pay that. They’re allowed to stay. But now they’re late on the next month’s rent. And now they have another $200 in late fees and other charges. And this goes on for six months, even as they’re living in these really uninhabitable conditions.

JUAN GONZÁLEZ: And, Aaron, there have been other investor groups, like Blackstone, that after the Great Recession started buying up foreclosed homes. Do you discern anything different about how this company was dealing with the homeowners? Are they trying to get everybody out to then sell the homes once the housing market recovers?

AMY GOODMAN: Aaron, we just have 20 seconds, but Tom Barrack stepped down after your piece.

AARON GLANTZ: Yes, that’s right. He, late Friday—our piece ran on Thursday morning, and late Friday he sold all of his stock in this company that we’re talking about and resigned from its board of trustees. So, he is moving on to other pastures. He made a lot of money off of selling his stock. And now the tenants in these 31,000 homes are left to wonder what’s next, now that the creator of this, the friend of the president, is moving on.

AMY GOODMAN: Aaron Glantz, I want to thank you for being with us, senior reporter at Reveal. We’ll link to your piece.

And a very special thanks to Nicole Salazar, who produced our Puerto Rican Day Parade piece. 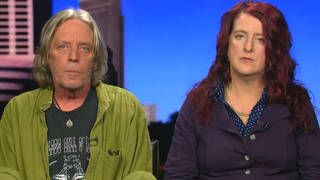