Capitol Hill remains in shock after House Majority Whip Steve Scalise of Louisiana and four other people were wounded on Wednesday, when a gunman opened fire at a baseball field in Alexandria, Virginia. The lawmakers were practicing for a charity congressional game that will take place tonight. Scalise, the third-ranking Republican in the House, was shot in the hip and remains in critical condition.

NERMEEN SHAIKH: We begin today’s show on Capitol Hill, which remains in shock after House Majority Whip Steve Scalise of Louisiana and four other people were wounded on Wednesday when a gunman opened fire at a baseball field in Alexandria, Virginia. The lawmakers were practicing for a charity congressional game that will take place tonight. Scalise, the third-ranking Republican in the House, was shot in the hip and remains in critical condition. Speaking on CNN, Republican Senator Rand Paul of Kentucky gave this chilling eyewitness account of the shooting.

SEN. RAND PAUL: I’m in right field. I’m at the farthest point on the field of anybody from the gunshots. But the gunshots are still hitting in the dirt in right field, where there are two staffers laying on the ground. I think one of them may have been hit. But there are—between me and them is about a 15-, 20-foot fence. So, one of the staffers decides, “The heck with this, I’m not staying here. The bullets are flying all around me.” He decided to climb the fence, and he climbed a 20-foot fence in about three seconds, plopped down behind me. And there was a big oak tree behind the batting cage. He and I are behind the oak tree. But the gunshots are still going in the dirt in right field in the warning track, so about five or 10 feet from us.

And at some point, I’d say 50 or 60 shots, at least, have been fired from the shooter. And then we start to hear the Capitol Hill police respond. And theirs is a different weapon, so you hear pistol shots going back at the shooter. I can tell you that I think, with absolute certainty, nobody would have survived without the Capitol Hill police. They saved everybody’s life, incredibly brave, and deserve everyone’s praise, because with this guy, who knows what his—how heavily armed he was? But nobody else had a weapon, so he was just killing everyone.

AMY GOODMAN: The gunman has been identified as a white 66-year-old man named James Tommy Hodgkinson. He was shot dead in a firefight with two Capitol Hill police officers, Crystal Griner and David Bailey, who have been credited with saving all of the congressmembers’ lives. Hodgkinson was a retired building inspector from Belleville, Illinois, who’s been a vocal critic of Donald Trump online. In one recent Facebook post, he wrote, quote, “Trump is a Traitor. Trump Has Destroyed Our Democracy. It’s Time to Destroy Trump & Co.”

NERMEEN SHAIKH: Hodgkinson had received a license to have a gun earlier this year despite a history of violent behavior. In 2006, he was arrested for domestic battery and discharge of a firearm. Soon after Wednesday’s shooting, Virginia Governor Terry McAuliffe called for more gun control.

GOV. TERRY McAULIFFE: Let me say this: I think we need to do more to protect all of our citizens. I have long advocated—this is not what today is about, but there are too many guns on the street. … Background checks, shutting down gun show loopholes. You know, that’s not for today’s discussion, but it’s not just about politicians. We worry about this every day for all of our citizens.

AMY GOODMAN: Senator Bernie Sanders took to the Senate floor Wednesday after reports emerged indicating the gunman had once volunteered for his presidential campaign.

SEN. BERNIE SANDERS: [I have just been informed] that the alleged shooter at the Republican baseball practice this morning is someone who apparently volunteered on my presidential campaign. I am sickened by this despicable act. And let me be as clear as I can be: Violence of any kind is unacceptable in our society, and I condemn this action in the strongest possible terms. Real change can only come about through nonviolent action, and anything else runs counter to our most deeply held American values. I know I speak for the entire country in saying that my hopes and prayers are that Representative Scalise, congressional staff and the Capitol police officers who were wounded make a quick and full recovery. I also want to thank the Capitol police for their heroic actions to prevent further harm.

AMY GOODMAN: We go now directly to the Capitol, where we’re joined by the longest-serving member of Congress, Detroit Congressmember John Conyers. He’s served in Congress since 1965.

Congressman Conyers, welcome back to Democracy Now! Can you respond to what took place yesterday, the attack on your fellow congressmembers? It looks like Steve Scalise is in critical condition. An aide to another congressman was shot in the leg. It was two Capitol police officers who were there only because Scalise, the number three man in the leadership, has a security detail. And they opened fire on the gunman, killing him. Congressmember John Conyers, we’re going to break and then come back to our discussion, not only about what happened at the Alexandria ballfield, but also your introduction of a major lawsuit. A hundred ninety-six members of Congress have sued the president of the United States. We’ll find out why in a moment. 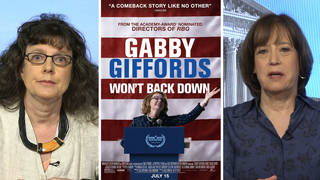