The race for the 6th District in Georgia is the most expensive congressional race in U.S. history. On Tuesday, voters will head to the polls to fill the seat left vacant after Tom Price resigned to become secretary of health and human services. Polls show Democrat Jon Ossoff and Republican Karen Handel in a virtual tie. But civil rights leaders fear that racist voter suppression tactics could cost Ossoff the election. For more, we speak with investigative reporter Greg Palast and air a report he produced in Georgia.

NERMEEN SHAIKH: We’ll be joined by Congressman John Conyers in a few minutes, but first we turn to look at the most expensive congressional race in U.S. history, the race for the 6th District in Georgia. On Tuesday, voters will head to the polls to fill the seat left vacant after Tom Price resigned to become secretary of health and human services.

AMY GOODMAN: While polls show that the Democrat, Jon Ossoff, and the Republican, Karen Handel, are in a virtual tie, civil rights leaders fear that racial voter suppression tactics could cost Ossoff the election. We turn now to a report from investigative reporter Greg Palast.

HANDEL SUPPORTER: That’s who lost the war for us: Jane Fondas and that group, their whole lefty. And they had the media, too, and lie, cheat. People who had drug problems, baby killers—that was all a lie.

This is 30-year-old Democratic candidate Jon Ossoff, who fell just 2 percentage points short of winning this race outright in the first round. This should be an easy win for Ossoff. Some experts fear skullduggery.

DEE HUNTER: To be very clear, Jon Ossoff would be the congressional member right now. He really would have won the previous special election but for a combination of systemic voter suppression tactics and techniques.

DEE HUNTER: The district itself was gerrymandered. The Republican leadership have been very clear that they gerrymandered this district in order to ensure that it would be held by a Republican.

GREG PALAST: And the gerrymander was overtly racist. This is Laughlin McDonald, who was attorney for the ACLU.

LAUGHLIN McDONALD: The chair of the House Redistricting Commission, and he says, quote, “I am not for drawing [bleep] districts,” end-quote. That was his quote. And that’s what the court of—the D.C. three-judge court cited to support its finding that he was a racist.

GREG PALAST: So how did it happen that a Democrat is favored to win the Georgia district racially gerrymandered to give us Newt Gingrich? The answer is here, in this newly built African-American church. In the past few years, there’s been a huge influx of African Americans, Asian Americans and Latinos into these Atlanta suburbs. So how could Jon Ossoff lose, given the new racial map of this congressional district?

PASTOR LEE JENKINS: And we talked about voter suppression for a lot of minorities.

GREG PALAST: Pastor Lee Jenkins warns the congregation about the threat to their rights.

PASTOR LEE JENKINS: There’s a lot of things going on behind the scenes, where there are tactics to suppress votes.

GREG PALAST: How many again?

NSE UFOT: Eighty-six thousand four hundred nineteen. There are 46,000 of the folks that we’ve registered who have made it, and 40,000 of them are missing. And you know what they told us? “We don’t know what you’re talking about. What forms?”

GREG PALAST: You mean that 40,000 of the voters you had registered, mostly minorities, just disappeared?

NSE UFOT: They did not disappear.

NSE UFOT: With all four of my eyes, I—we walked into county boards of elections—county boards of registrars and seen boxes of voter registration forms waiting to be processed.

GREG PALAST: And if you complain about the missing voter registrations, you could face criminal felony charges, and your group could be destroyed. Three years ago, I visited the group registering 10,000 Korean voters. I met their director, Helen Ho.

HELEN HO: Asian Americans, nationally, are the fastest-growing electorate, and our, you know, political power is growing.

GREG PALAST: This past week, I went by their office. But it was shuttered and empty. It was this one right here. Right. Gone.

Nse told me what happened to them.

NSE UFOT: And so there was a campaign to register them, and they started registering significant numbers of Korean Americans. Their registration forms weren’t getting processed. So they sent a letter to the secretary of state and said, “Hey, here are all these people that we registered to vote. They aren’t on the voter rolls. WTF?” And they never got a response from the secretary of state. And the next thing you know, there were folks from the Georgia Bureau of Investigation coming, seizing their files, requesting correspondence, basically kicking in the door and shutting down their operation.

GREG PALAST: Georgia GOP officials dropped all threat of criminal charges after two years. But by then, the group was put out of business. [Editor’s Note: The Asian American Legal Advocacy Center ran the 10,000 Korean Votes Campaign. The campaign ended in 2015. The organization is now part of the national organization Asian Americans Advancing Justice.]

GREG PALAST: But even if you get your name on the rolls, GOP officials may simply erase your name through a purge called Crosscheck. Georgia has a secret list of an astonishing 660,000 suspected double voters. We got our hands on a copy of this list. According to the Crosscheck list, Maria Isabel Hernandez of Georgia is the same voter as Maria Cristina Hernandez of Virginia. The list of accused voters was created for Georgia by this man, Kris Kobach. Donald Trump just appointed this same Kobach to head Trump’s voter integrity commission.

KRIS KOBACH: The commission is looking at more than just the 2016 election. It’s looking at the entire issue of voting irregularities and fraud and registration problems.

GREG PALAST: So I tracked down the Republicans’ congressional candidate, Karen Handel. She was happy to talk with me about Democrats stealing votes.

Do you think the Democrats are going to steal, try to steal this election by having illegal voters?

KAREN HANDEL: I think that they are pulling out all the stops.

Do you think, are the Republican Party stealing the election by eliminating voters of color from the voter rolls? You were secretary of state. You used a system, Crosscheck, which eliminated a lot of voters. Is the GOP trying to steal it?

KAREN HANDEL: We used—we used the system of Crosscheck to make sure that illegal voters are not on our rolls. And it is—

GREG PALAST: Did you find any?

KAREN HANDEL: Yes, in fact, we did. Go check my—

GREG PALAST: Did you—did you arrest anyone?

KAREN HANDEL: Sir—as a matter of fact, several people were brought before the state elections board.

GREG PALAST: Then it turned weird. Her goons blocked me.

You don’t have to push.

I just want to—one more question. The Republicans have tried to—

GREG PALAST: Are you—are you muscling me? Don’t do that. I don’t think assault should be the new Republican method, assaulting reporters.

Then I tried to ask the Republican about the raids on the voter registration groups. This was the answer.

HANDEL SUPPORTER: Get out of here, liberal!

HANDEL SUPPORTER: Get out of here, liberal!

GREG PALAST: Back at the Eagles Nest Church, the congregation refuses to go back to the way it used to be, with an election decided not by the voters but by Jim Crow. This is Greg Palast for Democracy Now!

AMY GOODMAN: Greg Palast, an investigative journalist, author and director of the documentary The Best Democracy Money Can Buy, joining us right now by Democracy Now! video stream for a brief follow-up. The significance of this election and what you found, Greg?

GREG PALAST: Well, the most dangerous thing is that they are rolling out brand-new Jim Crow tactics designed by Kris Kobach. He’s been put in charge of the election integrity commission, as Donald calls it, to hunt down illegal voters. We know that there are no illegal voters, that it’s almost a nonexistent crime, but they are using methods which actually pull hundreds of thousands of voters off the voter rolls—legal voters. We’re estimating—I started this investigation for Rolling Stone. And it looks like, in Georgia, 50,000 people were removed from the voter rolls, being accused of voting twice, a second time in another state, yet not a single conviction. And it’s mostly voters of color. And you heard that there were 40,000 names that were supposed to be added to the voter rolls, many in the 6th. They have not been added. They won’t be added in time. Ten thousand Korean voter registration forms—that group was based in Georgia’s 6th Congressional District. This is going to be a Jim Crow election. It’s going to be very tough for Ossoff to overcome this type of tactic. And I’m worried that it looks like this is going to be the pattern that the GOP is going to use nationwide.

AMY GOODMAN: And that election will take place on June 20th, next week. Greg Palast, thanks for joining us, investigative journalist, author and director of the documentary and book, The Best Democracy Money Can Buy.

NEXTRep. John Conyers: Why I Am Suing President Trump 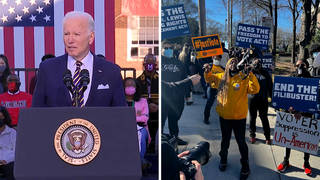