As President Trump goes to Miami today to announce the closing down of the opening of the relationship between Cuba and the United States, that President Obama started, after 50 years, we get response from Rep. Keith Ellison (D-MI), who says Trump is “dragging us back to the failed past, that didn’t work.” Ellison says opposition to Trump’s policies will be the focus of a so- called Resistance Summer announced by the Democratic National Committee.

AMY GOODMAN: We have less than two minutes. President Trump is going to Miami today to announce the closing down of the opening of the relationship between Cuba and the United States, that President Obama started, after 50 years. Your response?

REP. KEITH ELLISON: More of Trump just dragging us back to the past, the failed past, that didn’t work. Obama was right. We tried the separation, the blockade and the—for 50 years. It didn’t work. And so, Obama, quite correctly, charted a new course. You know, and here we go again, him trying to repeal everything Obama stands for. Amy, can I mention something that I’m working on that you haven’t asked me about?

REP. KEITH ELLISON: Well, you know, one of the things that I’m working on now is something called Resistance Summer. It is an intensive engagement of Americans all over the country. It’s part of the Democratic Party’s effort to try to get back in touch with Americans around the core issues that we’re facing—healthcare, accountability in government, increase in wages, protecting Social Security. You know, and I just want to say, on June 3rd, we had 120 sites, all 50 states, and we’re moving in very aggressively to try to make sure that we are converting the Democratic Party into a real party of the grassroots. So, I just wanted to say that. If anybody wants to hear more about it, they can dial 43367 and type in—and text “resist.” And then they could stay in touch with what we’re doing.

AMY GOODMAN: Finally, we covered the People’s Summit in Chicago last weekend. Four thousand people came. Among those who addressed the crowd was Bernie Sanders. Is Bernie Sanders or you or other congressmembers going to introduce a major single-payer bill around healthcare?

REP. KEITH ELLISON: We already did. I mean, we just introduced a Medicaid for all—Medicare for all. And we’re moving forward on that. We believe in that idea. And you’ll remember, John Conyers introduced HR 676 years ago. We believe in single payer. While we’re going to fight to protect and defend the Affordable Care Act, because the Affordable Care Act is an advance on where we were before, our sights are set higher. We aspire to, you know, a system where everybody’s covered and everybody can go to the doctor. And that’s what I believe the United States should have. We should join the rest of the world and cover all of our people.

AMY GOODMAN: Congressman Ellison, I want to thank you for being with us, co-chair of the House Progressive Caucus, first Muslim member of Congress, deputy chair of the Democratic National Committee. 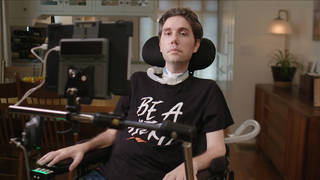