Six members of the Presidential Advisory Council on HIV/AIDS have resigned over President Donald Trump’s handling of the HIV epidemic. In a joint article published in Newsweek, the six advocates say they no longer feel they can effectively do their jobs under a president “who simply does not care.” Trump took down the Office of National AIDS Policy website when he took office, and has not appointed anyone to lead the White House Office of National AIDS Policy. The resignations come as the Trump administration is seeking to repeal the Affordable Care Act, a move which advocates say will especially hurt those affected by HIV/AIDS. We speak to one of the six individuals who resigned, Scott Schoettes. He is the HIV project director at Lambda Legal, a national legal organization serving people living with HIV.

AMY GOODMAN: As we switch gears right now to talk about what’s happening in Washington, D.C., this is Democracy Now!, democracynow.org, The War and Peace Report. I’m Amy Goodman, with Juan González.

JUAN GONZÁLEZ: Well, six members of the Presidential Advisory Council on HIV/AIDS have resigned, saying President Trump doesn’t care about HIV. In a joint letter published in Newsweek, the six members write, quote, “As advocates for people living with HIV, we have dedicated our lives to combating this disease and no longer feel we can do so effectively within the confines of an advisory body to a president who simply does not care,” end of quote. Trump took down the Office of National AIDS Policy website when he took office and has not appointed anyone to lead the White House Office of National AIDS Policy.

AMY GOODMAN: The resignations come as the Trump administration is continuing its efforts to repeal and replace the Affordable Care Act, a move which advocates say will especially hurt those affected by HIV/AIDS.

We’re joined now by one of the members of the Presidential Advisory Council on HIV/AIDS who has just resigned. Scott Schoettes is the HIV project director at Lambda Legal, the oldest and largest national legal organization serving people with HIV.

Scott Schoettes, welcome to Democracy Now! Explain why you took this move, why you resigned.

JUAN GONZÁLEZ: Well, Scott Schoettes, what were some of those concrete signs of why you felt this administration was turning its back on folks with HIV?

SCOTT SCHOETTES: Well, they started, really, during the campaign even. The Trump campaign refused to meet with HIV advocates, when both the Clinton and Sanders campaigns were willing to. They actually scheduled a meeting, and then that meeting was canceled, and they refused to reschedule. So, the signs have been there for a while. Then we came to Inauguration Day, and we saw that the White House Office of National AIDS Policy website was taken down. And to date, it has not been put back up. There was no one appointed to be the director of the White House Office of National AIDS Policy. And that person really serves as the communication link between advocates, between the Presidential Advisory Council on HIV/AIDS, of which I was a part, and the administration. And so, those were some of the signs that this administration was just not willing to engage.

JUAN GONZÁLEZ: And what are some of the specific responsibility of the advisory commission?

SCOTT SCHOETTES: The Presidential Advisory Council on HIV/AIDS is tasked with bringing recommendations around policies related to HIV. And in particular, they’ve been tasked with helping to create and oversee implementation of the national HIV/AIDS strategy. We got our first national HIV/AIDS strategy in this country in 2010. And so, that document guides the work that is being done in this epidemic, which I think it’s important for people to realize this is not a thing of the past. The epidemic is still having a dramatic impact upon various populations across the United States. And so, the work of that—of the people working in HIV is very important, and it’s guided by this strategy. And so, the council helps the administration to guide implementation of that policy.

AMY GOODMAN: Can you talk more about the Office of National AIDS Policy website that the Trump administration took down?

SCOTT SCHOETTES: Sure. I mean, the website is a representation of what that office does. And what’s really important is that office having a seat at the table, so that when the Domestic Policy Council—the former director of the Office of National AIDS Policy had a seat on the White House Domestic Policy Council. And so, what that office is doing is really bringing the issue, and the way that HIV is impacting and still killing people in the United States, to the attention of the administration and creating a conversation that will then inform policy that is made by this administration.

JUAN GONZÁLEZ: I’d like to ask you about your concern about some of the Trump appointees. For instance, in a 2015 interview with former presidential contender Ben Carson, who is now a member of Trump’s Cabinet, he was asked by CNN’s Jake Tapper about his opposition to Planned Parenthood.

DR. BEN CARSON: To take an organization that not only makes money by selling baby parts, but doesn’t seem to understand the sanctity of human life and is willing to destroy that, an organization whose founder believed in eugenics.

DR. BEN CARSON: Yes, and even today, the plurality of their clinics are in minority communities.

DR. BEN CARSON: I thought that they were supposed to be able to get all of those things based on Obamacare. Why do we need Planned Parenthood?

JUAN GONZÁLEZ: That was Ben Carson speaking during the presidential campaign. Of course, he is now the HUD secretary under President Trump. Scott Schoettes?

SCOTT SCHOETTES: Yeah, well, this—as you heard in the clip, what they do is ignore all of the important services that Planned Parenthood provides, besides for the abortion services. And there is no doubt that the defunding of Planned Parenthood and the elimination of those services will have a dramatic impact on our ability to fight this epidemic. They provide a bunch of services around sexual health, around HIV testing, around education on these topics, that is really important to engaging and educating the population that’s most affected. Young people are right now the people most affected by HIV/AIDS in this country. The cohort from 13 to 34 is the place where the new diagnoses are growing the fastest. And so, if we are going to get a handle on this, we need to make sure that we’re providing services to those folks. And another point that I think Mr. Carson misses is that what the Trump administration is now planning on doing is cutting Medicaid, cutting services to low-income people. You can’t do that without dramatically affecting and actually growing this epidemic.

AMY GOODMAN: —can you explain who he is and what it meant for Donald Trump to learn at his knee?

WAYNE BARRETT: Yeah, well, he starts out as—I think he was 23 years old when he was the chief counsel to Joe McCarthy doing all those hearings. He was extremely wired into the Reagan White House. He helped make Donald Trump’s sister Maryanne a federal judge in 1983. He was the ultimate fixer power player in New York for a whole period of time. He died of AIDS in 1986.

AMY GOODMAN: That’s the late great journalist Wayne Barrett, who wrote the unofficial biography of Donald Trump. Roy Cohn’s longtime secretary, Susan Bell, said Trump abandoned Cohn when he found out Cohn was HIV-positive. Bell said, quote, “They were so close, they talked at least several times a week. And as soon as he found out, he took all his cases away from Roy except for one and got new lawyers.” Did you know about this, Scott Schoettes?

SCOTT SCHOETTES: I was unaware of some of the details regarding that, but that’s not surprising to me, given what I have seen from this administration and from President Trump in particular. There just seems to be a complete disregard of this community or the continuing effect that HIV is having on populations across the country. Young gay and bisexual men of color in particular, transgender women, transgender women of color in particular, low-income people—these are the folks that are most affected. And I think it’s pretty clear that this administration has little regard for any of those populations.

AMY GOODMAN: How many people are left on this commission?

SCOTT SCHOETTES: By my count, there are 15 members still remaining on the Presidential Advisory Council on HIV/AIDS. And I know that those folks are—

AMY GOODMAN: And has the Trump administration responded to what you—to the resignation of the six of you?

SCOTT SCHOETTES: I did see a comment that was made yesterday that pointed to an appointee within the White House that’s focused on health. That appointee, unfortunately, is also anti-science. She is not only anti-abortion, she’s actually anti-birth control. And so, if that is the person who is providing counsel to this administration on HIV/AIDS-related policy, I don’t think that that bodes well for how the legislation, the American Health Care Act, is going to be—going to be shaped.

AMY GOODMAN: Scott Schoettes, we want to thank you for being with us, with—the HIV project director at Lambda Legal, oldest, largest national legal organization serving people living with AIDS, one of six people who resigned last week from the Presidential Advisory Council on HIV/AIDS. His article in Newsweek announcing the resignations was headlined “Trump Doesn’t Care About HIV. We’re Outta Here.”

This is Democracy Now! When we come back, what’s happening in Egypt, the number of men who are facing execution this week and other issues. Stay with us. 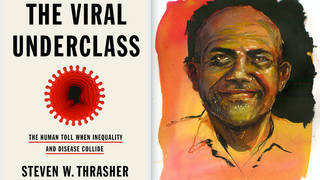