Protesters Take to Streets in NYC, Enraged by Trump’s Decision to Withdraw from Paris Climate Deal

President Donald Trump announced Thursday he will withdraw the United States from the landmark Paris climate accord that was signed by nearly 200 nations in 2015 and heralded as a rare moment of international collaboration to avert imminent climate disaster. Following the news, landmarks in cities around the world were lit up green in support of the agreement. Democracy Now! was there when demonstrators gathered near City Hall to protest.

AMY GOODMAN: President Donald Trump announced Thursday he’ll withdraw the United States from the landmark Paris climate accord that was signed by nearly 200 nations in 2015 and heralded as a rare moment of international collaboration to avert imminent climate disaster. He spoke in the White House Rose Garden, surrounded by supporters.

PRESIDENT DONALD TRUMP: As of today, the United States will cease all implementation of the nonbinding Paris accord and the draconian financial and economic burdens the agreement imposes on our country. This includes ending the implementation of the nationally determined contribution and, very importantly, the Green Climate Fund, which is costing the United States a vast fortune.

AMY GOODMAN: The United States is the world’s second-largest emitter of greenhouse gases. As part of the accord, it had committed to providing financial assistance for pollution controls in developing nations. By pulling out of the agreement, Trump stuck to his campaign promise of putting America first.

PRESIDENT DONALD TRUMP: I was elected to represent the citizens of Pittsburgh, not Paris. It is time to put Youngstown, Ohio; Detroit, Michigan; and Pittsburgh, Pennsylvania; along with many, many other locations within our great country, before Paris, France. It is time to make America great again.

AMY GOODMAN: In fact, the city of Pittsburgh has a climate action plan committing to boosting the use of renewable energy, and Pittsburgh Mayor Bill Peduto, a Democrat, has been an outspoken supporter of the Paris accord. He tweeted after Trump’s announcement, quote, “As the Mayor of Pittsburgh, I can assure you that we will follow the guidelines of the Paris Agreement for our people, our economy & future,” unquote.

The response from world leaders was similarly defiant. France joined Germany and Italy in issuing a joint statement expressing “regret” and rejecting Trump’s claim he would renegotiate the deal. French President Emmanuel Macron also responded with a televised speech that marked the first time a French president has ever given a speech in English from the Élysée Palace.

PRESIDENT EMMANUEL MACRON: We will succeed, because we are fully committed, because, wherever we live, whoever we are, we all share the same responsibility: Make our planet great again.

CHANCELLOR ANGELA MERKEL: [translated] Germany will support the Fiji Islands in preparing the next climate conference, and we will do that together with France. Yesterday, I spoke with the French president, Emmanuel Macron, about the Paris Agreement to the conference in November, which will go further on the path of climate control.

AMY GOODMAN: Now new diplomatic alliances appear to be forming in the wake of Trump’s announcement, with Europe, India and China all pledging to uphold their end of the deal. Chinese premier Li Keqiang joined with European Commission President Jean-Claude Juncker at an EU-China summit in Brussels on Friday in a show of solidarity.

The former president of Ireland, Mary Robinson, said Trump’s decision had turned the United States into “a rogue state.” Former Mexican President Vicente Fox tweeted, the “United States has stopped being the leader of the free world.”

On Twitter, critics noted in 2009 the Trump family, including Donald Trump, took out a full-page ad in The New York Times urging international action on climate change.

Following Trump’s announcement, landmarks in cities around the world were lit up green in support of the Paris climate accord. Here in New York City, demonstrators gathered near City Hall to protest.

PROTESTER 1: When do we want it?

PROTESTER 1: What do we want?

PROTESTER 1: When do we want it?

SHAUN WILLIAMS: My name is Shaun Williams, and I’m here with WE ACT for Environmental Justice. You look at his executive orders that he’s signing and even with this Paris accord and pulling out of that, you see that everything that he wants to do is taking us back into all of the things that we fought against and that we fought to get out of.

CHARLOTTE BINNS: I’m Charlotte Binns. I’m with RENew York City, which is a powerful movement to change the default energy supply to renewable for all of New York City. I think Trump is some kind of diabolical wake-up call, because I’ve never seen so much civic engagement in my life, and I’ve never seen so much local power, local government, stand up on issues that normally they don’t.

PROTESTER 3: What do we want?

PROTESTER 3: When do we want it?

PROTESTER 3: What do we want?

PROTESTER 3: When do we want it?

VALERIE ROSS: If we stay out of that Paris Agreement, what’s going to happen with the planet? There will be no one left. And, of course, the thing that’s complete folly about this—Trump’s not thinking about this, whether it’s Trump, whether it’s McConnell, the rest of them—what they’re not realizing is, they’re going to go down, too. Last time I checked, there is no other planet that’s capable of harboring life of any sort. This is it. This is it. My question is, frankly speaking: Trump, Bannon, are you suicidal? Is that what this is? Because you’re going to go take—you’re going to go, too.

AMY GOODMAN: Some of the voices of protest against President Trump’s announcement Thursday that he is withdrawing the United States out of the landmark Paris climate accord. When we come back, we host a roundtable discussion with climate scientist Michael Mann, climate activist Kumi Naidoo in South Africa, Asad Rehman in London, and oil and energy journalist Antonia Juhasz joining us from California. This is Democracy Now! Back in a moment. 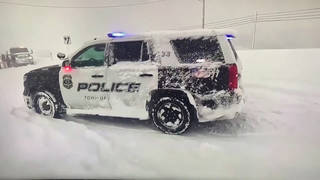