On Monday, the Supreme Court ruled that taxpayer-funded grants for playgrounds could not be denied to a church-run school in Missouri. In an oral dissent issued from the bench, Justice Sonia Sotomayor said, “This case is about nothing less than the relationship between religious institutions and the civil government—that is, between church and state. The Court today profoundly changes that relationship by holding, for the first time, that the Constitution requires the government to provide public funds directly to a church.” For more, we speak with Dahlia Lithwick, senior editor at Slate.com. She is their senior legal correspondent and Supreme Court reporter and the author of the recent piece, “Did the court just seriously wound the separation of church and state?”

AMY GOODMAN: The Supreme Court also ruled on Monday that taxpayer-funded grants for playgrounds could not be denied to a church-run school in Missouri. In an oral dissent issued from the bench, Justice Sonia Sotomayor said, quote, “This case is about nothing less than the relationship between religious institutions and the civil government—that is, between church and state. The Court today profoundly changes that relationship by holding, for the first time, that the Constitution requires the government to provide public funds directly to a church,” unquote.

Meanwhile, the Supreme Court also agreed Monday to hear the case of a Colorado baker who refused to make a wedding cake for a gay couple, citing his religious opposition. The appeal of the baker, Jack Phillips, opens up the door for the court to set precedent on whether businesses can deny people services because of their sexual orientation. David Mullins, who along with his partner Charlie Craig have sued the cake maker, said, quote, “This has always been about more than a cake. Businesses should not be allowed to violate the law and discriminate against us because of who we are and who we love,” unquote.

We’re still joined by Dahlia Lithwick of Slate.com and Vince Warren of the Center for Constitutional Rights.

Dahlia, why don’t you talk about these two cases? Start with the one they ruled on and Sonia Sotomayor’s dissent.

DAHLIA LITHWICK: Amy, this is so important, because I think—it is clear to me, at least—that the next front in civil rights litigation in America is going to be this collision between religious dissenters—we’ll remember from Hobby Lobby and the Little Sisters cases—people who want to sort of end-run basic civil rights statutes based on their predicate belief that my religion prohibits me from being involved. And so we’ve seen a whole raft of cases—florists who don’t want to afford flowers to same-sex marriages, pharmacists who don’t want to deliver birth control. And these—all of these dissenters come into kind of a real profound clash with just basic civil rights statutes. And I think both the cases you’ve cited are an example of how this is going to be the new frontier, going forward. This is Sam Alito and Neil Gorsuch and Clarence Thomas. This is really where their heart is right now.

So, the Trinity Lutheran decision that came down yesterday is such an important, I think, marker for where we are in terms of this so-called wall between church and state. Missouri has a state constitution that provides that we don’t take taxpayer money and give it to churches. We don’t give it to any churches. This goes beyond the federal constitutional law. And it basically says that the state should not be in the business of picking and choosing which churches it wants to subsidize, so no tax dollars at all go to any church. Trinity Lutheran operates a preschool and a school. It is an explicitly religious institution. And it wanted to be considered for a Missouri program that uses recycled tires to create playground materials, so that kids don’t bump their heads when they fall off the swings. They were very, very high in standing in terms of their eligibility for this state program, and the state said, “We can’t give this to you. We cannot give you access to a program that uses taxpayer funds to fund a church.” And in a 7-to-2 decision yesterday, the Supreme Court said it’s OK, they’re eligible, and to discriminate against churches for this sort of program is in violation of their rights. So this really changes, I think, the baseline for what churches will be able to ask us to use with our taxpayer money.

And the reason it’s important, I think, is because only two justices dissented. As you said, Sonia Sotomayor wrote a blistering dissent, saying this is a sea change from what we’ve provided before. And only Justice Ginsburg agreed with her. So, by a 7-to-2 margin now, I think we’re looking at a whole new ballgame in terms of churches being able to say, “We want what everyone else is getting, and to fail to give that to us is a form of discrimination, religious discrimination, in and of itself.”

AMY GOODMAN: So let me—

PRESS SECRETARY SEAN SPICER: The Supreme Court also today handed down its own decision in the Trinity Lutheran case. That was a 7-2 decision, which is a significant victory for religious liberty and an affirmation of First Amendment right of all Americans. The court recognized there’s a clear difference between the government supporting a particular religion and the government simply treating all people the same, fairly, regardless of their religion. This ruling reaffirms that the government cannot discriminate against individuals or organizations simply because they or their members hold religious beliefs. The president believes that America is stronger when people of faith and their organizations can exercise their religion freely, and he’s pleased with today’s ruling.

AMY GOODMAN: So, that was Sean Spicer. For those who watch Democracy Now! on television or online, we didn’t have his image, because this was one of the days that the White House said that the media was not allowed to video the press briefing, so only got the audio. But, Dahlia Lithwick, your response?

DAHLIA LITHWICK: Well, I think it’s really important to see that we have changed the standards in a deep way, and we have really said—and this is so undergirding, as I said, this new revolution at the Supreme Court—we have really said, you know, the real victims of discrimination in America, probably the only ones left, are the churches, and that we’re going to level the playing field so that they can have access to the same programs as anyone else.

I will just say that it’s very clear from the opinion itself—they drop a footnote and say this only applies to rubber resurfacing in church playgrounds. This is not about, you know, whole-hog endorsing, giving churches anything that they want for any purpose. And so it may be of some limited precedential value, going forward. And Justice Breyer joined separately to say, “I want to be real clear: This is just about rubber stuff in playgrounds.” So, there is some argument to be made that the court tried to cabin how far this will spread. But I think, as—again, as a marker of the openness of this court to really allowing for funding of—as Sotomayor says, “If you can fund the rubber stuff in playgrounds, why not the pews? Why not the stained-glass windows?” And I think she’s pointing to a real trend we’ve seen in the last few years at the Supreme Court.

AMY GOODMAN: Could you also comment, Dahlia Lithwick, on the Supreme Court agreeing to hear the case of the Colorado baker who refused to make a wedding cake for a gay couple, citing his religious opposition?

DAHLIA LITHWICK: Yeah, as I said, there have been a whole bunch of similar cases that the court has batted away, people who are saying, “Look, you know, I’m not discriminating against anyone. I have a deeply held religious conviction that precludes me from offering these services.” The baker in question says he’s a “cake artist,” and this actually violates his free expression, to force him to produce a cake that is in tension with his own religious values. And he says, “Look, I don’t, you know, cook with liquor, because that’s against my values. I don’t celebrate Halloween. That’s against my religious values.” So he’s making this core argument that my religious dissent matters here. And as I said, we’ve seen pharmacists make the same arguments and florists make the same arguments.

The problem, Amy, is that states have antidiscrimination laws. Colorado is one of those states. The appeals court in Colorado said, “You can’t get around our antidiscrimination laws by saying that you don’t feel like baking for certain people because of your religion.” And I really do think, when the court decided the Hobby Lobby case, when they kind of cracked open the door for religious dissenters to be able to do an end run around basic civil rights laws, they really opened a Pandora’s box that is going to end up saying we will have such solicitude in this country for religious dissenters that nobody is going to have to serve anyone if they feel that their religious values are being undermined. And as I said, I think this is the new frontier, going forward. This is where we’re going to see a lot of action, particularly with Neil Gorsuch now on the court. 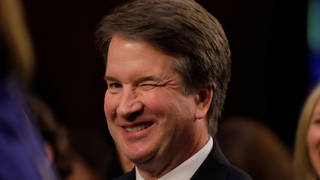