A shocking lawsuit accuses the Washington, D.C., police of using sexual abuse as a form of punishment targeting people arrested during protests against President Donald Trump’s inauguration. A complaint by four plaintiffs charges officers stripped them, grabbed their genitalia and inserted fingers into their anuses while other officers laughed. We speak with Scott Michelman, a senior attorney at the ACLU of the District of Columbia and lecturer at Harvard Law School.

AMY GOODMAN: We turn now to a shocking new lawsuit filed by the American Civil Liberties Union, which charges police in Washington, D.C., used sexual abuse as a form of punishment after hundreds were arrested during protests against Donald Trump’s inauguration, January 20th. A complaint by four plaintiffs charges officers stripped them, grabbed their genitals, inserted fingers into their anuses while other officers laughed. This is plaintiff Shay Horse, a photojournalist, addressing a press conference last week. A warning to our audience: The following clip includes graphic language.

SHAY HORSE: When they began to formally arrest us after sunset, they handcuffed us with zip ties that were so tight, several fingers on both my hands went numb. When I asked an officer to loosen the ties, he replied, “They’re not supposed to be comfortable.”

When we finally got out of the van, we appeared to be at some sort of training facility, with an area that was set up to look like a mock street. A group of officers, maybe a dozen, lined up five male detainees, including myself. An officer told us to drop our pants. An officer went down the row, telling each of us not to flinch as he grabbed our balls and yanked on them and then stuck his finger up each of our anuses and wiggled it around.

I felt like they were using molestation and rape as punishment. They used those tactics to inflict pain and misery on people who are supposed to be innocent until proven guilty. It felt like they were trying to break me and the others, break us so that even if the charges didn’t stick, that night would be our punishment. I was in police custody for about 33 hours. My anus was still sore when I was released.

The effects of what my arrest and detention on January 20th are still with me months later. A couple of fingers on my left hand are still numb. I continue to suffer stress and anxiety. I have trouble sleeping. I wake up every three hours. I’m still trying to come to grips with what happened in the training facility. I feel like I was raped.

AMY GOODMAN: That was photojournalist Shay Horse speaking at an ACLU press conference last week. Democracy Now! invited D.C.'s Metropolitan Police Department to join us on the show, but they declined our offer. In a statement, the D.C. Police Department promised an investigation but defended its officers' actions, saying all arrests on January 20th were proper.

For more, we go to Washington, D.C., where we’re joined by Scott Michelman, senior attorney for the ACLU of the District of Columbia. He’s a lecturer at Harvard Law School.

Scott Michelman, welcome to Democracy Now! Explain what happened and what this lawsuit is all about.

The problem was, in response to those actions, the Metropolitan Police conducted a massive roundup. They pepper-sprayed indiscriminately all the demonstrators in the area. Hundreds of people got pepper-sprayed, without warning or dispersal order, and without individually doing anything wrong. Then the MPD kettled—that is, set up a mass detention for—over 200 people who were not selected because they had engaged in wrongdoing, but because they were on the street where the police had decided to set up the kettle. In effect, they were rounded up and detained for their proximity and perhaps their agreement of the ideas of a handful of people who were engaging in lawbreaking, which is nothing more than guilt by association.

Then, in custody, the detainees were deprived of food, water and access to toilets for many hours. And finally, and perhaps most disturbingly, a number of the detainees, including two of our clients, were subjected to manual rectal probing by an officer putting his finger up their anuses, grabbing on their testicles. And we’ve heard reports that it’s—it was more widespread than the five individuals you heard Shay Horse describe there. But two of those individuals are our plaintiffs, and we think there are more detainees who were punished in that manner.

AMY GOODMAN: I wanted to go to the D.C. police chief. Peter Newsham, who appeared on the radio station WAMU on Friday. Let’s go to a clip.

CHIEF PETER NEWSHAM: Some folks have suggested that the Metropolitan Police Department—it’s a very small group of people—rounded up protesters or demonstrators and indiscriminately arrested them on—

KOJO NNAMDI: Journalists—journalists and legal observers were in the group that was arrested?

AMY GOODMAN: I also wanted to go to another one of your clients, Scott, Baltimore resident Elizabeth Lagesse, who traveled to D.C. to peacefully protest President Trump’s inauguration.

ELIZABETH LAGESSE: I peacefully marched down the street, attempting to catch up with a group of other demonstrators. Although I did not engage in any acts of vandalism, the next thing I knew, police were firing pepper spray and tear gas everywhere. They never warned us or told us to disperse. I’ve seen other protests where police used pepper spray, so I brought a pair of my old chemistry lab safety goggles to protect my eyes. But their irritants burned my face and made me feel like I was choking. I ran away from all the chaos, along with the other protesters. But everywhere we turned, intersections were blocked.

Police eventually chased us into a kind of pen set at the corner of 12th and L, where they held us for hours. They even pepper-sprayed us while we were in the kettle, even though we couldn’t move and weren’t doing anything to provoke them. The chemicals made me cough and made the crowded conditions even more claustrophobic. Many of us asked for food or bathrooms, but the officers refused to provide anything or even answer questions like “Why were we detained?”

Finally, after several hours, they started to formally arrest us, one by one. It seemed like they were moving as slowly as they could, even as it got colder and started to rain. Meanwhile, I had no way to clean the pepper spray from my face. It continued to burn everywhere my goggles didn’t cover.

AMY GOODMAN: That was Elizabeth Lagesse. The ACLU lawsuit also represents Judah Ariel, a D.C. resident who volunteered as a legal observer with the National Lawyers Guild during the inauguration. Ariel says he wore a bright green hat to clearly identify himself as a legal observer, but he still was pepper-sprayed by D.C. police. This is Ariel speaking at the news conference last week.

JUDAH ARIEL: I saw a group of detainees being surrounded by police on the northwest corner of the intersection. A crowd had gathered on the south side, including a number of legal observers with our bright green hats. There were lines of police officers in the intersection facing us, separated from us by yellow police tape and a row of police motorcycles. People were shouting at the officers to release those people being detained across the street. It was tense, but it did not feel noticeably different from other peaceful protests I’ve been at.

After about 10 minutes, all of a sudden, without warning, the police officers in the intersection began dowsing that crowd with pepper spray. The pepper-spraying was completely unprovoked. The police hadn’t given an order to disperse, and I did not see anyone menacing or threatening the officers before they started spraying. I buckled over, coughing and choking.

AMY GOODMAN: That’s legal observer Judah Arial with the National Lawyers Guild. So, Scott Michelman, what are you demanding in your lawsuit, as we wrap up?

SCOTT MICHELMAN: Our lawsuit seeks damages in an amount to be determined by the jury, because we believe that a jury should decide how much of a message needs to be sent to the MPD that they must respect and honor demonstrators’ free speech rights rather than chilling them.

AMY GOODMAN: Scott Michelman, senior attorney for the ACLU of the District of Columbia, lecturer at Harvard Law School, speaking to us from Washington, D.C., thanks so much for joining us.

Brazilian President Michel Temer Charged with Corruption, a Year After He Backed Ouster of Rousseff

NEXTBrazilian President Michel Temer Charged with Corruption, a Year After He Backed Ouster of Rousseff 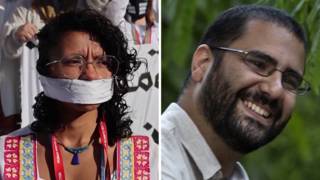