As Republicans attempt to revive a bill to overturn Obamacare, we look at the radical right’s attempt to reshape the role of the federal government—from healthcare to education to housing. We speak with Duke University historian Nancy MacLean, author of the new book, “Democracy in Chains: The Deep History of the Radical Right’s Stealth Plan for America.” MacLean also uncovers the instrumental role the late libertarian economist James Buchanan played in the right’s campaign to eliminate unions, suppress voting and privatize schools.

StoryJun 29, 2017Republicans Have Trifecta Control of 25 States & Need 6 More to Call for a Constitutional Convention

NERMEEN SHAIKH: As Senate Majority Leader Mitch McConnell attempts to revive a bill to overturn Obamacare, we look today at the radical right’s attempt to reshape the role of the federal government—from healthcare to education to housing. While the Congressional Budget Office predicts 22 million would lose health insurance as a result of the Senate bill, some forces in the Republican Party, including the billionaire Koch brothers, say the bill does not go far enough. This comes as the Koch brothers recently announced plans to spend between $300 million and $400 million in the 2018 midterm elections. During a retreat last week, Charles Koch said, quote, “We are more optimistic now about what we can accomplish than we have ever been.”

AMY GOODMAN: Well, as the Koch Brothers gear up for the 2018 elections, we turn now to look at the ideological roots that have reshaped the Republican Party in recent decades. A new book by the historian Nancy MacLean uncovers the instrumental role the late libertarian economist James Buchanan played in the right’s campaign to eliminate unions, suppress voting, privatize schools and curb democratic majority rule. Her book is titled Democracy in Chains: The Deep History of the Radical Right’s Stealth Plan for America. MacLean is a professor of history and public policy at Duke University.

Nancy MacLean, welcome to Democracy Now! It’s great to have you with us.

NANCY MacLEAN: I’m so pleased to be with you.

AMY GOODMAN: Let’s start with today’s headline, the healthcare bill. Deeply unpopular. Let’s just look quickly at the polls, across the board. You have the Quinnipiac poll that says 16 percent of people in this country approve the Republican plan. You’ve got the USA Today poll, only 12 percent. You’ve got NPR/PBS/Marist poll, 17 percent. And yet the Republicans are attempting to revive it and push it through once again. In your book, Democracy in Chains, you lay out the deep history of the radical right’s stealth plan for America. Talk about this as an example of what you have found.

NANCY MacLEAN: Yes. I had never encountered James Buchanan before I started the research that ultimately became this book. But what I learned in the course of that research is that this economist, who was trained at the University of Chicago, who was part of the same milieu as Milton Friedman, Friedrich Hayek and so forth, he went a distinctive way. And he used the economic tools he got at the University of Chicago to look at politics in a new way. And he produced, ultimately, the kind of pernicious cynicism that we see all around us today and that Donald Trump’s candidacy and rhetoric embodies. And in the healthcare debate, what we see is that Buchanan gave the advice to others on the right and to his corporate funders and donors and the people that he talked to that for capitalism of a kind they wanted to thrive, democracy must be enchained. Democracy must be, in effect, shackled, to prevent the majority will from being expressed, because it would take too much from people of great wealth, and that would be a problem for them.

And so we see this being played out in the healthcare debate now, in which, as you quoted in those polls, most people are horrified by this Republican proposal. They don’t want it. They understand that people will die from it. They understand that people who have cancer will be paying astronomical rates for their healthcare if this thing goes through. They understand what a—what a total disaster it is. And yet one of our major political parties has become captive to these donor interests, using the strategy that comes from Buchanan of changing the incentives and the rules, and they are beholden to those donor networks. What I think is fascinating is that our democracy is still working. And so, some Senate Republicans are wavering, because they are actually listening to their constituents and their voters, and they’re getting tons of calls from their constituents and their voters, and they’re defying the Kochs.

AMY GOODMAN: But those were Buchanan’s ideas—

AMY GOODMAN: But talk about his relationship to, well, a key player in all of this, are the Koch brothers.

AMY GOODMAN: They just held a retreat. Talk about specifically what their relationship is, as they say they’re going to pour hundreds of millions of dollars into the elections coming up.

NANCY MacLEAN: Yes, and I should say it’s a very interesting end story, because the Kochs actually pushed James Buchanan aside when he began to raise some questions about the way they were operating at George Mason University. So, he was not as involved in the rollout. It’s really his ideas and his insights that they’re applying, but they did not treat him very well at the end. And so—

AMY GOODMAN: How did they know each other?

NANCY MacLEAN: They came to know each other from Buchanan’s book on campus unrest in 1969, which Koch’s Center for Independent Education reprinted to get to more people. It’s basically the kind of manual that is transforming public higher education right now. So they got to know each other then. Charles Koch joined something called the Mont Pelerin Society, which many of your listeners will be familiar with, in 1970, and actually advertised for all of his functions and his organizations and his, you know, talent pipelines and his recruitment efforts in Mont Pelerin Society materials. So they—

AMY GOODMAN: And Mont Pelerin is?

NANCY MacLEAN: I’m so sorry. Mont Pelerin is an international, invitation-only society by what some people would call free-market fundamentalists, that was launched in 1947 and has spread to the entire world now. It’s invitation-only and includes arch-right economists, corporate officials. Many leading operatives of the Koch-funded network are part of the Mont Pelerin Society now. So it’s a very significant body. And, in fact, it was at Mont Pelerin Society meetings that many of these ideas were discussed and strategies were developed to implement, from what I’ve been able to pick up from the documentary trail.

But Koch and Buchanan began to cooperate particularly in the 1970s, as Koch was launching what became the Charles Koch—I mean, I’m sorry, the Cato Institute—it started as the Charles Koch Foundation—and got to know each other over the years. Buchanan also advised the Chilean dictatorship on a constitution that would enable them to make a transition back to elected government, while keeping the radical, unpopular changes that they had made in place. And so, in the 1980s, in the wake of that Chilean experience, Buchanan also began to advise Charles Koch’s Cato Institute on a strategy for Social Security privatization, which, again, would be starting from the recognition that what they wanted was not popular with any constituency in America. And Buchanan laid it out. He said people, the old, the young, the black, the white, men, women—there was even another category—nobody wants to see Social Security changed in the way that these guys wanted to change it. And so he laid out a step-by-step strategy for how to do that—how to spread misinformation, how to break up existing coalitions, how to pick off existing Social Security recipients so that they wouldn’t be in the fight, because they’d be the most motivated. It’s really quite breathtaking stuff. And it’s the kind of strategic thinking that is now informing the entire Koch apparatus in our country. So, yeah, really, really serious stuff.

And I think, you know, we’ve had such brilliant journalism about the money trail on all of this and the dark money. But to really understand what’s going on, I think we need to understand the ideas that are guiding this and what the endgame is. And I think once people understand those ideas and that endgame and how totally hostile it is to democracy as we have known it over the 20th—you know, since 1900, I think that they will really understand the scale of the threat that we’re faced with.

NERMEEN SHAIKH: Well, Buchanan was from the South.

NERMEEN SHAIKH: Now, can you—unlike other Chicago school economists. So can you explain how that was relevant to the ideas that he came up with, and also the extent to which he transformed—his ideas were able to transform the Republican Party?

NANCY MacLEAN: Yes. To make a long story short, he was born in Tennessee, raised in the South, actually had a fellowship that required him to go back and teach in a Southern public institution after he completed his degree. And he specialized in public finance, which was very important to many governors and state legislatures. But in the South, there was a very draconian approach to public finance, so he fit in well when he came home. He believed that there should never be—you know, that there should be no deficits of any kind, no deficit spending. He had a very parsimonious approach to public spending of all kinds.

And he arrived in Virginia in 1956 just as that state was leading the South in a fight against Brown v. Board of Education. I want to be clear: I have no evidence of Buchanan saying anything about race, directly, in his fight against Brown v. Board of Education. But what he did, using his Chicago economics training, is make a case for arch-privatization of all Virginia public education. And we didn’t even have the verb “privatize” or the noun “privatization” then. But that’s essentially what he advocated. And that was the demand of the most arch segregationists. The leaders of massive resistance wanted that. And in the end, Buchanan’s proposal was too radical. Just like today with the healthcare, Buchanan’s proposal was too radical for even the most right-wing Virginia—for the Virginia Legislature. And so it was defeated.

And it was in the wake of that defeat that he began to develop this new way of thinking about politics, as the state of Virginia finally became open to the majority of its citizens—and I should add there, white as well as black. Virginia practiced voter suppression to an extraordinary degree, such that some said that next to Virginia, Mississippi a hotbed of democracy.

AMY GOODMAN: We’re going to break and then come back to this discussion. Our guest is Nancy MacLean. She’s author of the new book, Democracy in Chains: The Deep History of the Radical Right’s Stealth Plan for America. She’s professor of history and public policy at Duke University in North Carolina. This is Democracy Now! We’ll be back with her in a minute. 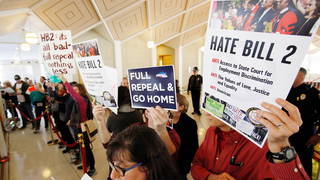