Last week, there was an attempted assassination on the life of Bertha Zúniga Cáceres, the daughter of murdered Honduran indigenous and environmental leader Berta Cáceres. Bertita Zúniga Cáceres was driving back with two colleagues from a community visit in central Honduras when a black pickup truck blocked their path. Three assailants jumped out of the truck and attempted an attack, but Zúniga and her colleagues narrowly escaped. The incident comes just weeks after Zúniga was named the new leader of the indigenous rights group Civic Council of Popular and Indigenous Organizations of Honduras (COPINH). She recently demonstrated in support of pending U.S. legislation to suspend U.S. military aid to Honduras. Her protest was a part of a week of action coordinated by the U.S.-based human rights group Witness for Peace. We speak with Bertita Zúniga Cáceres at her home in La Esperanza, Honduras. Also joining the conversation is Chicago-based Matt Ginsberg-Jaeckle, who has done solidarity work in support of COPINH and translations for COPINH over the last 17 years.

AMY GOODMAN: We turn now to Honduras. On Friday afternoon, there was an attempted assassination on Bertita Zúniga Cáceres. She’s the daughter of the murdered Honduran indigenous environmental leader Berta Cáceres. Bertita has stepped up her political leadership in recent months and continues to call for a full and independent investigation into her mother’s assassination on March 2nd, 2016. She’s carrying on her mother’s fight against the Agua Zarca Dam, a project planned along a river sacred to the indigenous Lenca people.

Well, on Wednesday, Democracy Now! spoke to Bertita Zúniga Cáceres at her home in La Esperanza in Honduras. I asked her about the assassination attempt, this as she just took on her mother’s mantle of head of the organization COPINH. But I asked her to talk about what happened to her last weekend.

BERTHA ZÚNIGA CÁCERES: [translated] So, I’d like to give my greetings to you, Amy, and to everybody. And as you mentioned, on Friday, June 30th, when we were returning from a community where COPINH has continually worked, we suffered an attack on our way back. And we were traveling in a vehicle that belonged to COPINH, and it’s a vehicle that is recognized as belonging to COPINH. And we believe that the attack had to do with a conflict over water and water sources in the region. In that conflict, we also know that USAID has played a role.

So, we didn’t expect the attack. We were traveling back from the community, when a vehicle passed us at high speed and blocked the road in front of us. And men jumped out with machetes and also threw rocks at us, trying to attack us. And then, as we escaped, they pursued us.

AMY GOODMAN: Explain driving and then who the people were who came up behind you, as best as you could ascertain. And then, what happened, what they came out with, what their weapons were?

BERTHA ZÚNIGA CÁCERES: [translated] So I was traveling back from the community with Sotero Chavarría, who’s the coordinator of organization for COPINH, and he was also the driver of our vehicle, as well as Asunción Martínez, who’s the secretary of COPINH, and he was sitting in the back of the car. And the people that attacked us, we don’t know them. There was four of them. Three of the attackers had machetes, and the fourth one was the driver of their vehicle, who was actually the most aggressive.

BERTHA ZÚNIGA CÁCERES: [translated] So, the three men with the machetes, they came out of their car, and they stood in front of where we were coming, to block our vehicle from continuing forward. And they put their machetes in a position of attack to try to attack the car. But the driver, he swerved—you know, our driver, Sotero, he swerved the car to the right, and we were able to go around the men with machetes. But then the driver of their vehicle, when he saw that we were swerving and the attack wasn’t going to be successful, he then threw a rock at the window of our driver, of our vehicle.

AMY GOODMAN: And, Bertita, were you injured in any way?

BERTHA ZÚNIGA CÁCERES: [translated] So, we weren’t injured, and we were also able to, you know, escape with the vehicle intact, as well. But it was a big surprise and a big alert for us, because it could have had very different consequences. In many ways, it was luck that we were able to escape in the way that we were.

AMY GOODMAN: Did you say they tried to—once you got back in your car and they chased you, they tried to push you off the road?

BERTHA ZÚNIGA CÁCERES: [translated] So, yes, the car—then, once we passed the men with the machetes, they got back in their car and then, at high speed, caught up to us. And they put their car right alongside our car. And the road that we were traveling on had a cliff next to it, and so we were forced to the very edge of the cliff. And they put their car as if they were going to, you know, bump us off the cliff. But our driver was able to continue forward and not stop.

AMY GOODMAN: Bertita Zúniga Cáceres, this comes just weeks after you were named the head of COPINH, the organization that your mother, the leading environmental indigenous rights activist Berta Cáceres, headed before she was assassinated. Do you think there’s a link between your heading up COPINH and what happened to you this weekend?

BERTHA ZÚNIGA CÁCERES: [translated] I think that the COPINH assembly process, which we just had, is a process that not only names the new leadership of the organization, but it’s also a process that has reorganized and has strengthened the communities that make up COPINH, as well as our work. And so, obviously, the strengthening of the organization and of the communities is something that the economic and political powers that are—you know, that don’t like our work are obviously concerned about, and so that could very much have to relate to this attack.

AMY GOODMAN: It also comes right after you made a video calling for support for Congressman Hank Johnson’s bill that would cut off all U.S. military aid to Honduras.

BERTHA ZÚNIGA CÁCERES: [translated] In particular, the law mandates a suspension of all military aid that the United States gives to Honduras until the murder case of Berta Cáceres is solved in an effective manner, but not just that case, but other cases that have been representative, like the cases in the Bajo Aguán region, like the cases of Honduran environmentalists who have died defending life in this country.

AMY GOODMAN: Last year, Democracy Now! spoke to Congressman Hank Johnson of Georgia shortly after he introduced the bill to suspend all U.S. military aid to Honduras—the bill, of course, as we were saying, called the Berta Cáceres Human Rights in Honduras Act. Congressman Johnson explained what the pending legislation would do.

REP. HANK JOHNSON: This legislation would suspend financial aid to the republic of Honduras for military operations and training and also weaponry equipment. It would suspend U.S. financial assistance to Honduras for those purposes until such time as the republic of Honduras can demonstrate that it has adequately and transparently investigated and taken action on the many killings, unlawful and extrajudicial killings, of human rights activists, environmental activists, LGBT activists, human rights defenders in Honduras.

AMY GOODMAN: That was Georgia Congressman Hank Johnson, who’s introduced a bill that would end U.S. military aid to Honduras for now. In addition to Bertita Zúniga Cáceres in La Esperanza, Honduras, who just survived an assassination attempt, we’re joined by Matt Ginsberg-Jaeckle in Chicago. He’s a longtime friend of both Bertita and her mother, Berta Cáceres, the murdered Honduran environmental indigenous activist. He’s done solidarity work in support of and translations for COPINH for the last 17 years. He’s a member of La Voz [de] los de Abajo, one of the founding groups of the Honduras Solidarity Network.

Matt, welcome to Democracy Now! Your first response when you heard about the attempted assassination of your friend Bertita, who’s on with us by Democracy Now! video stream from La Esperanza?

MATT GINSBERG-JAECKLE: I mean, it’s extremely worrisome. It was a response of really fear for her well-being, but, unfortunately, it wasn’t a response of surprise. This is predictable. As long as money continues to flow to the Honduran security forces, as long as these conflicts are allowed to rage, and no—and in a complete state of impunity, we can expect these kind of attacks.

AMY GOODMAN: And, Bertita, can you directly address the men with machetes who attempted to kill you last Friday?

BERTHA ZÚNIGA CÁCERES: [translated] So, I would tell them that we are going to continue forward in our struggle. And part of our struggle is to break this cycle of impunity, so that the people who carried out this attack, they should be held responsible for their actions and for what they did.

AMY GOODMAN: Bertita, how old are you, if I might ask?

AMY GOODMAN: What makes you so brave?

BERTHA ZÚNIGA CÁCERES: [translated] So, I was born into a people of great dignity and of great strength. And my mother, Berta Cáceres, instilled upon us, from a very young age, that the struggle is rooted in dignity and that we must continue forward defending the rights of our people.

AMY GOODMAN: That was Bertita Zúniga Cáceres, the daughter of Berta Cáceres, the Honduran indigenous environmentalist assassinated March 2nd, 2016. Bertita herself just survived an assassination attempt. Special thanks to Brigitte Gynther. We were also joined by Matt Ginsberg-Jaeckle, a longtime friend of both Bertita and her mother. And Bertita was speaking to us from her home in La Esperanza, Honduras. She has now replaced her mother as head of COPINH, the indigenous environmental organization. 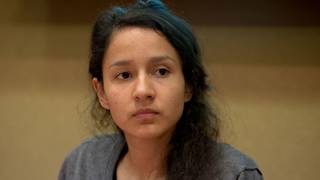