As President Donald Trump meets with world leaders at the G20 in Hamburg, Germany, European activists held a G20 alternative summit—the Global Solidarity Summit. We speak to Croatian philosopher Srećko Horvat about the G20’s policies and the Democracy in Europe Movement, which he started with former Greek finance minister Yanis Varoufakis.

AMY GOODMAN: Can you talk about the agenda of the G20? You’ve been participating in the alternative summit. And what is what you are proposing, and all of the people who have gathered, to challenge the G20?

SREĆKO HORVAT: Yes. To come to that answer, first we have to understand what is actually the current G20. My thesis is that the G20 actually doesn’t exist anymore. I mean, when you look around me and you see the police and you see that all these world leaders are coming to Hamburg, you might, of course, ask me, “How doesn’t it exist, if we can see it with our bare eyes?” But I don’t know if you watched the great TV series which was called Young Pope, where Jude Law is portraying a new conservative young pope who doesn’t even believe in God anymore. I think the current G20 doesn’t even believe that it’s a G20. If there is one thing on which all the leaders of the G20 agree today, it is that they disagree on almost all fronts, when it comes, on the one hand, Angela Merkel is proposing free trade, Donald Trump, as we know, is proposing protectionism. But there is also a big division between the Chinese and the Germans, who are supposed to be the allies. They cannot even agree on the concept of globalization and free trade among themselves. Then there is the Paris Agreement and climate change. Then there is terrorism. Then there is new restrictions on the internet.

But what I think is important to say—and here we come to the message of all of us who are these days protesting, discussing, planning what should our next steps be–is that we shouldn’t only protest against Donald Trump and the new dictators such as Erdoğan, Putin, Saudis and the Chinese. I think the answer to this is not what they call now today the leaders of the free world—Macron, Theresa May or Merkel. It is the same as in the elections in the U.S. Hillary Clinton and Donald Trump were two parts of the same coin. And the same goes for G20. Macron, Merkel and Theresa May, on the one hand; Donald Trump, Erdoğan, Putin, Saudis and the Chinese—are two parts of the same coin. The austerity, the Washington Consensus, which was adopted in ’99 by the G20, and then especially in 2008 with a new kind of Washington Consensus, is actually feeding the neofascism which is rising all around the world, from Poland, which was the country where Donald Trump was welcomed just before G20, to Hungary, to the country where I come from, Croatia, or Serbia and many other countries. I think what we are proposing, from the other side, is that we have to get out of this double blackmail. We have to get out of this illusion and this trap that the answer to Donald Trump is Angela Merkel. Unfortunately, the answer to Donald Trump is not Angela Merkel. We have to fight to create a third space, which can only be a new progressive, radical, international movement.

AMY GOODMAN: I want to go to President Trump speaking yesterday in Poland.

PRESIDENT DONALD TRUMP: The fundamental question of our time is whether the West has the will to survive. Do we have the confidence in our values to defend them at any cost? Do we have enough respect for our citizens to protect our borders? Do we have the desire and the courage to preserve our civilization in the face of those who would subvert and destroy it? We can have the largest economies and the most lethal weapons anywhere on Earth, but if we do not have strong families and strong values, then we will be weak, and we will not survive.

AMY GOODMAN: Srećko Horvat, can you respond to President Trump?

SREĆKO HORVAT: What should I say? When I hear that, it sounds like a déjà vu from his inauguration speech, which was a very apocalyptic speech. But as someone who comes from Europe, as someone who was raised in communist Yugoslavia, where we created a system which wasn’t ideal, but at least we had solidarity, equality, self-management, a different economic system, I must say the Western values Donald Trump is talking about are not Western values at all. He’s erecting borders and walls—with solar panels, by the way, on the Mexican borders. Are these European values? Are the values to bomb Yemen, to make lucrative arm deals with Saudi Arabia? These are, in my opinion as someone who comes from the West, from Europe—by the way, from Eastern Europe, which is not West, but it doesn’t matter—these are, for me, not Western values.

AMY GOODMAN: Yesterday, the Polish president was there with your president, the Croatian president. I was wondering if you can respond to that. But also, talk about the movement that you formed, together with Yanis Varoufakis, who resigned as finance minister in Greece, certainly had his confrontations with Angela Merkel when it came to austerity being imposed on Greece. If you could respond to all of this, Srećko Horvat?

SREĆKO HORVAT: Yes. What we are trying to do with DiEM25, Democracy in Europe Movement, is actually respond to both parts of the same coin. We don’t believe that the answer lies in the rising populism and extreme politics represented by Viktor Orbán or the Polish president or even the Croatian president, who is very happy to just jump around Donald Trump as a small dog. We also don’t believe that the answer lies in the policies which are proposed and implemented mainly by the German government, one of the two countries of the G20, besides South Korea, which has a surplus.

What we are trying to do is actually to unite all progressive Europeans, not only those who are part of the European Union, in a new radical, progressive, international movement. It comes out of the conviction that the concept of the—that it’s finished with the concept of the nation-state, that we cannot retreat to the illusion that something such as national sovereignty still exists in this world. This is also the reason why we are opposed to many leftist comrades who propose the so-called Lexit position—you know, what was happening during Greece, that a Grexit would be a solution; what was happening during Brexit, even from the left by our friends, like Tariq Ali, for instance, but also others, that an exit from the eurozone is a solution. We believe that only by reuniting, by reforming—but not reforming in the reformist sense, but in the sense of something what in political theory we could call a new constituent process—that there is a possibility for a brighter future for Europe. This is the reason why at DiEM25 we are proposing something what we call the European New Deal.

Yeah, as you can see, it’s pretty difficult to talk here about such stuff, since the police is moving all the time. But we don’t want to live in such Europe anymore.

AMY GOODMAN: I wanted to get your response to German Chancellor Angela Merkel, who said at this year’s [G20] summit in Hamburg that she’s focusing on climate change. She was asked Thursday what a compromise on climate change might look like. This is what she said.

CHANCELLOR ANGELA MERKEL: [translated] We know the United States has withdrawn from the Paris Agreement. All others—or, at least as far as I know, many, many others—are still committed to the Paris Agreement. And how that turns out is something we will tell you at the end, when we have finished the communiqué.

AMY GOODMAN: Srećko Horvat, Croatian philosopher, your response to not only what Angela Merkel is saying, but the position President Trump has taken?

AMY GOODMAN: Srećko Horvat, your final words, as you stand there in the streets of Hamburg today? Over 100,000 people have been protesting the G20 summit. A number of protesters and police got hurt. As you speak today, in a message to the world, what you have to say?

SREĆKO HORVAT: Well, my message to all the Americans and to all those who voted for Bernie Sanders, even those who didn’t but who don’t support the Donald Trump policies, my message would be that Donald Trump—that was the first step—rejected to go to the U.K. because he was not welcome there in the U.K., because big protests were planned. Then he went to Poland, because he was welcome there, because his allies in the conservative Polish government organized buses of thousands of people who would come to cheer him and welcome him.

Well, tomorrow, in morning tomorrow—just a second, because the police again is coming. Tomorrow in Hamburg, I hope more than 100,000 people will show that Donald Trump is also not welcome in Europe. And I think it’s a historic day, because it will be one of the biggest public demonstrations against Donald Trump in Europe today. But just with a little footnote: I don’t think that it’s enough to protest Donald Trump. We should also protest the other part of the coin, which is represented by the so-called leaders of the free world. Thanks a lot for being with us in Hamburg today.

AMY GOODMAN: Srećko Horvat, I want to thank you for being with us, Croatian philosopher, one of the founders, along with Yanis Varoufakis, the former finance minister of Greece, of the Democracy in Europe Movement, also known as the DiEM25. We’ll link to your latest piece in The Guardian. It’s headlined “We came to Hamburg to protest about G20—and found a dystopian nightmare.”

This is Democracy Now! When we come back, we’ll talk about the meeting between President Trump and Vladimir Putin, the president of Russia. We’ll be joined by the publisher of The Nation, Katrina vanden Heuvel. Stay with us. 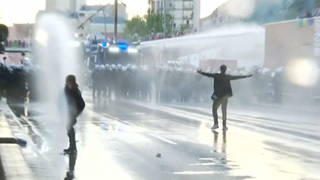