Mass demonstrations have erupted across Hamburg, Germany, as world leaders gather for the G20 summit, where President Donald Trump is meeting with other world leaders. About 100,000 protesters took to the streets and have staged sit-ins in an attempt to disrupt the first day of the summit. Police fired water cannons, pepper spray and stun grenades to disperse protesters. Key issues on the G20 agenda include climate change, trade and North Korea. Protesters who gathered say the G20 has failed to solve many issues, including climate change and global economic disparities. We speak with philosopher Srećko Horvat, who is taking part in the G20 alternative summit, known as the Global Solidarity Summit. He is the co-founder of the Democracy in Europe Movement, also known as DiEM25.

AMY GOODMAN: Mass protests are continuing across Hamburg, Germany, as world leaders gather for the G20 summit, where President Trump is meeting with other world leaders. Earlier today, demonstrators staged sit-ins at key intersections in the city in an attempt to disrupt the first day of the G20 summit. According to the German news agency DPA, first lady Melania Trump was unable to leave her hotel because of the protests. On Thursday, about 100,000 protesters took to the streets, marching with banners reading “Welcome to Hell” and “The World is Not for Sale.” Police used water cannons, tear gas, stun grenades to disperse the protests. According to the police, 29 people were arrested. More than 75 officers and dozens of protesters were injured.

Key issues on the G20 agenda include climate change, trade, North Korea and migration. Protesters say the G20 has failed to solve many issues threatening world peace, including climate change and worsening inequality. This is Steve Price-Thomas of Oxfam.

STEVE PRICE-THOMAS: We live in a world where just eight men have the same wealth as the poorest half of the world population—that’s 3.6 billion people—where one in 10 people live on less than $2 a day, where almost 800 million people go to bed hungry every night. And that situation is completely unacceptable. We’re here at the G20 in Hamburg, and it’s essential that the G20 puts reducing inequality number one on their agenda.

AMY GOODMAN: Earlier today, Brazil, Russia, India and China—the so-called BRICS countries—called on the G20 to push for implementation of the Paris climate deal, despite Trump’s decision to pull the United States out of it. Meanwhile, Trump is meeting today with Russian President Vladimir Putin on the sidelines of the G20.

We go now to the streets of Hamburg, where we’re joined by the Croatian philosopher Srećko Horvat, who took part in the G20 alternative summit: the Global Solidarity Summit. He’s one of the founders, along with Yanis Varoufakis, of the Democracy in Europe Movement, also known as DiEM25. Srecko Horvat’s latest piece for The Guardian is headlined “We came to Hamburg to protest about G20—and found a dystopian nightmare.”

Srećko Horvat, welcome to Democracy Now! Well, tell us why you’ve described this as a “dystopian nightmare” and what you’re calling for in Hamburg.

SREĆKO HORVAT: Hello, Amy. I am really glad to be here, from the streets of Hamburg. And welcome to Hamburg, as well. Well, I’ve been to many protests all around the world, from Occupy Wall Street at Zuccotti Park—you remember that times—to Tahrir Square, Syntagma Square, where we’re with 50,000 people during the OXI referendum. But I’ve never seen such a big amount of heavily armed police, drones, helicopters, water cannon and so on, as I have seen on the streets of Hamburg yesterday, today and probably also tomorrow. This summit costs around 50 million euros, and it’s happening in one of the biggest cities in Germany. What we could have seen in the—during the last days is that this is really turning into something what the German legal philosopher Carl Schmitt would call Ausnahmezustand—namely, state of exception—which means that civil liberties, even peaceful protests, are approached by violent police actions and so on. This is the reason why I call it a dystopia.

AMY GOODMAN: Can you describe what the streets are like and what the police response has been?

SREĆKO HORVAT: Well, you can—just a second, because the police is just there. Well, the streets of Hamburg are mostly completely blocked, empty. Public transport, buses and such stuff doesn’t even drive, only the metro. You can hear helicopters all the time. Now, at this point, when we are here, there are many blockades taking place all around this zone, which is very near to the red zone, which is the very place where the summit is taking place. Yesterday, protesters tried to have a demo, which was called “Welcome to Hell,” but it was blocked by the police. Unfortunately, even peaceful demonstrations are removed from the police. This is not something unusual. We’ve seen that in all corners of the world.

But I think we should give a philosophical point here. When we complain, when the powers—Angela Merkel and others—and the police complain about the violence of the protesters on the streets of Hamburg these days, we should always remember what Bertolt Brecht said: What is robbing a bank in comparison to forming a bank? And the same, I would say, goes now for the G20 in Hamburg. What is the violence on the streets compared to the violence of the G20, of the governments which are part of the G20, of the violence of the Saudis making trade deals with Donald Trump and then bombing Yemen and then bringing ISIS to Manchester and London as a kind of boomerang of all this? What is the violence on the streets of Hamburg these days—a few burned cars—compared to the violence of 1 million and more people displaced from Syria, Iraq, Afghanistan and all the wars which are taking place, still taking place, all around the world? I think we should really deconstruct the notion of violence and what is happening here in Hamburg at the moment. 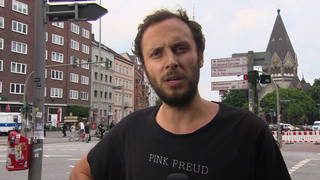