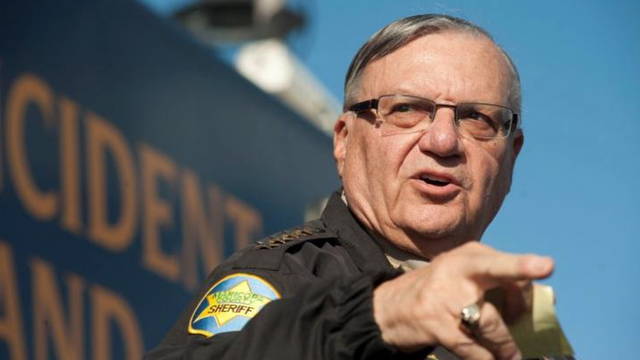 The White House has announced President Trump has pardoned Arizona Sheriff Joe Arpaio, who was recently convicted of contempt of court for defying a court order to stop his deputies from racial profiling.

Arpaio has been a major supporter of Donald Trump. Arpaio’s policies have included racial profiling and detaining immigrants in a scorching outdoor tent city jail, which Arpaio once referred to as his own “concentration camp.”

Cecillia Wang, ACLU Deputy Legal Director: “With his pardon of Arpaio, Trump has chosen lawlessness over justice, division over unity, hurt over healing. Once again, the president has acted in support of illegal, failed immigration enforcement practices that target people of color and have been struck down by the courts. His pardon of Arpaio is a presidential endorsement of racism.”

Carlos Garcia, director of Puente: “In pardoning Arpaio, Trump has lost all legitimacy. After Charlottesville, Trump came to Phoenix to solidify himself as a white supremacist candidate. Convicted Sheriff Arpaio should be tried for much more than contempt of court. His Sheriffs killed Marty Atencio in his jail, kept humans in an outdoor tent city he called his own concentration camp, and he said he was proud to be called KKK. A Sheriff who claims pride in being called KKK is who Trump sees as a 'great American patriot.' Equipping armed vigilantes with ski masks and the conducting worst racial profiling DOJ investigators ever witnessed is what Trump calls, 'just doing his job.' Everyone in this country should be extremely alarmed by Trump’s decision to pardon Arpaio. Tonight Trump sent a clear message that it’s ok to break the law as long as its to further a white supremacist agenda. Our message is that white supremacy will not be pardoned. We will stand in defiance of Trump’s hate and in protection of our communities like we had to for the past twenty plus years under Arpaio. Both the President and the convicted Sheriff will be remembered as stains on this country’s history.”

Derrick Johnson, interim president and CEO of the NAACP: “Joe Arpaio ruled Maricopa County, Arizona with an iron-fist, under the guise of ‘law and order. For decades, Arpaio used fear, cruelty and tyranny to advance his own political ambitions at the deaths and suffering of countless people of color. Put simply, Arpaio is a remorseless criminal who took the law into his own hands and enacted racist policing policies. He betrayed his oaths as a police officer to protect and serve the people of his community. Arpaio should not have been pardoned. On the same night that President Trump has directed the military to implement his ban on transgender people, his decision to pardon Arpaio is yet another insult to marginalized voices across our nation. In the wake of the riot in Charlottesville started by domestic terrorists, neo-Nazis and white supremacists, Trump has once again shown us his true colors and his support for racism and violence. By pardoning Arpaio, Trump has endorsed Arpaio’s abhorrent behavior and has opened the gates for other bigots to follow in his footsteps.”