In a case that highlights what some are calling the “Palestine exception” to free speech on college campuses across the nation, we look at students who are suing Fordham University’s Lincoln Center campus in New York for their right to start a Students for Justice in Palestine group. The student government approved the group unanimously, but the dean of students overruled the approval, saying the group would “stir up controversy” and be “polarizing.” On Wednesday, the students asked a judge to reinstate the student government’s approval. We speak with Ahmad Awad, who has graduated from Fordham University and is the lead petitioner, now a law student at Rutgers University. We also speak with Dima Khalidi, director of Palestine Legal.

NERMEEN SHAIKH: We end today’s show with a case that highlights what some are calling the “Palestine exception” to free speech on college campuses. Here in New York, students at Fordham University’s Lincoln Center campus are fighting in court for their right to start a Students for Justice in Palestine group. The student government approved the group unanimously, but the dean of students overruled the approval, saying the group would, quote, “stir up controversy” and be “polarizing.”

AMY GOODMAN: Well, on Wednesday, the students were in court here in New York asking a judge to reinstate the student government’s unanimous approval. One of the students who is suing to allow the club to be on campus is joining us now. Ahmad Awad has now graduated from Fordham University. He initiated the process to get approval for the group and is the lead petitioner in the case against Fordham. He’s now a law student at Rutgers University. Also joining us, Dima Khalidi, director of Palestine Legal. We asked Fordham University to join us, but they said they’re not providing any statements while the case is in litigation.

AHMAD AWAD: Thanks for having us.

AMY GOODMAN: So, Ahmad, tell us what you did. I mean, what you did does not sound very unusual here, for a club to be on campus.

AHMAD AWAD: It’s not unusual at all. It was the simple part of the college experience. I entered into school. I had an interest in Students for Justice in Palestine from the beginning. I had friends, who are older than me, that were contributing to the cause at other universities. So I thought it would only be right to have a group on campus. So, in the fall of 2015, we began the process of getting approval to have the club status on campus.

AMY GOODMAN: Where, other universities in New York, for example, have this group?

AHMAD AWAD: Oh, yeah, there’s many universities in New York that have this group: Columbia, NYU, Hunter, Rutgers University in New Jersey, Montclair State in New Jersey. The list goes on. There’s over 180 chapters around this country, either under the name SJP or under other names that also work with SJP.

AMY GOODMAN: So you went to the student government.

AHMAD AWAD: I went to the student government, yeah.

AMY GOODMAN: And what did they say?

AHMAD AWAD: We got all the necessary documentation that we needed to fill out. We filled everything out properly. We got the signatures we needed. We filled in all the positions. We started to meet with the administration to explain our mission, our goals. We had our constitution written up. We revised it, according to school policy. And eventually we went up for a vote, after a year of waiting. And the student government unanimously approved our club and granted us club status. But, unfortunately, a month later, we were told that Dean Keith Eldredge would veto the club. He believes that the club was polarizing on college campuses, and it would be unnecessary for Fordham to have a club.

NERMEEN SHAIKH: So, is that the only justification you received from the university administration—

NERMEEN SHAIKH: —about why they overturned the student government’s decision?

AHMAD AWAD: Yeah. It’s mainly to do with the fact that they believe that the group would be polarizing on campus. It may make other students upset or uncomfortable.

AMY GOODMAN: How did they determine this?

AHMAD AWAD: How did—based off of speaking with other professors, reviewing other cases from around the country that are skeptical.

AHMAD AWAD: And a hundred Fordham professors wrote in support of our cause and in support of allowing to SJP on campus. And, in addition, numbers, dozens of Catholic clergy members from churches and universities around this country wrote an open letter to Fordham condemning Dean Eldredge’s decision and telling Fordham that they should revise.

NERMEEN SHAIKH: And, Dima Khalidi, can you talk about whether there’s been any precedent to this at any other university—in other words, a student government approving a group and then the university administration overturning that approval?

DIMA KHALIDI: Well, that’s why this case is so important. This is really the first instance we’ve seen of a university banning a student group like this, especially after getting approval. We have seen SJP and other student groups face a lot of pressure, censorship, even punishment, for protesting for Palestinian human rights. But this is the first time a university has censored to this point, to this level, without any debate even happening, a group like this. So, it’s critical that we challenge this kind of blatant censorship.

AMY GOODMAN: What is Article 78?

DIMA KHALIDI: Article 78 is a procedure, specific to New York law, that allows challenging private institutions when they violate their own rules and regulations. So, it’s a—because private institutions are not bound by the First Amendment, in this case we are challenging the university’s decision based on the fact that it was an arbitrary and capricious decision, it was a bad-faith decision, and violated Fordham’s own guarantees to its students that it would respect their free expression and dissenting views, etc.

NERMEEN SHAIKH: What do you think the broader—can you lay out what is the broader significance of this case? I mean, it extends far beyond Fordham University.

DIMA KHALIDI: That’s right. We are seeing around the country a very broad-based, consistent and concerted effort to undermine the growing movement for Palestinian rights. We saw in your earlier segment what’s happening in Palestine, the kinds of human rights abuses that are happening to children and otherwise. And people are upset about it, with Trump’s Jerusalem decision. And with this growing movement, Israel and its supporters in the U.S. are increasingly trying to shut down this conversation. So this is what’s happening at Fordham. And in order to support our right to dissent in this country, to take these kinds of important positions, we have to ensure that universities don’t get away with this kind of blatant censorship.

AMY GOODMAN: Did other student groups support you, in addition to the student government unanimously voting approval?

AHMAD AWAD: Yes, we did have support from a number of other groups, including the Muslim Students’ Association, who was extremely supportive and helpful in our process moving forward. And students around campus, even just speaking with student friends that I have, other classmates, everyone was interested to see with this has to offer, because there was no other area where people could discuss this conflict on Fordham’s campus.

AMY GOODMAN: Did you expect there to be any controversy?

AHMAD AWAD: I didn’t think there would be controversy at all, mostly because it’s a college campus, and many people go to colleges knowing that they’re going to be able to speak their mind, say what they want, and also be able to learn in the experience.

AMY GOODMAN: So, what happens now, Dima? You, both Center for Constitutional Rights, Palestine Legal, took this to court. You went before a judge yesterday. What happens next?

DIMA KHALIDI: Well, the hearing yesterday was on Fordham’s motion to dismiss and our motion for a preliminary injunction, asking the university to reinstate the student government’s decision. So, the judge at the hearing did not make a ruling, and we are waiting for that ruling. We are hopeful that she—

DIMA KHALIDI: —she really understood the issues at stake. And, you know, we could expect it in the next weeks or even months. But—

AMY GOODMAN: Well, this is quite a lesson in law, now that you’re a law student at Rutgers.

AMY GOODMAN: I want to thank you both for being with us.

AMY GOODMAN: Ahmad Awad, graduate of Fordham University, who started the process to get approval for a Students for Justice in Palestine group at Fordham University, like so many universities and colleges have. And I want to thank Dima Khalidi of Palestine Legal, cooperating counsel with the Center for Constitutional Rights.

That does it for our show. Democracy Now! is accepting applications for our paid year-long news production fellowship. Details at democracynow.org. 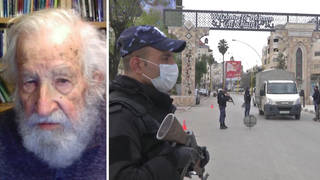