“Her Heart Was Attacked”: Hundreds Gather in Harlem for Funeral of Erica Garner

In Harlem, New York, hundreds of people attended the funeral of anti-police brutality activist Erica Garner, who died at the age of 27 on December 30 after an asthma-induced heart attack, four months after giving birth to her second child. Erica’s father, Eric Garner, was killed when police officers in Staten Island wrestled him to the ground, pinned him down and applied a fatal chokehold in 2014.

StoryJan 03, 2018Erica Garner was “Unbought and Unbossed” in Push for Justice After Her Father Died in NYPD Chokehold

AMY GOODMAN: And in Harlem, hundreds of people attended the funeral of anti-police brutality activist Erica Garner, who died at the age of 27 on December 30th after an asthma-induced heart attack, four months after giving birth to her second child. Erica’s father, Eric Garner, was killed when police officers in Staten Island wrestled him to the ground, applied a fatal chokehold, in 2014.

Inside the church last night, Erica was eulogized by the Reverend Al Sharpton, who talked about Erica’s unflinching determination to get justice for her father. Sharpton said, while they say “she died of a heart attack, no, her heart was attacked that day,” referring to July 27, 2014, the day police killed her father. Sharpton went on to say, “Justice is in a coma in the Eric Garner case.”

The police officer, Daniel Pantaleo, who put Garner in the fatal chokehold, still works in the NYPD. There have also been no federal civil rights charges brought against him and others responsible for Eric Garner’s death. Also attending the funeral, hip-hop artist and actor Common and the father of Michael Brown, killed by a white police officer in Ferguson, Missouri, two weeks after Eric Garner was killed in Staten Island.

There was conflict in the midst of the funeral last night over the exclusion of Erica’s grandmother, Eric Garner’s mother Gwen Carr, causing a number of people to leave, including a group of mothers of children killed by New York police, like Kadiatou Diallo, the mother of Amadou Diallo. A number of New York police officers escorted Erica’s coffin out of the church. After the funeral, several dozen Black Lives Matter activists took to the streets. One person was arrested. Before they marched, I spoke to QB of Shut It Down NYC, a friend of Erica Garner.

QB: Every Tuesday and Thursday, she would do a rally. Whether it was 9 degrees, 10 degrees, whether it was three people, four people, we marched. We marched to her father’s memorial. We said a few words. And that was something that just became a part of our lives. That’s just a unique situation where you have to grow up in front of the world. It’s like the world saw your father get murdered. The world watched your father not get justice. And then you’re pushed into the limelight, and you’re basically living a life that you didn’t ask for. And she didn’t ask to be an activist; it was kind of a choice that was made for her. She was demanding what we were all demanding, which is Pantaleo to be fired, even though he’s still collecting a salary.

AMY GOODMAN: The officer who put her father—

QB: That’s the officer who ultimately killed her—who murdered her father. And he’s still actively working with NYPD. There’s no justice. And there still isn’t justice. And just to have NYPD at her funeral, that’s the last thing in this world that she would have wanted, to have NYPD come in the church, to be involved in the funeral. But one thing I want her to be remembered is how much she loved her children, because nobody’s thinking about that. She just had a 3-month-old. She had an 8-year-old, Alyssa. She loved those two kids. She loved them for the world. And I want people to just remember that, that, you know, she wanted justice, she never got it, and she died never getting it. But the fight is not over. It’s not over.

AMY GOODMAN: We’re standing right near the church where Erica Garner was just memorialized, and police are arresting one of the protesters outside.

POLICE OFFICER: Back up. Back up.

VALERIE ROSS: The man is still being paid who murdered Eric Garner! Please keep that in mind. That man is still on salary with the NYPD. And his daughter is now dead! Show some respect for the dead!

AMY GOODMAN: That’s Valerie Ross, one of scores of protesters who took to the streets after the funeral of Erica Garner. She will be laid to rest today in Linden, New Jersey.

“It’s a Nightmare for Us”: Up to 250,000 Salvadorans Face Deportation After Trump TPS Decision

NEXT“It’s a Nightmare for Us”: Up to 250,000 Salvadorans Face Deportation After Trump TPS Decision 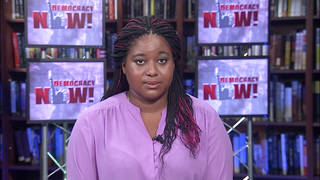