Donald Trump won the 2016 presidential election due to voter suppression. That’s what professor Carol Anderson argues in her new book “One Person, No Vote: How Voter Suppression Is Destroying Our Democracy,” which tracks the rise of restrictive voting laws across the United States. In it, Anderson examines how African-American voter participation has been systematically compromised since a 2013 Supreme Court decision that gutted the 1965 Voting Rights Act. By the 2016 election, turnout among black voters nationwide dropped from 66 percent to under 60 percent. The discrepancy was even larger in key areas like Milwaukee, where turnout went down from 78 percent in 2012 to less than 50 percent in 2016. President Trump won Wisconsin by a margin of fewer than 23,000 votes. We speak with Carol Anderson, chair of the Department of African American Studies at Emory University in Atlanta, about her new book and the upcoming midterm elections.

JUAN GONZÁLEZ: We’re continuing our conversation on voting rights. Still with us is professor Carol Anderson, author of the new book One Person, No Vote: How Voter Suppression Is Destroying Our Democracy. The book looks at how African-American voter participation has been systematically compromised since the 2013 Supreme Court decision that gutted the 1965 Voting Rights Act. In her new book, Anderson tracks the subsequent rise of voter suppression laws across the United States so that by the 2016 election the number of black voters nationwide dropped from 66 percent turnout to under 60 percent. The discrepancy was greater in certain key areas like Milwaukee, where turnout went down from 78 percent in 2012 to less than 50 percent four years later. President Trump won Wisconsin by a margin of fewer than 23,000 votes.

AMY GOODMAN: And Carol Anderson is chair of the African American Studies Department at Emory University in Atlanta, Georgia. Again, her book, One Person, No Vote: How Voter Suppression Is Destroying Our Democracy. So, Professor Anderson, would you say that President Trump won in 2016 because of voter suppression?

CAROL ANDERSON: Absolutely. Absolutely. In White Rage, one of the—in the epilogue of White Rage, one of the things that I looked at was voter suppression in Wisconsin and felony disenfranchisement in Florida, in those two states alone, so that in 2016, there were 60,000 fewer votes cast in 2016 in Wisconsin. Sixty-eight percent of that drop came out of Milwaukee, where 70 percent of the state’s black population lives. And so, in that—and Milwaukee is a Democratic stronghold. So, the change there, because of the voter suppression put in place by Scott Walker and the Republican Legislature, that specifically targeted Milwaukee, that had a massive shift. And so, that narrow margin that Trump won in Wisconsin, that is due to what happened there in Milwaukee. And, in fact, a study showed that 8 percent of whites could not vote because of voter ID laws, but 27 percent of African Americans in Wisconsin could not vote because of voter ID laws. Voter suppression swung the Electoral College in Wisconsin to Trump.

And then, with felony disenfranchisement in Florida, just looking at the numbers there, and the numbers show that 80 percent of those who are disenfranchised are Democrats, and that in terms of voter turnout rate, for those who have regained their full citizenship rights, their voting rights, is that you’re looking at about a 20 percent turnout rate. Just running those numbers alone, it showed that the hundred-plus-thousand margin that Trump won in fact would have flipped to over 200-plus-thousand for Hillary Clinton. Those two states alone—the Electoral College victory in those two states alone would have swung to Hillary Clinton. Trump won by voter suppression.

JUAN GONZÁLEZ: Well, Carol Anderson, I’d like to ask you—in one of the chapters in your book, you detail the various ways that voter suppression has been used in recent years, especially after the Supreme Court Shelby decision, but chapter three, you talk about voter roll purges. And I want to just read the first few sentences there. “The story read like something straight out of Stalinist Russia. But this casualty list was in the United States in the 21st century. Virginia: 41,637 purged. Florida: 182,000 purged. Indiana: 481,235 purged. Georgia: 591,549 purged. Ohio: two million purged.” The issue of how the purging of rolls—now, clearly, many rolls, in many cities especially, need to be purged because people move and they forget to reregister, or they reregister and their old address is still there. But these are astounding numbers in terms of purges across the country in many of these states.

CAROL ANDERSON: Absolutely. Absolutely. And so, the National Voter Registration Act is very clear about how voter roll maintenance is supposed to happen. But what we see are very aggressive secretaries of state who are skipping over many of those steps and going straight to nonvoting as the reason why people are being purged. And so, what we have here, for instance, in Georgia, is that Brian Kemp’s office has said, “We don’t purge people because they haven’t voted regularly. We purge people because they haven’t had regular contact with election officials.” But if you haven’t changed your name, then you’re not going to have a contact with election officials. If you haven’t moved out of one voting precinct, one jurisdiction to another—not moving within, but moving outside of—then you’re not going to have contact. And so, the only reason you haven’t had regular contact then is that you haven’t voted regularly.

Well, what we know from the research is that minorities, poor people and young people don’t vote regularly. And so it becomes a way—by using that characteristic as a way to wipe them off of the voter rolls. From 2016 to 2018, so in the past two years, a Brennan Center report shows that Kemp’s office has removed 10.6 percent of registered voters off of the rolls in Georgia. Over 10 percent have been removed off of the rolls in the past two years. That’s not voter roll maintenance; that is really beginning to cull the electorate.

AMY GOODMAN: You know, it seems like a path to governorship or Senate is to be secretary of state of any state—right?—where you’re going to determine who is going to vote. Now, if you could talk, Carol Anderson, broadly in the country, but using specific examples of, as you talk about—you’re a professor, chair of African American Studies at Emory—what the research shows about the limitations that are put on voters, and who that disproportionately affects, why people of color and poor people are most disproportionately affected, using specific examples?

CAROL ANDERSON: Yes. And so, the best way to talk about this—for instance, voter IDs. Voter IDs sound really innocuous, but they’re based on the lie, the fraud of voter fraud, the lie of voter fraud. Voter fraud is a myth. Justin Levitt, a professor out of California, proved that out of—from 2000 to 2014, there had been 1 billion votes in the United States. Out of those 1 billion, he was able to document 31 cases of voter impersonation fraud. Thirty-one out of 1 billion. So that’s about two a year.

Based on that lie of massive, rampant voter fraud, we get this movement toward voter IDs to protect the integrity of the ballot box. So it’s what Ari Berman talked about. So, you write the laws in terms of the kinds of IDs and what those IDs must have, and so you write those laws, for instance, in North Dakota, so now Native Americans are not going to be able to vote en masse the way they could have, because of a simple tweak in that law of voter ID that is based on a lie.

And then what Alabama did was say, “OK, but, you know, your driver’s license will count.” Then Alabama shut down the Department of Motor Vehicles in the Black Belt counties. And those are counties in Alabama that are overwhelmingly poor and that also have a large number of African Americans. And so, now you had at least about a 50-mile trip in order to get to the nearest Department of Motor Vehicles. Well, Alabama is ranked 48th in the nation in public transportation. So you don’t have public transportation to go the 50 miles to get the driver’s license. But if you don’t have a driver’s license, how do you drive 50 miles? I mean, so—

JUAN GONZÁLEZ: We have about a minute left. I wanted to ask you to also talk about gerrymandering, which many people accept these days as a fact of life. But what is the impact of gerrymandering on voting?

CAROL ANDERSON: Yeah, the gerrymandering, extreme partisan gerrymandering, has diluted the vote. It depresses the vote, because you have noncompetitive races. But what it’s also done is to put 16 to 26 additional Republican seats in the U.S. House of Representatives. And it’s created these kinds of safe, rotten borough districts where politicians were able to choose their voters instead of their voters choosing them.

This is why you see that kind of massive disparity when Congress is moving to cut and gut the Affordable Care Act, but 70 percent of Americans want that act strengthened, they want access to healthcare; where you see the majority, the overwhelming majority of Americans, did not want that tax bill that moved $1.5 trillion to the uber-wealthy, yet you had Congress sailing that bill through. That is because they did not have to be responsive to the will of the voters. That’s what gerrymandering does.

AMY GOODMAN: Carol Anderson, we want to thank you so much for being with us, chair of African American Studies Department at Emory University, author of One Person, No Vote: How Voter Suppression Is Destroying Our Democracy. She’ll be speaking at the Schomburg Center here in New York on October 25th. 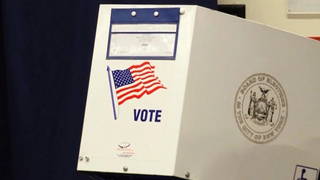