As international outcry grows louder amid new revelations about the shocking death of Saudi journalist and Washington Post columnist Jamal Khashoggi, we speak with investigative journalist Sarah Aziza about Saudi Arabia’s long history of targeting dissidents. Just weeks before the ban was lifted on women driving in Saudi Arabia, the Saudi government arrested several of the country’s most prominent feminist activists, including women who had been campaigning for decades for the right to drive. Sarah Aziza has been reporting from Saudi Arabia with the Pulitzer Center for Crisis Reporting. Her latest piece for The Intercept is headlined “Jamal Khashoggi Wasn’t the First—Saudi Arabia Has Been Going After Dissidents Abroad for Decades.”

StoryAug 10, 2012From Saudis to Soccer, Women Make Strides at Summer Olympics, But Are They Pawns of Backward IOC?

JUAN GONZÁLEZ: We continue our discussion on Jamal Khashoggi as gruesome new details emerge in the disappearance and probable death of the Saudi journalist and Washington Post columnist. He was reportedly still alive when his body was dismembered inside the consulate in Istanbul more than two weeks ago. A Turkish source says it took him seven minutes to die. The New York Times reports four of the 15 Saudi men implicated in the killing are directly linked to Crown Prince Mohammed bin Salman’s security detail.

AMY GOODMAN: For more, we’re joined here in New York by Sarah Aziza, investigative reporter who’s been reporting from Saudi Arabia with the Pulitzer Center for Crisis Reporting, her latest piece for The Intercept headlined “Jamal Khashoggi Wasn’t the First—Saudi Arabia Has Been Going After Dissidents Abroad for Decades.”

It’s great to have you with us, Sarah.

SARAH AZIZA: Thank you for having me.

AMY GOODMAN: We were just speaking with Jamal Elshayyal. If you can add to what he was saying, what you think it’s important for people to understand at this point? Many wondering why President Trump is doing PR work for the Saudi regime, even before they say publicly—he says maybe it’s “rogue elements,” when we’re talking about an official government building in Saudi Arabia—I mean, in Turkey, the Saudi Consulate, Khashoggi disappearing there October 2nd, with his fiancée standing outside for hours waiting for him to come out, and he never did. First, Saudi Arabia said he did walk out, and now it’s been two weeks, and they’ve had to change their story.

SARAH AZIZA: Yeah, absolutely. Well, I think, in many ways, while this story is incredibly shocking in its details, it’s really just a difference in degree rather than kind, as far as what we’ve seen Saudi Arabia capable of doing over the years, and particularly under this crown prince. So, as the reporter pointed out, many activists and journalists have found themselves silenced in one way or another or placed under pressure even while abroad. And the latest developments with Khashoggi’s case have only further reinforced the feeling that many activists and writers and students and any everyday Saudi who may be abroad feels. They’re never quite beyond the reach of the Saudi government. And as your previous guest just mentioned, Jamal was not even a dissident. He was very clear on that while he was alive. He was a reformer. For a long time, he was a loyalist. And it was only in very recent—

AMY GOODMAN: And got criticized by many dissidents.

SARAH AZIZA: Yeah. Yeah, exactly, for not going far enough. He wanted to even believe that Mohammed bin Salman could deliver on some of his promises early on, but it was only when he saw the crown prince taking actions that directly contradicted all the promises of reform and liberalization that he felt the need to step out. So, yeah, we’ve seen all of this before, in a sense.

I’ve spoken to many Saudis who have spent years abroad, who, maybe like Jamal Khashoggi, put themselves in self-imposed exile because they felt it was no longer safe for them to be speaking out or writing freely within the kingdom. But then, as some of Jamal Khashoggi’s own family experienced, some of their family might have been placed under house arrest, under travel bans, threatened or harassed by the government. So, none of this—in many ways, this is not a departure for Saudi Arabia.

And in the same way—you mentioned Trump’s response—unfortunately, we’ve seen him very, very willing to be flexible on the truth, to change his story, to really not honestly be apparently looking for the truth, but looking for a story that fits as a justification for what he wants to do.

JUAN GONZÁLEZ: Well, there’s been a lot of attention, obviously, in the world press to the right of women to be able to drive in Saudi Arabia under the Crown Prince bin Salman. But what is the actual situation for dissident women in Saudi Arabia today?

SARAH AZIZA: Thank you for asking about that. That’s something I think that we—those of us who were following this story this summer were really confounded at the world’s lack of response when Mohammed bin Salman made a lot of pomp and circumstance about finally giving women the right to drive. Up until this past year, women in Saudi Arabia were the only women on the planet who didn’t have that right.

So it was very symbolic, and it was a meaningful change for many women, but the world was willing to ignore the fact that at the same time Mohammed bin Salman was jailing the very women who had worked for years or decades calling for the right to drive, among other human rights and rights for women.

Loujain Al-Hathloul, Aziza al-Yousef, among many others, Hatoon al-Fassi, some of the most prominent women activists—some of them had been working since the ’70s for equality—were jailed without any real public charges, or, in the case of Loujain Al-Hathloul, government-propagated rumors that they were foreign agents, agents of Qatar. And—

SARAH AZIZA: Absolutely. Yeah, let’s talk about Loujain for a second. So, Loujain was a prominent women’s rights activist, and she was in Riyadh when this announcement came from Mohammed bin—or, from King Salman, but as part of Mohammed bin Salman’s grand agenda. She was in Riyadh only because she had been abducted from the UAE a few months before. She was studying for her master’s in the UAE and was arrested, forced to return to Saudi Arabia, placed under a travel ban, not allowed to leave the country again, and then, a few months later, was arrested.

But before that, when she was sitting at home watching the announcement come down about women driving, she knew about that from a few days prior, when the Royal Court called her personally and told her to remain silent, to not speak publicly, even in praise of the new lifting of the ban, as a way of controlling the narrative that tightly. That’s one of the many instances where we saw how MBS, the crown prince, is so really obsessed with controlling the narrative from the right and the left.

AMY GOODMAN: Even in praise.

AMY GOODMAN: So, what happened, ultimately, very quickly? She tweeted—

AMY GOODMAN: That one word, “Hamduililah.”

SARAH AZIZA:* Yeah, “Thank God” for, you know, the right to drive, and very quickly was sent a message from someone from the Royal Court saying, “We told you not to speak, and if you know what’s good for you, basically, you’ll shut up.”

JUAN GONZÁLEZ: And the charges against her?

SARAH AZIZA:* Basically, undermining the state. She has a connection with minority groups and activists in the kingdom. And the Saudi government, especially under MBS, has been expanding its definition of terrorism. It’s cracked down on cybersecurity laws, using the phrase “fake news.” Spreading fake news or defamation against the royal family is incurring higher and higher penalties, including imprisonment and fines. So, it really doesn’t take anything substantial to be jailed or silenced by or imprisoned by the government. Hundreds have been jailed under MBS, including in the last year, 15 journalists just in the kingdom alone.

So, this is, again, something that MBS has been showing us—his intent and his willingness to trample on human rights and to be completely intolerant of free speech among his own citizens. So, while the case of Jamal is grisly and bizarre and shocking, it’s, again, not a departure from what we’ve seen from MBS and from prior Saudi rulers.

AMY GOODMAN: Of course, not to mention what’s happening in Yemen every single day—

AMY GOODMAN: —the worst humanitarian crisis in the world, backed by the United States, the Saudi-UAE coalition’s constant bombing of this country.

SARAH AZIZA:* Yeah, yeah. And I might add, I’ve spoken to—I have many contacts within Saudi Arabia and among the Saudi diaspora who are probably the least shocked of anyone who is following this story. You know, the world has sort of turned aghast at what’s gone on in Istanbul, but in the case of many Saudis, Saudi dissidents or just Saudis who are aware of their government’s ongoings in the world, they are perhaps the least surprised by this, although it is incredibly sobering and chilling and just a confirmation of their greatest fears. Same with the U.S. response—we don’t hold out a lot of hope for substantial change.

AMY GOODMAN: Sarah Aziza, we want to thank you for being with us.

AMY GOODMAN: And we’ll link to your piece at The Intercept.

This is Democracy Now! In 20 seconds, we’ll be going to Washington to a BuzzFeed exposé on an assassination team in Yemen made up of U.S. special forces, a U.S. mercenary firm. Stay with us. 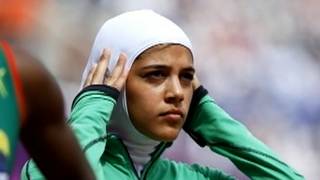 From Saudis to Soccer, Women Make Strides at Summer Olympics, But Are They Pawns of Backward IOC?