As questions swirl around Brett Kavanaugh’s eligibility to join the Supreme Court, some are asking if President Donald Trump should have had the power to nominate him in the first place. We speak with Dr. Bandy Lee, forensic psychiatrist on the faculty of Yale School of Medicine, about Trump’s mental state and the possibility of removing him from office using the 25th Amendment. Dr. Lee is an internationally recognized expert on violence. She is the editor of the best-selling book, “The Dangerous Case of Donald Trump: 27 Psychiatrists and Mental Health Experts Assess a President.”

AMY GOODMAN: Because you have now, in this well-known book—

AMY GOODMAN: —and in a movement that’s gathering more and more steam, you have questioned Donald Trump’s—you’ve questioned his capacity to govern. And you have talked about invoking the 25th Amendment. That’s interesting because recently there was an op-ed piece in The New York Times by an unknown person, an official within the Trump administration, who apparently was talking about the same thing. Explain the 25th Amendment and why you’ve weighed in on that and, moving now from Kavanaugh to Trump, why you have this evaluation of Donald Trump. And I’d like you to put it in the context—for example, last night in Mississippi, he attacks the woman who accused Brett Kavanaugh of attempting to rape her when she was 15 and he 17. Donald Trump originally, when he heard her testimony, said she was very credible. Last night in Mississippi, he mocked her.

DR. BANDY LEE: Yes. First of all, the 25th Amendment is a political decision, and it’s a political action, so I don’t purport to comment on that in any way. What I do as a mental health expert is to call attention to situations where restriction, removal from access to weapons or restriction on the powers of the presidency are called for, be that removal—it seems that from political experts’ standpoint, that is the means, that’s the only means we have available. And from the op-ed piece in The New York Times, it seems that containment itself is not working, and therefore, it does seem correct that something like the 25th Amendment would need to be invoked. The Section 4 of the 25th Amendment deals with presidential inability, inability to perform their duties.

As for the president’s mocking at the rally—

AMY GOODMAN: Following his talking about her as a very credible witness.

AMY GOODMAN: She hadn’t said anything publicly in between the two times that he said that and then openly ridiculed her.

DR. BANDY LEE: I think that’s when mental health professionals can be helpful with their input, because they can—they’re used to dealing with many disorders. They’re used to dealing with personalities that may deceive and manipulate the public, and therefore it’s important to note that not everything one says is true. And when the president was expressing sympathy or endorsed the—

AMY GOODMAN: Praise for the woman.

DR. BANDY LEE: —credibility of the woman, you can see it. There’s a superficiality to it. Even at—I think at the U.N. press conference, he spoke about how difficult it is for her or her family to come forward, so he understands it may take many years. You can see how his speech is rather formulaic and without the emotional intensity he shows in other instances. And he senses very keenly what the public wants to hear and what the public might respond to. That’s often very strong in individuals who are deceptive or manipulative.

AMY GOODMAN: So, this movement began, that you’ve been involved with, oh, a year and a half ago. First tell how many people were at your original Yale conference and then the response to it afterwards.

DR. BANDY LEE: At the original conference, I had four speakers, some of the most renowned figures in psychiatry.

AMY GOODMAN: And how many people were in the audience?

DR. BANDY LEE: And there were only about two dozen people in the audience, which was surprising. It was the prime auditorium space at Yale School of Medicine.

DR. BANDY LEE: And then, we later we realized that more than a hundred people had tuned in. And soon after, when we got national attention, hundreds and hundreds, now thousands, of mental health professionals got in touch with me, agreeing with us and stating their own concerns. What we discovered was that there was pretty much a near consensus in the mental health field, even among my colleagues when I spoke about the issue.

AMY GOODMAN: I’d like to ask about one other thing before we end. You have, on the one hand, your analysis of President Trump from afar, but then the effect of what’s happening in Congress, hearing Dr. Blasey Ford share her story, which she hadn’t shared with the public ever, only a few times with personal—with her family, the effect this is having on women and victims in general around this country, women coming forward, telling their stories, in many cases for the first time, like Maria Gallagher speaking to Senator Flake. She had never publicly said that story. She didn’t even know she was speaking publicly, but there was a camera there.

DR. BANDY LEE: Yes. So, this is precisely why this is a public health issue. We are not as concerned about the personal mental health of the president or diagnosing the president. We’re not interested in armchair psychiatry. In fact, we’re expressly trying to avoid all of this by calling for a valid evaluation, because any other situation of this magnitude, of this influence, there would be an intervention and an urgent evaluation. So, the dangerousness and trauma and psychological effects, as well as policies and national and international effects that come out of the psychological dangerousness of this presidency, are all there to see. And we have the data. So what we do as mental health professionals is to call attention to the urgency and the dangers. And we very well know that the dangers will not go away, but only increase. And what we cannot do is act at a national level.

AMY GOODMAN: You’ve written to Congress and the FBI. Have they responded?

DR. BANDY LEE: Not yet. But what politicians, the political bodies can do is act nationally. But what they cannot do is recognize the signs and symptoms of a mental health problem, and therefore there needs to be a dialogue. We usually wait to be called as an expert consultant to educate and to issue recommendations. But since we have not been called, we are warning, alerting, as you have said, but actually trying to educate the public of the need for intervention, based on our special knowledge.

AMY GOODMAN: Dr. Bandy Lee, I want to thank you for being with us, forensic psychiatrist in the faculty of Yale School of Medicine, internationally recognized expert on violence, editor of the best-selling book The Dangerous Case of Donald Trump: 27 Psychiatrists and Mental Health Experts Assess a President.

When we come back, Brett Kavanaugh objects to being held accountable for his behavior in high school. We’ll look at the criminalization of black and brown students that’s led to what is known as the school-to-prison pipeline. Stay with us.

Lift Us Up: Meet the Activists on the Front Lines of the Battle for Educational Justice in America

NEXTLift Us Up: Meet the Activists on the Front Lines of the Battle for Educational Justice in America 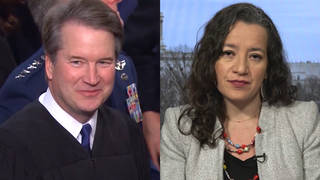