How America’s Perpetual Warfare Abroad Is Fueling an Increase in White Supremacist Violence in U.S.

America’s perpetual warfare abroad has led to an increase in white supremacist violence at home. That’s one of the key findings in Frontline PBS and ProPublica reporter A.C. Thompson’s new investigation, “Documenting Hate: New American Nazis,” which premieres Tuesday evening on PBS. The documentary reveals the deep ties between the military and white supremacy, as Thompson examines the Pittsburgh shooting and the rise of violent hate groups such as Atomwaffen. Thompson interviews historian Kathleen Belew, who says there has always been a correlation in the U.S. between the aftermath of war and the rise of white supremacist violence. “If you look, for instance, at the surges in Ku Klux Klan membership, they align more consistently with the return of veterans from combat and the aftermath of war than they do with anti-immigration, populism, economic hardship or any of the other factors that historians have typically used to explain them,” she notes. We speak with A.C. Thompson in Boston. His investigation premieres Tuesday on PBS stations and online.

JUAN GONZÁLEZ: We’re continuing to look at the rise of neo-Nazis in America in the wake of the Pittsburgh synagogue massacre and a spate of hate-fueled killings in the U.S. in recent weeks. Still with us is A.C. Thompson, correspondent for Frontline PBS and a reporter for ProPublica. His investigation Documenting Hate: New American Nazis premieres tonight on PBS stations and online at pbs.org/frontline.

In his investigation, Thompson spoke with professor Kathleen Belew, author of Bring the War Home: The White Power Movement in Paramilitary America, on links between the military and Atomwaffen.

A.C. THOMPSON: We’re looking at a current group called the Atomwaffen Division, and they are actively recruiting military members. Does that surprise you?

KATHLEEN BELEW: Not at all. That’s a strategy pioneered by the white power movement in the period of my study and continued throughout the post-Vietnam period. One thing to understand is that throughout American history there’s always a correlation between the aftermath of warfare and this kind of vigilante and revolutionary white power violence. So if you look, for instance, at the surges in Ku Klux Klan membership, they align more consistently with the return of veterans from combat and the aftermath of war than they do with anti-immigration, populism, economic hardship or any of the other factors that historians have typically used to explain them. Nationalist fervor, populist movements—those are all worse predictors than the aftermath of war.

KATHLEEN BELEW: It’s important to remember, too, that returning veterans that join this movement, and active-duty troops, we’re talking about a tiny, not even statistically significant, percentage of veterans. But within this movement, those people who did serve are playing an enormously important role in instruction of weapons, in creating paramilitary activist mentality and training.

A.C. THOMPSON: When we speak to people involved in this movement today, they talk about leaderless resistance. Can you explain that to me?

KATHLEEN BELEW: Sure. Leaderless resistance is basically what we would understand today as cell-style terrorism—the idea that you can recruit a small number of committed activists, organize them, and then they will behave on their own in a cell without direct ties with movement leadership.

If we think, for instance, about the Oklahoma city bombing, Timothy McVeigh is sort of the ideal soldier of leaderless resistance. He is in infantry unit and serves in the Gulf and is involved in white power groups while he’s on post. He’s consistently involved in this movement, right up to the moment of the Oklahoma City bombing.

We know that this is part of the white power movement and an act of leaderless resistance, but we have this memory of that as an act of one person. And as a result, I think we’ve never really delivered a decisive stop to this activism.

A.C. THOMPSON: That because we don’t understand Oklahoma City as being an outgrowth of an organized movement, that it has been around for decades, that is modeling the military, that is involving military members, that the authorities have never really been able to put a stop to it?

JUAN GONZÁLEZ: That was professor Kathleen Belew speaking with A.C. Thompson. A.C., why is it then that the military and the federal government, in its counterterrorism efforts, places so little attention, of the billions of dollars that they spend on counterterrorism, dealing with home-grown, right-wing extremist terrorism?

A.C. THOMPSON: You know, that’s a great question, and I don’t think anybody really knows the full answer to that. I think one thing that we should say is that there has been more aggressive action from the FBI and the Department of Justice recently on this front. So we saw eight white supremacists involved in the Rise Above Movement, who were active in Charlottesville and at other protests, recently get arrested on rioting charges. We see the FBI looking at this connection between Atomwaffen and the Pittsburgh massacre.

But I think, in general, there has been this massive turn towards focusing on 9/11-style terrorism and the sort of like sense that the white supremacist, anti-government terrorism embodied by people like Tim McVeigh, embodied by people like Wade Page, who was a neo-Nazi who went into a Sikh temple in Wisconsin and killed six worshipers, that that is not that important.

And I think that there’s been a sort of loss of the expertise on white supremacist terrorism within the federal government, that everything now is jihadi-style terrorism, and that’s what people focus on, and so people don’t remember, don’t have the institutional knowledge to go after the white supremacists.

AMY GOODMAN: A.C. Thompson, for this report, you interviewed a member of Atomwaffen, well, named—you call him John. You disguise his voice. His face is blurred. This is a clip.

A.C. THOMPSON: Back in New York, our Atomwaffen source, John, agreed to talk over video chat with me and my colleague Ali Winston.

A.C. THOMPSON: When you say lone-wolf attacks, it sounds to me like you’re talking about basically terrorist acts?

JOHN: Yeah. They don’t see themselves as terrorists; rather, they see the United States as the ultimate terrorist. Like what Adolf Hitler said, “How do you meet terrorism? You meet it with stronger terrorism.” Atomwaffen is made up of about 60 guys, and then you have what is called initiates, that guys were in the process of becoming members. And in order to become a member, you have to prove yourself.

A.C. THOMPSON: So, how many initiates would you say that there are?

ALI WINSTON: Or were?

JOHN: Oh, when I left, there was more initiates than there were members, if that tells you anything.

JOHN: All it takes is one guy to just snap and to do something like this. That’s what Dylann Roof said: “I’m tired of seeing nothing done in the white nationalist community, so I’m going to take a stand, and I’m going to go into a church, and I’m going to kill all these black people, because no one else is doing anything.” Who knows? There could be another Dylann Roof in Atomwaffen.

AMY GOODMAN: Dylann Roof, of course, is the young man who opened fire in the AME church, the Emanuel Church in Charleston, gunning down African-American worshipers, as well as their minister. A.C. Thompson, you disguise John’s face, his voice. I mean, this journey you go on, confronting white supremacists or those who want to talk about them, is dangerous for yourself, as well. But if you can tell us who John is, how you found him, and then, when you find James Mason, him talking about Trump emboldening these people?

A.C. THOMPSON: Yeah, I mean, what I should say about John is the reason that John’s voice is disguised, his identity is disguised, and same with the other former Atomwaffen member that we interview in the film, is they’re not scared of the authorities. They’re not scared of the public. They’re scared of other current Atomwaffen members coming after them or their families and killing them. That’s why they’re disguised. And that’s the sort of fear that people have about talking about these groups when they’ve been inside these terror organizations.

We went out to Texas because Atomwaffen is currently sort of driven from a cell of people in Texas, Houston, Texas. There’s a young man named John Cameron Denton. He goes by the online handle “Rape.” Everyone in the group calls him “Rape.” And we confronted him out at a black metal, heavy metal festival in Houston and said, basically, like, “Hey, you know, you’re talking about killing people all the time. You’re making threats to people online. You’re celebrating mass murder. We’d love to interview you about your views.”

He didn’t want to talk, but we did eventually get the guy, James Mason, who’s sort of been the inspiration for this group, who’s an adviser to the group, to talk to us. And what he said was pretty fascinating.

JUAN GONZÁLEZ: What did he say?

A.C. THOMPSON: So, you know, we expected that he would say, “Overthrow the government, smash the state, impose fascism.” And he did celebrate Tim McVeigh. He celebrated James Alex Fields, the man accused of killing Heather Heyer. He did say, “I welcome the chaos.” But the thing that he said that surprised us is he said, “But, you know, I’m sort of reconsidering these days. We have Trump in office now, and I really see Trump as an ally, so I don’t really know where things are going to go from here, and I’m sort of rethinking my philosophy a little bit.” And that surprised us. That was a little bit of a shock to us.

AMY GOODMAN: A.C., very quickly, you have the Thousand Oaks killing of 12 people; that man served in the military. Parkland, he was in JROTC. The yoga studio killing in Tallahassee, he was in the military. In the last 10 seconds we have, how do you think this can be dealt with?

A.C. THOMPSON: Yeah, you know, I think one key thing is that we need military authorities to really keep an eye on the types of people coming into the service and the things that they are doing in the service, and we need sort of general thoughtfulness and vigilance on this.

AMY GOODMAN: I want to thank you so much for being with us. Again, A.C. Thompson, correspondent for Frontline PBS, reporter for ProPublica. His investigation Documenting Hate: New American Nazis premieres tonight, Tuesday night, on PBS stations, online at pbs.org/frontline. 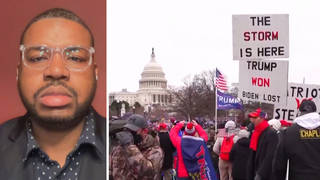