Rep. Pramila Jayapal talks about the scandal embroiling the White House over former Staff Secretary Rob Porter, who resigned after evidence surfaced that he had abused his two ex-wives. On Tuesday, FBI Director Christopher Wray testified to the Senate that the FBI had told the White House about the physical and verbal abuse allegations that were holding up Porter’s background check months earlier than the White House has admitted. Jayapal talks about why she has called for White House Chief of Staff John Kelly to resign, as well as her support for impeachment proceedings against Trump.

AMY GOODMAN: Finally, it’s day eight of the Porter scandal, of the staff secretary, a very high role in the White House, very close to Trump, with CNN reporting he was going to be elevated to deputy chief of staff. Well, this was all until—not information came to the White House about him beating up his two wives, one we now have a picture, but only because a picture came out showing the black eye of one of his wives. So, you have this question of what the White House knew, when they knew it, including President Trump himself, not to mention General Kelly, his chief of staff, and his speechwriter quitting over—

AMY GOODMAN: —Sorensen, over allegations that he ran over his wife—ran over her foot. And you have the women themselves who have accused President Trump of sexually harassing or assaulting them, saying they want Congress to investigate the president himself. Your thoughts?

REP. PRAMILA JAYAPAL: Well, I’ve called for General Kelly to step down. I think it is outrageous that a chief of staff would allow an alleged abuser, with hard evidence, not from just random sources, but from the FBI, to actually stay, that he would propose that he be promoted, that he would be given the highest, essentially, access to classified information without permanent security clearance.

You know, #MeToo—Amy, you know this better than anybody—#MeToo was not just about the women who were abused or the men that abused them. It was also about the cover-up of all those involved, the men and the institutions that covered it up and refused to believe the women that stepped forward. That is exactly what John Kelly has done.

It’s not unexpected from Trump, who has these accusations of sexual assault against him. We recently found out that he paid off one woman through—well, now they’re saying it’s not through his campaign funds. But this is a man who has consistently shown disrespect for women. He supported a pedophile in Alabama. And he continues to show tremendous disrespect.

John Kelly, in this particular case, allowed this to happen. We have sent a letter to Kelly. My colleagues Ted Lieu and Brenda Lawrence and Jamie Raskin and I sent a letter to John Kelly saying, “What did you know when? And why did you keep Rob Porter? Why did you encourage him to stay? And why have you allowed this kind of disrespect to women to continue?” I think John Kelly needs to go.

AMY GOODMAN: And the president? Do you think he should be impeached?

REP. PRAMILA JAYAPAL: I think—Well, you know, I signed the impeachment articles that Steve Cohen, my colleague Steve Cohen from Tennessee, drafted. I have voted twice on the floor to begin the discussion on impeachment, because I really believe that this president continues to be in violation of the Constitution. He now has new properties, by the way, that he’s trying to hide through LLCs, even as he said, oh, he’s not going to be involved in business anymore. This president is making enormous money on the backs of Americans across the country. He’s using the Oval Office for that. He’s bringing tremendous disrespect. He equates white supremacists with those who are fighting white supremacy. I think he needs to go.

AMY GOODMAN: Pramila Jayapal, I want to thank you for being with us, Democratic congressmember from Washington state, vice ranking member of the House Budget Committee and vice chair of the Congressional Progressive Caucus, speaking to us from Congress.

This is Democracy Now! When we come back, it’s 20 years since V-Day began. Stay with us. 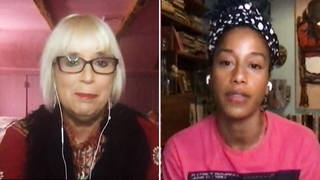