“The time to act is now.” That’s the message of survivors of last week’s school shooting in Florida. On Wednesday, the nation witnessed grieving students, parents and teachers powerfully confront the president and lawmakers over gun control in pointed—and often tense—televised exchanges. The day began with students across the United States—from Minnesota to Colorado to Arizona—walking out of class to demand stricter gun laws. Meanwhile, survivors of the shooting descended on the Florida state Capitol in Tallahassee to demand lawmakers pass legislation addressing gun violence before the legislative session ends. In the afternoon, President Trump—along with Vice President Mike Pence and Education Secretary Betsy DeVos—hosted a listening session with survivors of recent shootings, including students at Marjory Stoneman Douglas High School. Wednesday evening, survivors of the massacre at Stoneman Douglas High School sparred with politicians during a town hall hosted by CNN.

AMY GOODMAN: “The time to act is now.” That’s the message of survivors of last week’s school shooting in Florida. On Wednesday, the nation witnessed grieving students, parents and teachers powerfully confront the president and lawmakers over gun control in pointed—and often tense—televised exchanges. The day began with students across the United States, from Minnesota to Colorado to Arizona, walking out of class to demand stricter gun laws. They carried signs reading “Make us safe” and “Bring on the politicians! We will rise!” Students at Coral Springs High School formed a giant human heart on their school football field, as did students at Cooper City High School, to honor the 17 victims of the Marjory Stoneman Douglas High School shooting.

Meanwhile, survivors of the shooting descended on the Florida state Capitol in Tallahassee to demand lawmakers to pass legislation addressing gun violence before the legislative session ends in two weeks. This is student Sheryl Acquaroli.

SHERYL ACQUAROLI: Dear Congress, how can you claim to stand for the people but let your kids get slaughtered like animals in their own schools? Why is it that every time we make a step forward, you push us back? Dear Congress, how many of the thoughts and prayers I have received do I need to check in for some damn action? Because thoughts and prayers don’t mean anything without something behind it. And to be quite frank, thoughts and prayers won’t stop my brothers and my sisters from dying! … Dear Congress, who will die next because of your lack of action? Who will you murder next? Because your lack of action is causing people to die. The next—the next person who dies because of an AR-15 will be on you!

SAMUEL ZEIF: I don’t understand. I turned 18 the day after, woke up to the news that my best friend was gone. And I don’t understand why I could still go in a store and buy a weapon of war, an AR. I was reading today that a person, 20 years old, walked into a store and bought an AR-15 in five minutes with an expired ID. How is it that easy to buy this type of weapon? How have we not stopped this after Columbine? After Sandy Hook? I’m sitting with a mother that lost her son. It’s still happening.

In Australia, there was a shooting at a school in 1999. You know, after that, they took a lot of ideas, they put legislation together, and they stopped it. Can anyone here guess how many shootings there have been in a school since then in Australia? Zero. We need to do something. That’s why we’re here.

AMY GOODMAN: During the listening session, Trump suggested the solution to school shootings is arming teachers.

PRESIDENT DONALD TRUMP: It’s called concealed carry, where a teacher would have a concealed gun on them. They’d go for special training, and they would be there, and you would no longer have a gun-free zone. Gun-free zone, to a maniac—because they’re all cowards—a gun-free zone is, “Let’s go in, and let’s attack, because bullets aren’t coming back at us.”

AMY GOODMAN: Among those who objected to Trump’s plan is Mark Barden, who is a father who lost his 7-year-old son Daniel during the Sandy Hook shooting. He’s the founder and director of Sandy Hook Promise. This is Barden speaking during Wednesday’s listening session with Trump.

MARK BARDEN: This is my son Daniel. He was 7 years old when he was shot to death in his first grade classroom in Sandy Hook Elementary School just a little over five years ago. My wife Jackie could not be here today, because she’s a schoolteacher and she takes that job seriously and sent me as the ambassador. Jackie is a career educator. And she will tell you—she has spent over a decade in the Bronx. And she will tell you that schoolteachers have more than enough responsibilities right now than to have to have the awesome responsibility of lethal force to take a life. Thank you. Nobody wants to see a shootout in a school. And a deranged sociopath on his way to commit an act of murder in a school, with the outcome—knowing the outcome is going to be suicide, is not going to care if there’s somebody there with a gun. That’s their plan anyway.

AMY GOODMAN: On Wednesday evening, survivors of the massacre at Marjory Stoneman Douglas High School sparred with politicians during a town hall hosted by CNN. This is shooting survivor, Cameron Kasky questioning Florida Republican Senator Marco Rubio in one of the most powerful exchanges of the evening.

CAMERON KASKY: This is about people who are for making a difference to save us, and people who are against it and prefer money. So, Senator Rubio, can you tell me right now that you will not accept a single donation from the NRA in the future?

SEN. MARCO RUBIO: The positions I hold on these issues, as the Second Amendment, I’ve held since the day I entered office in the city of West Miami as an elected official. Number two—no, the answer to the question is that people buy into my agenda. And I do support the Second Amendment. And I also support the right of you and everyone here to be able to go to school and be safe. And I do support any law that would keep guns out of the hands of a deranged killer. And that’s why I support the things that I have stood for and fought for during my time here.

SEN. MARCO RUBIO: I—there—that is the wrong way to look—first of all, the answer is, people buy into my agenda.

CAMERON KASKY: You could say no.

CAMERON KASKY: Guys, be quiet. Be quiet. Come on. We’re going to be here all night.

CAMERON KASKY: Guys, guys, if you can [inaudible]—

JAKE TAPPER: Cameron is having a conversation with Senator Rubio. Let’s let them talk.

SEN. MARCO RUBIO: But I—listen, I respect—you can ask that question, and I can tell you that I—people buy into my agenda. I will answer any questions you guys have about any policy issues, where I stand on the issue.

CAMERON KASKY: Right now—guys, be quiet. Be quiet. You know, we’re going to be here all night.

SEN. MARCO RUBIO: And I will—and I just think that, ultimately, that is not our goal here. Our goal here is to move forward and—

CAMERON KASKY: Wait, so hold on.

SEN. MARCO RUBIO: —and prevent these from ever happening again.

CAMERON KASKY: So, right now, in the name—in the name of 17 people, you cannot ask the NRA to keep their money out of your campaign?

SEN. MARCO RUBIO: I think in the name of 17 people, I can pledge to you that I will support any law that will prevent a killer like this from getting a gun.

AMY GOODMAN: So, that was Cameron Kasky questioning his senator, Republican Senator Marco Rubio of Florida. We’re going to go to break, and when we come back, we’re going to Fort Lauderdale to speak with another person who attended the 7,000-capacity town hall last night held by CNN. Shana Rosenthal will join us. She is a former intern for Senator Rubio. Her New York Times op-ed is headlined “I Interned for Senator Rubio. Now I’m Begging Him to Act on Guns.” Stay with us.

NEXTFormer Parkland Student: I Interned for Senator Rubio. Now I’m Begging Him to Act on Guns 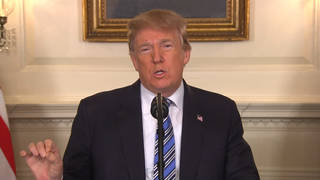