Dozens of farmworkers with the Coalition of Immokalee Workers have entered their last day of a 5-day fast outside the Manhattan office of Nelson Peltz, the board chair and largest shareholder of the restaurant chain Wendy’s. They are demanding Wendy’s sign onto the Fair Food Program, which would require the fast-food giant to purchase tomatoes from growers that follow a worker-designed code of conduct that includes a zero-tolerance policy for sexual harassment and abuse in the fields. Wendy’s is the only major fast-food chain that has refused to sign onto the Fair Food Program. Wendy’s competitors McDonald’s, Burger King, Subway, Chipotle and Taco Bell all have joined the Fair Food Program, which CIW members say has virtually ended sexual harassment and assault for tens of thousands of workers on participating farms in seven states. The fast today will end in a “Time’s Up Wendy’s” march in New York. For more, we are joined by Gerardo Reyes Chavez, a farmworker and an organizer with the Coalition of Immokalee Workers.

StoryJan 25, 2021“They Came Away with Their Dignity”: Striking NYC Workers Win Wage Hike After Surge of Solidarity

AMY GOODMAN: This is Democracy Now!, democracynow.org, The War and Peace Report, as we turn back to New York right now to talk about a massive protest that’s planned for today.

NERMEEN SHAIKH: Dozens of farmworkers with the Coalition of Immokalee Workers have entered their last day of a 5-day fast outside the Manhattan office of Nelson Peltz, the board chair and largest shareholder of the restaurant chain Wendy’s. They are demanding Wendy’s sign onto the Fair Food Program, which would require the fast-food giant to purchase tomatoes from growers that follow a worker-designed code of conduct that includes a zero-tolerance policy for sexual harassment and abuse in the fields. Wendy’s is the only major fast-food chain that has refused to sign onto the Fair Food Program. McDonald’s, Burger King, Subway, Chipotle and Taco Bell have already signed on, following protests by the Coalition of Immokalee Workers. Nely Rodriguez is one of the farmworkers taking part in the 5-day fast.

NELY RODRIGUEZ: [translated] It does not discourage us. On the contrary, Wendy’s refusal thus far to join the Fair Food Program gives us the strength to be here as women, as mothers with families, as young people, the entire community of Immokalee who is here to fight for respect in the fields where Wendy’s buys its tomatoes, and to show through our fast that we have a powerful commitment to this struggle. We’ve left behind our homes to show Wendy’s what this means to us, to show them that we’re committed to creating change for all women.

AMY GOODMAN: Wendy’s competitors—McDonald’s, Burger King, Subway, Chipotle and Taco Bell—all have joined the Fair Food Program, which the Coalition of Immokalee Workers say has virtually ended sexual harassment and assault for tens of thousands of workers on participating farms in seven states. The [fast today] will [end in] a “Time’s Up [Wendy’s]” march in New York. The fast today is going to end today.

For more, we’re joined by Gerardo Reyes Chavez, a farmworker and organizer with the Coalition of Immokalee Workers, usually in Florida, but right now here in New York.

You’re wrapping up your fast today with a major march here in New York on Wendy’s?

GERARDO REYES CHAVEZ: Yeah. Today is the last day of the five days that 81 people fasting in front of the headquarters of Trian Partners, which is where Nelson Peltz, one of the main investors and the president of the—president of the board of Wendy’s and the person who’s really holding the keys for Wendy’s, to come to dialogue and reach an agreement with us, is located. There are several people that are fasting with us in solidarity in different parts of the country. And we have been asking Wendy’s to join the Fair Food Program to make all the rights that we have expand to other areas, but, overall, to bring Wendy’s to the table, so that they don’t just go and exploit people in Mexico, which is what they did when we, as workers, were able to land all of these changes for the lives of tens of thousands of workers, eliminating sexual harassment and all of that. They basically punished their own growers, the people that they were doing business for years, for doing that. And they went to buy from Mexico, Bioparques de Occidente, a mega-farm that had 270 workers in modern-day slavery in 2013. Then they moved to buy there two years later.

NERMEEN SHAIKH: But what do you mean by “modern-day slavery”? What conditions do these workers have on the farms in Mexico?

GERARDO REYES CHAVEZ: Well, workers live in conditions where they didn’t have—the housing, for example, had no floors, no beds, no stoves, no bathrooms in some cases. And workers had to be freed by the intervention of the government in Mexico. So, when you imagine all of these things—children working in the fields, women being promised 100 pesos per day and end up receiving from 50 to 60, and not all of them—you can see that the conditions were really, really desperate for workers. And that’s what Wendy’s went to support. And that’s without even mentioning one of the situations that happens a lot, which is sexual harassment in the fields for farmworker women.

AMY GOODMAN: Democracy Now! reached out to Wendy’s for their response to the Coalition of Immokalee Workers’ demands. A Wendy’s spokesperson replied with a lengthy statement, which read, in part, “The Coalition of Immokalee Workers (CIW) is spreading false and misleading information about the Wendy’s brand and our business practices in their continuing effort to extract a financial commitment from us. We will not join their program and pay fees directly to them and we will certainly not compromise our commitment to our customers to deliver only the highest quality, ethically sourced products from Wendy’s every day. … All of our suppliers are bound to a strict Code of Conduct that requires ethical practices, and certain fresh produce suppliers, including all tomato suppliers, undergo third-party certified human rights assessments.” Gerardo, can you respond to what Wendy’s said? We’re sorry they wouldn’t come here in person or speak on the phone.

GERARDO REYES CHAVEZ: I mean, I would like to invite them to have an open discussion and debate, if they were ready to prove that what they are saying is true. What we know is that we created, you know, the Fair Food Program, and we have—as part of the Fair Food Program, there’s a third-party organization, which is the Fair Food Standards Council, led by a judge from New York, working on the bench for 20 years. And they are the organization in charge of monitoring the pass-through of the penny per pound from the buyers to the farmworkers directly. We could send you and a staff to show you how the bonus is marked. And we have all the data to show how the program works, from bottom to top. What Wendy’s is doing, basically—and that’s without mentioning that there’s 14 corporations that are doing this, that are working with us.

What Wendy’s is doing, it’s basically going from misleading statements to basically accusations without base. And what we are saying is, we invite them to join the Fair Food Program. We are not—we have all the information that’s needed to prove that the lives of the workers are changing. They can come anytime to see how it works in the farms. And it’s time for them to come to the table. They are—the way I see it is that they are kind of like a boxer. You know, we have been trying to bring them to the table for a while, and they have never gone too far as to basically just lie like this and insinuate that somehow we’re asking them to pay something that’s not going to the workers, because that’s something that they have been doing. What we’re saying is, it’s time for them to come to the table. And they are kind of swinging. They are feeling the pressure. So we know that they are going to join the program, but—

AMY GOODMAN: Where is your march today?

GERARDO REYES CHAVEZ: The march today, we are going to be marching from the Dag Hammarskjöld Plaza, which is on 2nd Avenue and East 47th.

AMY GOODMAN: Near the United Nations.

GERARDO REYES CHAVEZ: Yeah. And we hope to have thousands of people. We’re inviting people from New York to join us. And we know that Wendy’s is desperate. And those are the actions of a desperate corporation, which is good for us, you know? Children, women have come from Immokalee, live and work—

GERARDO REYES CHAVEZ: —are standing—yeah—are standing in the cold, and all for the purpose of having dialogue with them.

NERMEEN SHAIKH: Well, Gerardo, before we end, I just wanted you to say—you said 14 corporations are working with you, and they’re these massive fast-food chains—McDonald’s, Burger King. Did you face, initially, the same kind of resistance from them as you’re now facing from Wendy’s? And what finally persuaded them?

GERARDO REYES CHAVEZ: Well, what persuaded them is the power of people. You know, all the corporations, since the beginning, they recognize—not publicly, obviously, but they feel the pressure. When we take to the streets, they realize that they are not going to be able to get away with all the abusive conditions and the dismissal towards workers in their supply chain. And they end up signing.

We hope that Wendy’s takes this opportunity to, instead of paying a firm or whoever they are paying to write lies about how the program works, this collaboration would be, to join the program and make sure that they use their leadership as the only one of the five major fast-food corporations to do what’s right, to participate and help make all of this stronger and expand it, so that more workers are protected.

AMY GOODMAN: You’ll break your fast at the protest?

GERARDO REYES CHAVEZ: We will, yeah. We will.

AMY GOODMAN: Gerardo Reyes Chavez, farmworker, organizer with the Coalition of Immokalee Workers, began farmworking at the age of 11.

This is Democracy Now! When we come back, Rebecca Solnit joins us. Stay with us.

Rebecca Solnit on #MeToo, Mass Movements and the 10th Anniversary of “Men Explain Things to Me”

NEXTRebecca Solnit on #MeToo, Mass Movements and the 10th Anniversary of “Men Explain Things to Me” 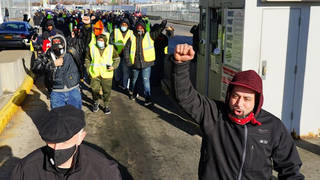