Dems Team Up with GOP to Weaken Bank Rules, Which Critics Say May Lead to More Bailouts & Misconduct

On Tuesday, 16 Senate Democrats joined with 50 Republicans to advance a bill slated to roll back key financial regulations passed in the wake of the 2008 financial crisis. The bill would exempt 25 of the nation’s 40 largest banks from being subject to heightened scrutiny by the Federal Reserve. If it passes, it would be the biggest weakening of the Dodd-Frank Act since it was signed into law in 2010. The 67-32 vote in favor of a “motion to proceed” now sends the bill back to the floor for debate and possible amendments before a final vote in the coming days. We speak to Alexis Goldstein, a senior policy analyst at Americans for Financial Reform.

AMY GOODMAN: On Tuesday, 16 Senate Democrats joined with 50 Republicans to advance a bill slated to roll back key financial regulations passed in the wake of the 2008 financial crisis. The bill would exempt 25 of the nation’s 40 largest banks from being subject to heightened scrutiny by the Federal Reserve. If it passes, it would be the biggest weakening of the Dodd-Frank Act since it was signed into law in 2010. The 67-32 vote in favor of a motion to proceed now sends the bill back to the floor to debate and possible amendments before a final vote in coming days. This is Democratic Senator Elizabeth Warren of Massachusetts speaking out against the Senate bank bill.

SEN. ELIZABETH WARREN: This bill is a punch in the gut to American consumers. If it passes, it will be harder to police banks that sell abusive mortgages, harder to police lenders who discriminate against their customers, and harder to police giant monopolies that build and sell and offer financing to mobile home buyers. Only a bunch of bank lobbyists—and their friends in Washington—would call this a consumer protection bill.

ALEXIS GOLDSTEIN: Thanks, Amy. It’s good to be here.

AMY GOODMAN: So, talk about how this has rolled forward. And although there is so much enormous partisan bickering in Washington, when it comes to this bank bill, a number of Democrats are joining with the Republicans. Explain what it will do.

ALEXIS GOLDSTEIN: So, this bill does three big things. One is that it’s going to make future bailouts more likely, because it rolls back these important safeguards and monitorings that were put in place after the last crisis, and was meant to learn from the mistakes of the last crisis. The other thing it’s going to do is it’s going to deregulate a lot of really, really large foreign banks, like Deutsche Bank, that have presences in the U.S., banks that, like Deutsche, gave large amounts of money and loans to folks like Donald Trump. And then, perhaps most worryingly, it’s going to possibly encourage further discrimination in mortgage lending, because it reduces the reporting requirements on basically 85 percent of banks, reporting requirements that are used to catch racial discrimination in lending when it occurs.

AMY GOODMAN: I want to turn to Democratic Senator Mark Warner of Virginia speaking to Bloomberg TV about why he supports the Senate bank bill.

SEN. MARK WARNER: We’ve been working on this legislation for four years, long before this president came into power, because we hear from community banks, credit unions, folks in our local communities, how some of the regulatory overburden for these smaller institutions has cut back on their lending ability. We want to give that relief. Now, I still believe the banks that caused the major challenge, the largest institutions, the so-called SIFI banks, we need to keep very strict standards in place regulating those institutions. This legislation does that. It does give the relief that we’ve been working on for four years.

AMY GOODMAN: So that’s Democratic Senator Mark Warner. Can you explain—respond to what he’s saying?

ALEXIS GOLDSTEIN: So, one thing that happened yesterday is the Congressional Budget Office put out its analysis of this bill. And one of the things that they said is there’s actually a 50 percent chance that banks like Citibank, which Mark Warner just said are not impacted by this bill, actually will benefit from this bill. The other thing that he’s saying, and a lot of the sponsors of this bill, which Senator Warner was one of the original sponsors, are saying, is this is just about community banks. But what this is about is quadruple—is, sorry, raising by five times the threshold by which you get that extra monitoring, by which you get that extra scrutiny by the Fed. It used to be $50 billion. They want to raise it five times, to $250 billion. So, banks of that size were very crucial to the financial crisis. Countrywide was a bank of that size, and they gave out one out of five of every mortgage in the country in the lead-up to the crisis. So these are not small players. Deutsche Bank is not a small player. UBS is not a small player. All of those banks would all be deregulated by this bill in substantial ways.

And let’s not forget the history here. The Fed had all of the tools they needed in order to address the last crisis, and they didn’t use them. So Congress made a specific choice in Dodd-Frank to say, “Hey, Fed, any bank above $50 billion, we’re going to require that you do all of these specific things, that you make them run stress tests, that you ensure they don’t operate on too much debt.” And this bill, unfortunately, is significantly weakening all of those very deliberate protections that Congress put in place after the last crisis.

SEN. SHERROD BROWN: We’re not doing infrastructure. We’re not dealing with the opioid crisis. We’re doing nothing here about guns. But we got time—we got time to do a lot for America’s largest thanks. These are banks whose collapse, with this deregulation—these are banks whose collapse could harm—could cause ripples across the world. Together, the country’s biggest banks took $239 billion in taxpayer bailouts. So, without the rigorous annual stress tests that we put in Dodd-Frank a decade ago, and we’re relaxing now, taxpayers could once again be on the hook if “too big to fail” banks collapse and we don’t have the right tools in place to see it coming.

And it opens the door. And this is—this is maybe even more unbelievable than the fact that this body is falling all over itself to help the biggest banks: This bill also weakens the oversight for foreign megabanks operating in the United States, the same banks that repeatedly violate U.S. laws.

AMY GOODMAN: So, is this bank bill a done deal, Alexis Goldstein?

ALEXIS GOLDSTEIN: It’s absolutely not. And a lot of the Democrats who voted yes on the motion to proceed can absolutely change their mind when this hits the Senate floor. The Congressional Budget Office, in my opinion, gave them all the justification they need to change their vote. The CBO said that this does make future bailouts more likely, and, again, there is a 50 percent chance it also helps really large banks like JPMorgan and Citigroup. So, if folks are fired up about this, you should absolutely call your senators and let them know to vote no on S. 2155, which is the bill number.

AMY GOODMAN: ThinkProgress reports many of the banks that are getting relief from this bill also finance assault weapons? Can you explain this?

ALEXIS GOLDSTEIN: So, ThinkProgress had a great article yesterday listing specifically all of the banks that finance assault weapons manufacturers. And there’s at least 12 banks on that list that also benefit from this bill, by my count. So these are banks like Citizens and Regions and other banks like that. And so, it just strikes me as a very strange time for the Democrats to be teaming up with Republicans to deregulate banks, including banks that are helping fund and finance the companies that are used in these horrible mass murders and shootings and school shootings that we’ve been seeing. The Democrats have a lot of leverage here. This is not a bill that could pass without 60 votes. They could be using that leverage to demand things. And, unfortunately, right now they’re not.

AMY GOODMAN: Well, before we go, I wanted to ask you about the resignation of President Trump’s top economic adviser, Gary Cohn, who opposed the president’s plan to impose tariffs on steel, aluminum. Cohn, the director of the National Economic Council, before taking that position, president of Goldman Sachs. Can you talk about the significance of his leaving?

AMY GOODMAN: Well, I want to thank you very much, Alexis Goldstein, for joining us, senior policy analyst at Americans for Financial Reform, nonpartisan coalition of over 200 groups working for a safe and ethical financial system, former Occupy Wall Street activist, who was, before that, a Wall Street banker.

And this update on our previous segment, as we talked about the teachers’ strike in West Virginia that’s just ended and what’s happening with Oklahoma teachers: We just got word that University of Illinois graduate students, who are on strike now, are occupying the President’s Office.

This is Democracy Now!, democracynow.org, The War and Peace Report. When we come back, we go to Texas, where the first midterm primaries took place yesterday. Are we going to see the year of the women? Stay with us. 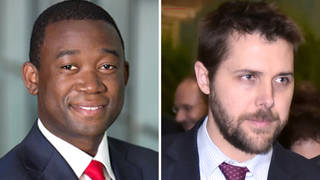