The United States is expected to introduce new sanctions against Russian companies with links to Syrian leader Bashar al-Assad, following the coordinated U.S., British and French military strikes against two alleged chemical weapons storage facilities and a research center in Syria on Friday night. Trump hailed the military strikes a success and declared in a tweet, “Mission Accomplished!” The military strikes came in response to an alleged chemical weapons attack in Douma over a week ago. “The United States has claimed, proclaimed that it wants to see and support the Syrian people’s revolution,” says our guest Ramah Kudaimi, “but in fact has really intervened in ways that have strengthened the [Syrian] regime.” Kudaimi is a Syrian-American activist, a member of the Syrian Solidarity Collective, and is on the National Committee of the War Resisters League.

AMY GOODMAN: The United States is expected to introduce new sanctions against Russian companies with links to Syrian leader Bashar al-Assad, following the coordinated U.S., British and French military strikes against two alleged chemical weapons storage facilities and a research center in Syria on Friday night. Trump hailed the military strikes a success in a tweet Saturday morning, writing, quote, “A perfectly executed strike last night. Thank you to France and the United Kingdom for their wisdom and the power of their fine Military. Could not have had a better result. Mission Accomplished!” Trump tweeted.

The military strikes came in response to an alleged chemical weapons attack in Douma over a week ago. The attack has not yet been independently investigated. On Sunday, United Nations chemical weapons investigators began examining the scene of the alleged attack, which came amidst a brutal campaign by the Syrian government to retake the rebel-held district of Eastern Ghouta, outside the capital Damascus.

A pro-Assad official told The New York Times the bases had been evacuated well before the coordinated military strikes, thanks to an advance warning from Russia. Multiple experts say the strikes were carefully coordinated to avoid escalating the U.S. role in the ongoing conflict. This is U.S. Ambassador to the U.N. Nikki Haley speaking Saturday at the United Nations.

NIKKI HALEY: Last night, we obliterated the major research facility that it used to assemble weapons of mass murder. I spoke to the president this morning, and he said, “If the Syrian regime uses this poisonous gas again, the United States is 'locked and loaded.'” When our president draws a red line, our president enforces the red line.

AMY GOODMAN: Over the weekend, crowds gathered in cities across the United States and the world to protest the U.S., British and French military strikes.

PRESIDENT EMMANUEL MACRON: [translated] Ten days ago, President Trump was saying the United States should withdraw from Syria. We convinced him. We convinced him that it was necessary to stay there in Syria. And I think that, on a diplomatic level, beyond what happened, those three strikes, which are one element—and, for me, that’s not the most important thing which is happening in Syria—we convinced him that we needed to stay for the long term. We also persuaded him that we needed to limit the strikes to chemical weapons sites, after things got a little carried away over tweets, as you know.

AMY GOODMAN: Fore more, we to Washington, D.C., where we’re joined by Ramah Kudaimi. She is a Syrian-American activist, a member of the Syrian Solidarity Collective and on the National Committee of the War Resisters League. Here in New York, we’re joined by Chelsea Manning, a network security specialist and advocate for government transparency, a queer, gender rights activist, also perhaps best known as an Army whistleblower who spent seven years in a military prison after leaking a trove of documents about the Iraq and Afghan wars and State Department to WikiLeaks in 2010. She’s currently running for U.S. Senate in her home state of Maryland.

We welcome you both to Democracy Now! But, Ramah, let’s begin with you. First, respond to the attack that took place this weekend on Syria—U.S., France and Britain.

RAMAH KUDAIMI: Thank you, Amy, for having me on. I think my first reaction when I heard these strikes were happening was: “Well, what’s new?” There’s been airstrikes against Syria by the Assad regime, by the United States, by Russia, by a whole slew of actors for years now, since 2012, since the people rose up against the brutal regime of Assad and demanded their freedom and dignity. And so, it was kind of infuriating to see this being presented as breaking news, this being presented as an apocalypse, that we’re about to embark on World War III, especially as has been made clear again and again by the U.S. actions is—and words, is that this was something very limited, just to kind of send a message to Bashar al-Assad that you can go on and kill people with barrel bombs, with anything, but don’t—limit your use of chemical weapons.

AMY GOODMAN: I want to turn to U.S. Ambassador to the United Nations Nikki Haley. In an interview with Fox News on Sunday, she outlined President Trump’s objectives in Syria and said U.S. troops would remain until these objectives are met.

AMY GOODMAN: So, Ramah Kudaimi, if you can respond to all of that? Again, President Trump having recently said he was pulling U.S. troops out of Syria?

RAMAH KUDAIMI: Yeah, and this has been U.S. policy. What Nikki Haley just outlined has really mostly been U.S. policy since under Obama. Nothing much has changed under Trump, in terms of the United States has claimed, proclaimed that, oh, it wants to see and support the Syrian people’s revolution, that it wants to see freedom and democracy in Syria, but in fact has really intervened in ways that have strengthened the regime. So, its primary goal, the defeat of ISIS, i.e. the “war on terror,” is really what’s brought the U.S. into Syria very forcefully. When they started bombing Syria in September 2014, it was against ISIS. And that’s been the—that’s really been where they focus most their energy.

Once in a while, as Trump did last year, as then Trump did this year, they’ll bomb a regime target—really an empty airfield, an empty chemical weapons factory—and then say, “See, we want Assad gone.” And yet, again and again, their actions have proven that, in fact, they want regime preservation. This is not something—they are not really concerned with the Syrian people’s demands for the fall of regime. They are concerned with continuing the “war on terror,” which has been the operation of the United States since 2001, and ensuring that we are constantly bombing, quote-unquote, “terrorists,” when in reality what the United States is doing, alongside with Russia, alongside with the regime, alongside with Iran, in Syria, is the fact that everyone claims that they are fighting terrorists. And what gets lost are Syrian people’s lives and dreams to live in a free and democratic Syria.

AMY GOODMAN: And the number of troops who are already on the ground, and the U.S. intervention even until this point of the bombing?

RAMAH KUDAIMI: So, there are about 2,000 U.S. troops. They are mostly in Kurdish-held areas in the northeast part of the country. And they’ve been there to train, really, the Syrian Democratic Forces, which are, again, mostly Kurdish groups fighting against ISIS. And the U.S. has been very clear to various rebel groups that it may have sent some arms to or some night goggles to in the past that “Your primary responsibility is to fight ISIS. We are not concerned with the regime. It is to fight ISIS.”

And so, again, this kind of—the story that we tell ourselves a lot of times in left circles and antiwar circles—you were talking about how, you know, this weekend people took to the streets to protest U.S. airstrikes. Where were—where have these protesters been? Since 2012, like I’ve said, there has been a war going on in Syria. There have been airstrikes going around in Syria. Since 2014, the United States itself has led a lot of these airstrikes against ISIS forces. But because we have accepted a lot of times that the “war on terror” is actually a good war, but as long as it’s not regime-change war, sadly, that’s what we see. We see people who will go up in arms when the regime might be targeted, and then go completely silent when schools and mosques and community centers, Syrian community centers, are all attacked by various forces in the name of fighting terrorism.

AMY GOODMAN: Ramah Kudaimi, we are going to break and come back to this discussion, also what evidence there is of the sites on the ground that have been attacked, what evidence so far is there that the Syrian government was responsible for the alleged chemical weapons attack, and other issues. We’ll also be joined by Chelsea Manning, one of the—well, I guess you could say the most famous whistleblower of the Iraq and Afghanistan wars. She’s running currently for U.S. Senate for Maryland. Stay with us.

Chelsea Manning on Trump’s Mission Accomplished Tweet: “I Believe I Have Heard Those Words Before”

NEXTChelsea Manning on Trump’s Mission Accomplished Tweet: “I Believe I Have Heard Those Words Before” 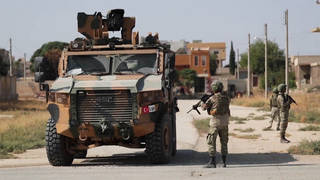