Tuesday was May Day, or International Workers’ Day, and hundreds of thousands of workers took to the streets worldwide. Major mobilizations were held across the globe, from San Juan, Puerto Rico, to Paris to Jakarta. We hear from May Day protesters here in New York.

AMY GOODMAN: This is Democracy Now!, as we continue on the, well, story of May Day, which was yesterday, International Workers’ Day, where hundreds of thousands of workers took to the streets worldwide, major mobilizations held across the globe, from San Juan, Puerto Rico, to Paris to Jakarta, Indonesia. We turn now to the voices of May Day protesters here in New York.

RISHEA FLUDD: My name is Rishea Fludd. I’m a volunteer member organizer with DC37. And we’re out here on May Day to basically talk about the labor movement and how we have to push forward, especially right now with the Janus v. AFSCME court case we have out there. So, that’s where we’re really going at, like letting the workers know what’s going on with that case and how it’s going to affect them.

SARAH JAFFE: I am Sarah Jaffe. I’m a labor journalist. May Day is a bit of American history that is mostly celebrated by other countries now. It’s not a thing that we remember as part of our own history, as part of an immigrant workers’ labor struggle a hundred-and-some-odd years ago.

ARIEL ZAKARISON: I’m Ariel Zakarison from DSA. May Day in 2018 is really returning to changing the hegemony that currently exists, to let workers know that they have power in collective struggle and that we need to be focusing on labor and where that intersects with all of these different issues that we’re running into with runaway, off-the-chain capitalism.

TINA SILVERMAN: My name is Tina Silverman, I teach at PS 54 in the Bronx. Teachers feel that their rights, their collective bargaining rights, are being deprived. There are teachers that have gone for years without a pay raise. They’re facing budgetary cutbacks, and they’re watching their schools being defunded left and right.

MOHAMED ATTIA: My name is Mohamed Attia. Now I am a co-director in the Street Vendor Project, after being a vendor for nine years. Most of the street vendors are immigrants. All of them are hard workers. And we have a lot, a lot of problems and a lot of struggle, with the system, with the government, with the police, with enforcement, in many, many aspects. Trump doesn’t see how important immigrants are to our country and to our city, and how much they benefit the whole community and the whole society.

MARTA VÉLEZ: My name is Marta. As a working woman, as a woman of color, as a Puerto Rican living in New York, I think it’s important to show that we’re not here to just abide by the rules of the rich. We also demand for our rights to be respected. And we demand to go above and beyond those rights, that they’re willing to give up on, and to show this much respect for our lives, for our quality of life, because how is it that the rich can have whatever quality of life they wish, and, you know, say, “Oh, it’s because of effort,” yet we work two, three jobs, and most of us don’t even have the time to come out and protest?

AMY GOODMAN: Voices of the streets of New York on May Day. Special thanks to Sam Alcoff and Charina Nadura and Nat Needham. This is Democracy Now! When we come back, prominent figures here in New York attempt to get into Israel, and they are banned. They are prevented from going in. We’ll talk to them. Stay with us.

Detained and Then Deported: U.S. Human Rights Lawyers Barred from Entry into Israel

NEXTDetained and Then Deported: U.S. Human Rights Lawyers Barred from Entry into Israel 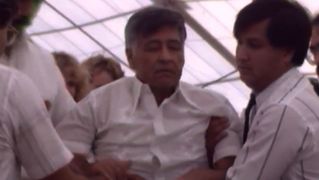 “Cesar’s Last Fast”: How Cesar Chavez Risked Death to Protect the Lives of Farmworkers He Championed