While the royal wedding has been heralded for celebrating black culture, the British government is facing ongoing scrutiny for hostile immigration policies that have targeted black immigrants. Last month, British Home Secretary Amber Rudd resigned amid an escalating scandal over how thousands of Caribbean immigrants who have lived in Britain for decades are facing discrimination and deportation despite having legally immigrated to Britain after World War II. Known as the Windrush generation, many of the immigrants never formalized their citizenship after they immigrated from former British colonies. Now, following harsh new anti-immigration laws enacted in 2012, many of them are facing eviction, unemployment and the possibility of deportation. The British government has admitted that more than 60 people may have been wrongfully deported. We speak with Gabrielle Bruney, editor for Esquire. Her new piece is “The Royal Wedding Celebrated the Contributions of Black Britons: But it comes amid a scandal rooted in the British government’s mistreatment of Caribbean people.” We are also joined by Priya Gopal, a university lecturer in the Faculty of English at the University of Cambridge.

JUAN GONZÁLEZ: I’d like to bring in Gabrielle Bruney, editor for Esquire, based in Brooklyn. You recently wrote a piece for Esquire titled “The Royal Wedding Celebrated the Contributions of Black Britons: But it comes amid a scandal rooted in the British government’s mistreatment of Caribbean people.” What is that scandal?

GABRIELLE BRUNEY: Well, that would be the Windrush scandal, which boils down to the government treating British Caribbeans, who are in the country legally—legal citizens—as if they were illegal immigrants. And in the U.K. at the moment, treating someone as if they’re an illegal immigrant means treating them very harshly—you know, depriving them of housing, their job potentially, and perhaps even deporting them.

AMY GOODMAN: And why is it called the Windrush generation?

GABRIELLE BRUNEY: Well, it’s named that for the boat that carried the first group of this generation of Caribbean people to the U.K. The boat was called the Empire Windrush.

JUAN GONZÁLEZ: And this migration started when? Can you give us a little bit of the history of it?

GABRIELLE BRUNEY: Sure. Well, the Empire Windrush docked in the U.K. in 1948. To give an idea of the extent to which these people were part of the British Empire, were British subjects, the Evening Standard from 1948, with a picture of the ship on it, it said “Welcome Home.” You know, that was the headline. So, it was a real sense that these people are part of our country. And the wave of migration continued until about 1971.

AMY GOODMAN: With labor very much needed and wanted and encouraged by the British government.

GABRIELLE BRUNEY: Yes. They were augmenting the post-World War II workforce. They were actually invited. So not only were they already British citizens, they were invited to come to, you know, the motherland to work.

DAVID LAMMY: The relationship between this country and the West Indies and Caribbean is inextricable. The first British ships arrived in the Caribbean in 1623. And despite slavery, despite colonization, 25,000 Caribbeans served in the First World War and Second World War alongside British troops. When my parents and their generation arrived in this country on the Nationality Act 1948, they arrived here as British citizens. It is inhumane and cruel for so many of that Windrush generation to have suffered so long in this condition and for the secretary of state only to have made a statement today on this issue.

AMY GOODMAN: So, that is British Labour MP David Lammy, deeply impassioned about this issue. I mean, some people being jailed or deported who have lived in Britain for over half a century?

GABRIELLE BRUNEY: Yes. There was one publicized case of a man who had cancer, and because he was being treated as an undocumented person, he was denied cancer treatment by the state healthcare. And people were actually deported and threatened with deportation, and lived with that looming over their heads. One man said that he was preparing to commit suicide if they actually went through with it and deported him to Jamaica.

JUAN GONZÁLEZ: Talk about your own family, when they came, and their experience.

GABRIELLE BRUNEY: Well, I’m the child of Caribbean immigrants who grew up under British rule. My mother grew up in Dominica singing “God Save the Queen” every day, with the queen on her money and her notebooks. And my grandparents made the decision to come to America, but others in my family decided to go to the U.K., so I have cousins and relatives there. So it’s very easy for me to imagine how, if my grandparents made a different decision, my parents could have been affected by the Windrush, and I could have been affected by the Windrush, because there’s not birthright citizenship in the U.K., so if your parents are decided to have been illegal immigrants, now you’re in danger.

AMY GOODMAN: So talk about your thoughts and feelings over this weekend and the massive attention paid to the royal wedding.

GABRIELLE BRUNEY: Well, it was very—it made me very happy to see that—you know, it is somewhat vacant symbolism, but that’s nice enough, that black people were being celebrated by this wedding. I think that the black American contributions were a lot more visible, perhaps because we are American, and, you know, the bishop is an American, and the songs, “This Little Light of Mine,” “Stand By Me,” are American songs. But there were contributions by black Brits and by black Brits of Caribbean origin. So, Sheku Kanneh-Mason is half-Antiguan. And—

AMY GOODMAN: The first black musician to win the BBC classical music competition in its history.

GABRIELLE BRUNEY: Exactly. And his father is from Antigua. And the Kingdom Choir is a choir based in South East London, which is a Caribbean bastion in London. So, you know, it was subtle, but there was that messaging of, you know, “You are part of this empire, you are part of this crown,” whatever that might mean to individual subjects.

AMY GOODMAN: You had this scandal in December where one of the royals—what, Princess Michael of Kent or something—wore a Black Sambo brooch on her suit.

GABRIELLE BRUNEY: Yes. Well, she wore that to her first meeting with Meghan Markle, so, you know, which was so alarming. I mean, I personally was wondering what Meghan Markle was getting herself into, marrying into this particular institution, you know, because the monarchy does tend to be an institution that changes people who join it. It doesn’t adapt to them. So, this wedding was at least some signaling that they are trying to move towards a more diverse image.

AMY GOODMAN: She was later forced to apologize for that.

AMY GOODMAN: But on this whole issue of should the monarchy be abolished, let’s go to Priya and then to you. Priya Gopal, what do you feel?

PRIYA GOPAL: Well, I think it seems clear that having an institution which embodies both feudal privilege and accrues so much private wealth and plays a political role in this country, whether it admits it or not, really has no place in a society which should be seeking to be just and fair, equal and democratic. The monarchy is not a democratic institution. It never can be. And so, I think that, absolutely, if Britain is to consider itself a democratic country, the monarchy should be abolished. There is absolutely no basis for any single family to accrue so much wealth, privilege and, frankly, political power to itself. The British Republicans tend to make the case on the basis that it is anachronistic. As I have said, I don’t think that is the only reason to abolish it, but it certainly is incompatible with any country that seeks to be democratic.

And let me just add one other thing here. Meghan Markle has been able to join this family on terms which are not available to other people who are marrying foreigners. Under the hostile environment that has been created by the Conservative government for immigration in this country, there are now minimum salary requirements before somebody who is a British citizen can marry someone from outside. And I personally know, from students, that people who don’t earn the equivalent of a minimum of $25,000 can’t bring their loved ones into this country. So Meghan Markle is actually able to bypass a lot of the constraints and oppressive structures that other people have to struggle with, and that seems to me fundamentally unequal and undemocratic. And we need to understand that the hostile environment that other immigrants face in this country, which is only getting worse with Brexit, is not something that she is going to have to deal with, precisely because of undemocratic privilege.

GABRIELLE BRUNEY: Well, I’m not sure whether or not the monarchy should be abolished. But here in the U.S., we don’t have one, and yet it seems we’re always trying to create one. You know, what is Camelot and the Kennedys, if not our own attempts at monarchy building? So I think there is potentially some value in having a figurehead, if only so that the real government does not then become, you know, a Bush-Clinton dynasty situation.

AMY GOODMAN: Well, it’s interesting you say that. Meghan Markle is a Noam Chomsky fan. She posted a photo of Noam’s Chomsky’s book, Who Rules the World? on her Instagram page last summer. Chomsky told The Guardian, quote, “I’ve heard about the marriage, but didn’t know about Markle’s interests. Naturally pleased to hear it. Sounds as though she may, for many reasons, shake up the royal family.” When asked about the monarchy, Chomsky has quoted the philosopher Peter Slezak, who said, quote, “Royalty serves a useful purpose, he [Slezak] said: the pomp and ceremony helps undermine respect for state authority.”

We want to thank you both for being with us. Gabrielle Bruney, we’ll link to your piece in Esquire. And we want to thank Priya Gopal of Cambridge University in England.

This is Democracy Now! When we come back, again, the movement for impeachment grows. Stay with us.

President Trump Is Not “Above the Law”: John Bonifaz Warns Against Normalizing Impeachable Offenses

NEXTPresident Trump Is Not “Above the Law”: John Bonifaz Warns Against Normalizing Impeachable Offenses 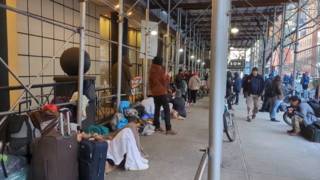