On the Big Island in Hawaii, the Kilauea volcano is continuing to erupt, spewing plumes of ash and lava. Lava is flowing increasingly close to the Puna Geothermal Venture plant, or PGV, which provides 25 percent of the Big Island’s energy. Workers are rushing to shut down the power plant to prevent the uncontrollable release of toxic gases from the site. The PGV came online in 1989 amid controversy over its location on what some residents say is sacred land. Many native Hawaiians believe the volcano is home to Pele, the goddess of fire. Others say that though geothermal energy is renewable, the plant poses risks to the health of residents and the environment. In Honolulu, we speak with Brittany Lyte, a reporter for Honolulu Civil Beat. Her recent article is titled “Workers Scramble to Seal Wells at Geothermal Plant Threatened by Lava.”

NERMEEN SHAIKH: We now turn to Hawaii’s Big Island, where the Kilauea volcano is continuing to erupt, spewing plumes of ash and lava. Workers are rushing to shut down a nearby geothermal power plant to prevent the uncontrollable release of toxic gases from the site. Lava is flowing increasingly close to the Puna Geothermal Venture plant, or PGV, which provides 25 percent of the Big Island’s energy. Hawaii officials held a press conference on Tuesday to provide an update. This is Governor David Ige.

GOV. DAVID IGE: We’ve been monitoring what’s happening at PGV, constantly watching the lava flow and the threat to the PGV plant. Tremendous progress has been made in the last 24 hours, as you know. Ten of the 11 wells are quenched. We do believe that KS-14, the last well, is plugged. And, you know, we feel that we are at a safe place now.

NERMEEN SHAIKH: PGV came online in 1989 amid controversy over its location on what some residents say is sacred land. Many native Hawaiians believe the volcano is home to Pele, the goddess of fire. Others say that though geothermal energy is renewable, the plant poses risks to the health of residents and the environment.

AMY GOODMAN: Meanwhile, Kilauea’s 19-day eruption is showing no sign of easing, with repeated explosions at its summit and fountains of lava up to 160 feet from giant fissures on its side. Hawaii’s Civil Defense Agency warned motorists, boaters and beachgoers to beware of toxic clouds of so-called laze, a combination of lava and haze, which formed as two streams of hot lava poured into seawater. This is Hawaii resident Ikaika Marzo.

IKAIKA MARZO: The lava had reached the ocean at 11:00 last night. So, the flow that is going into the ocean is creating sulfuric acid and hydrochloric acid. So, all the people that are living south of the flow will have that plume. All the gases will be kind of getting close to where they’re at. And that’s not a good sign.

AMY GOODMAN: The lava has destroyed at least 44 homes in the Puna district. Two thousand people have been evacuated from the area.

For more, we go to Honolulu, where we’re joined by Brittany Lyte, reporter for the Honolulu Civil Beat, her recent article headlined “Workers Scramble to Seal Wells at Geothermal Plant Threatened by Lava.”

Welcome to Democracy Now!, Brittany. Start off by talking about this geothermal plant, the threat to it, whether it looks like the lava might not hit at this moment. And also, you went to Big Island. What is the scene there?

BRITTANY LYTE: So, the big risk that officials are concerned about is what will happen if the lava does inundate the plant site. The lava has reached the property, but it hasn’t run over the wells that are there. If the lava does run over the wells that are there, it will sort of be this great experiment. This has never happened before at any other geothermal plant. There hasn’t been lava that has done this before. So there are a lot of unknowns.

Officials are saying that things are safe, as far as they can see. They’re monitoring it very, very closely. But what could happen is the lava could trigger a release of deadly gases, namely, a gas that, when people inhale it in small levels, it can be really irritable to your lungs, to your eyes, but if you do breathe it in, even just a few breaths at a high level, it can kill you. So, there is some concern about that. But right now officials are saying it’s safe.

NERMEEN SHAIKH: And what about the situation, Brittany Lyte, of the workers who are at the plant?

BRITTANY LYTE: So, the workers at the plant have been forced to evacuate the premises over two days, due to high levels of toxic gas in the air. But currently they’re at the site working. They have quenched the majority of these wells. One of the wells, they were having difficulty quenching, and so they’ve applied this mud-like substance to it in order to prevent any interaction if the lava does reach the well. Quenching involves basically just dumping really cold water down the well in order to depressurize it. So, workers are there now. Things are safe to work on. But the issue is: What if the lava does creep closer? The lava currently is about 200 to 300 meters from these wells, and it’s moving very slowly closer.

AMY GOODMAN: I mean, these are just amazing, apocalyptic scenes of this red lava that is flowing through Big Island. Can you talk about the history of some of the tension between some of the residents of Hawaii, especially indigenous people, and the PGV, explaining the spiritual reasons some of the residents have opposed the plant, the geothermal plant?

BRITTANY LYTE: Yeah. So, the geothermal plant is actually a pretty substantial part of the state’s effort to reduce its reliability on fossil fuels. So, there are lots of people who support this type of energy. On the other hand, you have native Hawaiians and other people who are not supportive of the plant, because they think that it is not necessarily a good idea to be tapping the energy of the lava for energy, because Pele, the goddess of the volcano, they think that she would not approve of this. So there is that factor.

The other factor is that there are some health—known health risks associated with geothermal plants when the plant becomes compromised. So, you know, for a situation like this, where the lava is encroaching the plant property, you know, what could happen if there is an uncontrolled release of gas, this is a concern for people. There’s a neighborhood that is right up against the plant property. And so, people who live there are concerned about what the potential health risks could be.

AMY GOODMAN: And, of course, the geothermal threat isn’t the only threat. A cloud of noxious gases, Time is reporting, glass particles, lava haze, known as “laze,” is affecting Hawaii after the lava flowed into the Pacific Ocean. Finally, is there a possibility of mass evacuation of Big Island?

BRITTANY LYTE: Right now there is not. The lava is actually affecting a very small portion of the island. So most of the island is open for tourism, totally safe. But this very concentrated area where the lava is, you know, there are some people who have evacuated. Officials are not calling for an evacuation due to the lava being at the geothermal plant at this time. Again, they are closely monitoring that situation, and that could change. But at this time, that is not an issue.

I was over there this weekend, and the lava is putting on an incredible show. I think as much as homeowners and residents of that area are, you know, distraught over the loss of property there—the lava is now covering 1,700 acres, it’s destroyed 50 structures—so, as much as that is causing heartache and alarm, I think people are also sort of cheering the lava on. You know, the lava is the product of Pele, the goddess of the volcano, and people think that she is sort of taking over the land and really creating new land. This is destruction, but through the destruction is the birth of this new land, creating new topography.

AMY GOODMAN: The Guardian has an interesting piece, “Hawaii’s evacuees on why they live under a volcano: it’s affordable.” Brittany Lyte, I want to thank you very much for being with us, reporter for the Honolulu Civil Beat. We’ll link to your piece, “Workers Scramble to Seal Wells at Geothermal Plant Threatened by Lava,” speaking to us from Honolulu.

This is Democracy Now! When we come back, a disturbing, astonishing new film being released by HBO this weekend. It involves sexual abuse of children, of a child, of the filmmaker we’ll be speaking to next. Stay with us. 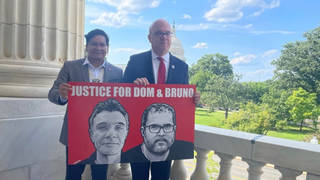