Nearly 90,000 Hondurans May Be Deported to Danger and Poverty as Trump Ends Their Protected Status

The Trump administration announced Friday it is ending temporary protected status for nearly 90,000 Hondurans now living in the United States, saying they must return home. TPS is an immigration status granted to foreign nationals who can’t safely return to their home countries, and allows them to legally live and work in the United States. Hondurans were first given TPS in 1999 after Hurricane Mitch devastated the country. Critics note Honduras remains the one of the world’s most violent countries. The Trump administration has also ended protections for El Salvador, Haiti, Nepal, Nicaragua and Sudan. Only South Sudan and Syria were renewed. An estimated 300,000 people will be impacted overall. We get response from Patricia Montes, an immigrant from Honduras and executive director of Centro Presente in Boston, Massachusetts, which has worked with members from Honduras and Central America since the 1980s. She also has family members who will lose their temporary protected status.

AMY GOODMAN: This is Democracy Now! I’m Amy Goodman. The Trump administration announced Friday it’s ending temporary protective status, so-called TPS, for nearly 90,000 Hondurans now living in the United States, saying they must return home. TPS is an immigration status granted to foreign nationals who can’t safely return to their home countries, and allows them to legally live and work in the United States. Hondurans were first given TPS in 1999 after Hurricane Mitch devastated Honduras.

On Friday, Homeland Security Secretary Kirstjen Nielsen said, quote, “Based on careful consideration of available information, including recommendations received as part of an inter-agency consultation process, the Secretary determined that the disruption of living conditions in Honduras from Hurricane Mitch that served as the basis for its TPS designation has decreased to a degree that it should no longer be regarded as substantial,” unquote.

Meanwhile, critics note Honduras remains one of the world’s most violent countries. The Trump administration has also ended protections for people from El Salvador, Haiti, Nepal, Nicaragua and Sudan. Only South Sudan and Syria TPS were renewed. An estimated 300,000 people will be impacted overall. On Friday, the government of Honduras said it regrets the cancellation of TPS, and pledged free legal and consular support for Hondurans in the U.S.

Patricia Montes is an immigrant from Honduras. She’s executive director of the Centro Presente in Boston, Massachusetts, which has worked with members from Honduras and Central America since the 1980s. She also has family members who lost—will lose their TPS status.

Welcome to Democracy Now!, Patricia. Let’s start off with your family. What will happen to them? And what does it mean? What is the timetable for 90,000 Hondurans having to leave the United States?

PATRICIA MONTES: Obviously, this strategy that the government, U.S. government, is using is part of a larger strategy to criminalize the undocumented immigrant community in the United States, especially black and Latino immigrants. And, of course, I’m from Honduras, and I have family that also had TPS. Our case is not unique, that we’re talking about hundreds of families that are confronting this problem at this moment, and not just immigrants, as you said, from Honduras, but also El Salvador, Nicaragua, Haiti and many other countries that are being at this moment criminalized by this administration.

AMY GOODMAN: Can you talk about your challenge, that you have joined, to stop the dropping of TPS for Hondurans?

PATRICIA MONTES: I think it’s very challenging, especially because Honduras, as a country, is not ready to receive people that are being deported from the U.S. and other countries like Mexico. As you mentioned before, Honduras is one of the most violent countries in the world. And earlier this year, the United Nations Economic Commission for Latin America and the Caribbean declared that Honduras is the most poor country in Latin America, displacing Haiti. And we had a coup d’état in 2009. Unfortunately, the U.S. government, under the Obama administration, supported that coup d’état. And that coup d’état had—you know, after that coup d’état, we have a lot of systemic violations in the country. And more recently, we had elections, elections that were illegal, because our constitution, the Honduran constitution, does not allow presidential re-election. And there is a lot of, you know, repression in the country right now. Hundreds of protests are being repressed in the country. Thirty-eight people were killed by the Honduran army. Obviously the country is not ready to receive people that are going to be potentially deported from the United States.

AMY GOODMAN: During a Senate committee hearing in January, California Senator Dianne Feinstein questioned Homeland Security Secretary Kirstjen Nielsen about whether the Trump administration’s steps to cancel TPS were racially motivated in the case of Haiti. Feinstein spoke after President Trump made comments in which he used the word referred to immigrants from Africa, El Salvador and Haiti as being from “s—hole”—but he used the full word—countries.

SEN. DIANNE FEINSTEIN: In light of the reports about the president’s recent comments, I hope you’re ready to specifically address one issue in particular, and that’s the termination of temporary protected status, known as TPS, for Haitians. In light of the president’s comments, I’m forced to question whether the decision to terminate protected status for Haitian nationals was in fact racially motivated. I hope not.

AMY GOODMAN: Also, Senator Feinstein asked Secretary Kirstjen Nielsen if she thought the TPS law should be changed. This was the homeland secretary’s response.

HOMELAND SECURITY SECRETARY KIRSTJEN NIELSEN: This was meant to be a temporary status, as you know. The difficulty with that is when people are here for 20-plus years, in the case of El Salvador, they have roots. They’re contributing to the society. They’re otherwise making our economy strong. So, yes, we do need to look at this and find a better way to come up with a permanent solution.

AMY GOODMAN: Patricia Montes, can you tell us what your plans are today on the steps of the state House in Massachusetts?

PATRICIA MONTES: Definitely. And we also believe, truly believe, that the fact that they terminated TPS is a discriminatory act against black and Latino immigrants that are protected under TPS. Today we have an action because we are demanding justice for people. We are denouncing these violations of human rights for people that are protected under TPS in the U.S. And we also want to raise awareness about what is going on in Honduras right now. I think it’s urgent for people to understand here in the United States the connections between forced migration and the U.S. foreign policy. And it’s also urgent for people to understand that countries like Haiti, El Salvador, Honduras and Nicaragua are not ready to receive these people that potentially can be deported to these countries.

AMY GOODMAN: Patricia Montes, can you talk about how U.S. policy towards Honduras affects the number of Hondurans who are fleeing back to the United States? Just last November, the highly discredited election that took place in Honduras, with the re-election of the incumbent president, Hernández, that was questioned by every organization, from the Organization of American States and many others, many thousands of Hondurans protesting in the streets, calling for a new election. How does that affect the number of Hondurans who come here?

PATRICIA MONTES: It’s extremely connected. And historically, the U.S. foreign policy is connected with forced migration from Honduras. During the '80s, it was the civil conflict. And now it's extreme violence that is taking place. And it’s extremely connected. When the U.S. government is supporting a coup d’état, when the U.S. government is supporting an election that is illegal, because the Honduran constitution does not allow the presidential election, of course it is connected. Thousands of Hondurans are leaving the country as a result of extreme violence. Eighty percent of the 1,000 immigrants that are in the caravan right now, looking for international protection in the United States, and that are being criminalized by this government, are escaping from violence. That violence, that is extremely connected with the policies that this country has been imposing in our countries of origin for decades.

AMY GOODMAN: Is there anything else you would like to add, as you head off to this state House action today with Congressmember McGovern, also Joe Kennedy?

PATRICIA MONTES: We are part of a national coalition that is—that has been going and visiting migrant-sending countries like Mexico, Honduras and El Salvador. Alliance Americas is the name of the coalition. And we are inviting, actually, today, formally inviting Congressmen Kennedy and McGovern to come with us to visit the region and have meetings with civil society organizations that are there in Honduras and El Salvador defending human rights, because I think that they need to understand what is going on there and have a conversation with civil society organizations there, not just with the Honduran government.

AMY GOODMAN: I want to thank you, Patricia Montes. Finally, how long will Hondurans have right now? Is it 18 months, if this TPS—if the rescinding of TPS for Hondurans is not stopped by a court?

PATRICIA MONTES: They have 18 months. And we hope that the community is going to be the protagonist of this struggle. We would like to see the immigrant community fighting for their rights here and also in our countries of origin. I think it’s extremely important for them to be part of an organized strategy and fight for their rights.

AMY GOODMAN: Patricia Montes, immigrant from Honduras, executive director of Centro Presente, speaking to us from Boston, Massachusetts. She has been working with members from Honduras and Central America since the ’80s, also has family members herself who—themselves who will lose temporary protected status. 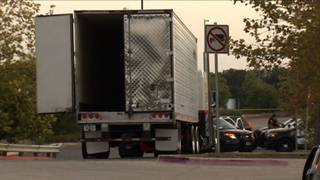