The Supreme Court has ruled 5 to 4 to uphold Ohio’s aggressive purging of voters from the rolls. The ruling means that states can remove people from voter rolls if they miss a few elections and then fail to respond to notices from election officials. One survey found nearly 150,000 people were removed from the voting rolls in recent years in Ohio’s three largest counties alone. Critics say the court’s decision is yet another victory for conservatives trying to restrict voting rights. We speak with Ari Berman, senior writer at Mother Jones and a reporting fellow at The Nation Institute. His latest article is headlined “The Supreme Court Is Helping Republicans Kill a Key Voting Rights Law.”

AMY GOODMAN: We turn to Washington, where the Supreme Court has ruled 5 to 4 to uphold Ohio’s aggressive purging of voters from the rolls. One survey found nearly 150,000 people were removed from the voting rolls in recent years in Ohio’s three largest counties alone. Critics say the court’s decision is yet another victory for conservatives trying to restrict voting rights.

For more, we’re joined by Ari Berman, senior writer at Mother Jones, reporting fellow at The Nation Institute. His latest pieces are titled “The Supreme Court Is Helping Republicans Kill a Key Voting Rights Law” [link] and “We Now Know Why Steve Bannon and Kris Kobach Lobbied for a Citizenship Question on the Census” [link].

Welcome back to Democracy Now!, Ari.

AMY GOODMAN: So, talk about this decision.

ARI BERMAN: Well, it’s a really big decision, because Ohio has purged 2 million voters since 2011, more than any other state. African-American voters in the state’s three largest counties were purged at twice the rate of whites. So it appears that this purging has been discriminatory.

And one of the ways that Ohio purges, they remove infrequent voters from the rolls. So, if you don’t vote in an election, Ohio sends you a mailer. If you don’t respond to that mailer to confirm your registration and you miss two more elections, you are purged from the rolls, even if you are still eligible to vote.

So what Ohio is doing is they’re using a new way of purging to try to kick people off the voting rolls. And this is very disturbing not just because Ohio is such an important swing state, but because this could open the door to more voter purging by Republican states and really, in a lot of ways, compromise people’s most fundamental right.

AMY GOODMAN: In her dissent, Justice Sonia Sotomayor wrote, “Congress enacted the [National Voter Registration Act] against the backdrop of substantial efforts by States to disenfranchise low-income and minority voters, including programs that purged eligible voters from registration lists because they failed to vote in prior elections.” Sotomayor went on to write, “The Court errs in ignoring this history and distorting the statutory text … ultimately sanctioning the very purging that Congress expressly sought to protect against,” she added.

ARI BERMAN: And I think this was so important, because this is a very technical case about how you can and can’t purge, but Sotomayor brought up the bigger picture, which is, we have a very, very long history in this country of voter suppression and of discriminating against people when they try to vote. And the National Voter Registration Act of 1993, which was really the second major piece of voting rights legislation, after the Voting Rights Act of 1965, allowed people to register at DMVs and other public agencies, and was an incredibly important law.

And what Republicans are trying to do now is they’re trying to weaken a key voting rights law to make it easier to purge the voting rolls. This is just one of many voter suppression tactics we’re seeing, along with voter ID laws, cutting early voting, making it harder to register to vote. Voter purging is part of this. And it’s a relic of the Jim Crow era. This was done in the Jim Crow South: make it as hard as possible for black voters to be able to register, and even if they do register, then you purge them from the rolls. And what Sotomayor is saying: History is repeating itself here; we are gutting the very law that was passed to prevent this kind of thing from happening.

AMY GOODMAN: Talk about the role of the newest justice, Neil Gorsuch.

ARI BERMAN: Well, every 5-4 decision on the Supreme Court, you have to remember, Amy, is likely a result of the fact that Mitch McConnell and Republicans in the Senate stole a Supreme Court seat from President Obama, and Donald Trump put Neil Gorsuch on the court. So, this case in Ohio only happened because there was a stolen Supreme Court seat. And it’s really amazing that not only are they stealing a Supreme Court seat, they’re stealing a Supreme Court seat and then they’re making it harder for people to be able to vote. So this is really a two-pronged attack on democracy. First you deny the will of the people, in that President Obama should have been able to make this appointment because he was elected in 2012, and then, not only that, you deny the will of the people by then making it harder for them to vote in the first place.

AMY GOODMAN: So, talk about the person on which this case was based.

ARI BERMAN: So, the case was based on a guy by the name of Larry Harmon. He was a Navy vet. What happened is, he voted in 2008, and then he didn’t vote for a few elections, and then he showed up in 2015 to vote on a local referendum, and he found that he was no longer on the voter rolls. And usually you’re only removed from the voter rolls if you’re ineligible to vote, meaning you’ve died or you’ve moved or you’ve committed a crime or done something else to try to change your status. He hadn’t done anything. He still lived at the same place. He had voted in the past. But he was removed from the voter rolls.

And the thing about voter purging that really is so problematic is that people don’t know that they’re purged from the rolls until they show up at the polls. Then they’re not able to vote, and there’s nothing they can do about it. And so, that’s what happened in Ohio. That’s what happened to thousands of people in Ohio. And the worry is that more Republican states are going to try to do this thing in the future.

AMY GOODMAN: Very quickly, if you can talk about the piece you wrote about Kris Kobach?

ARI BERMAN: Well, we now know that Steve Bannon, then the White House chief adviser, and Kris Kobach, the Kansas secretary of state, former chair of Donald Trump’s election integrity commission, pushed for a question on the census, a citizenship question on the census, for the first time since 1950. And this question is going to drastically diminish responses from immigrants. It’s going to threaten the entire accuracy of the census, which is so critical for democracy. And the reason they wanted this question on the census, a new document shows, was to exclude noncitizens from counting towards political representation. That would be a dramatic rewrite of the Constitution, of democratic norms. And what it would do is it would deny immigrant communities, places like New York and California, significant representation, and it would shift representation to whiter and more Republican areas. And so, what Kris Kobach and Steve Bannon are doing is they’re trying to weaponize the census to fit the Trump administration’s aims, try to help Republicans politically, try to hurt immigrant communities in more diverse states.

AMY GOODMAN: Ari, you tweeted yesterday, “55 years ago today NAACP field secretary Medgar Evers [was] assassinated by KKK in Mississippi. A reminder of the blood shed fighting for voting rights.”

ARI BERMAN: My worry is that history is repeating itself here, that so many people, like Medgar Evers, paid the highest price—their lives—fighting for their right to vote, and, 50 years later, we have a Supreme Court, we have a Republican Party, that is undermining that most fundamental right, that is finding new ways to try to disenfranchise people, whether it’s voter ID laws or voter purging or cutting back on the amount of time that people have to vote. This is, as Justice Breyer once said, old poison in new bottles. We’ve seen this before. We’ve seen the disenfranchisement of Americans before, people like Medgar Evers died for. And for us to be going backwards in such a dramatic way, for the Supreme Court to be undermining such a core right, to me, is just extremely disturbing and something that we really have to pay a lot of attention to.

AMY GOODMAN: Finally, your biggest concerns for the midterm elections that are coming up this year?

ARI BERMAN: Well, my biggest concern is that so many Republican-controlled states have new voting restrictions in effect now. Twenty-three states have passed new voting restrictions, in effect, for the first time in—since 2010. Not only that, we have gerrymandered maps all across the country. The Supreme Court may strike that down, or they may uphold it, which means that all the gerrymandering will continue in 2018 and 2020. So, I think we’d like to believe that we have totally free and fair elections in this country, but there are a lot of ways in which people’s right to vote are being undermined. And so, when we look at who’s going to win the election, we also have to look at the conditions under which the elections are going to take place in the first place.

AMY GOODMAN: Ari Berman, senior writer at Mother Jones, reporting fellow at The Nation Institute. We’ll link to your pieces. Your book, Give Us the Ballot: The Modern Struggle for Voting Rights in America. The pieces, “The Supreme Court Is Helping Republicans Kill a Key Voting Rights Law” [link] and “We Now Know Why Steve Bannon and Kris Kobach Lobbied for a Citizenship Question on the Census” [link].

Special Report: In the Streets with the New Poor People’s Campaign Against Racism and Poverty

NEXTSpecial Report: In the Streets with the New Poor People’s Campaign Against Racism and Poverty 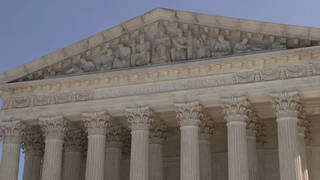