A new investigation has uncovered rampant sexual violence against Yemeni prisoners held in prisons run by the United Arab Emirates in Yemen. The Associated Press reports that in March, 15 officers lined up the prisoners in the southern city of Aden and ordered them to undress before searching their anal cavities, claiming they were looking for contraband cell phones. The prisoners screamed and cried and those who resisted were beaten and threatened by dogs.
Hundreds of prisoners reportedly suffered similar abuse. A Pentagon spokesman quoted in the piece said the allegations were not substantiated. The UAE is a key ally of the United States and has partnered with Saudi Arabia in its military assault on Yemen. We speak with Maggie Michael, the reporter who broke these stories. She is the Associated Press based in Cairo. Her latest exposé is headlined “Detainees held without charges decry Emiratis’ sexual abuses.” Last year, she reported on prisons in a piece headlined, “In Yemen’s secret prisons, UAE tortures and US interrogates.”

NERMEEN SHAIKH: We turn now to a shocking new investigation of rampant sexual violence against Yemeni detainees held in prisons run by the United Arab Emirates in Yemen. The Associated Press reports that in March, 15 officers lined up the prisoners in the southern city of Aden and ordered them to undress, before searching their anal cavities, claiming they were looking for contraband cellphones. The men screamed and cried, and those who resisted were beaten and threatened by dogs. Hundreds of detainees reportedly suffered similar abuse. Witnesses told the AP that detainees were raped while other guards filmed the assaults. AP also reports that Yemeni guards, working under Emirati officers, electrocuted prisoners’ genitals and sexually violated others with wooden and steel poles. A Pentagon spokesman quoted in the piece said the allegations were not substantiated.

AMY GOODMAN: The UAE is a key ally of the United States and has partnered with Saudi Arabia in its military assault on Yemen. Last year, AP exposed the existence of secret prisons run by the United Arab Emirates in Yemen where torture was widespread.

For more, we’re going to Cairo to speak with Maggie Michael, the AP journalist who wrote the exposé, the headline “Detainees held without charges decry Emiratis’ sexual abuses.”

Welcome to Democracy Now! Maggie, talk about what you found.

MAGGIE MICHAEL: Hi. Our investigation started in 2016, and since that time we have been speaking to witnesses, to security officials, families, and finally, in this investigation, we managed to speak to prisoners inside the prisons. They’re talking about how sexual abuse is being used as a way to extract confessions, and sometimes to turn them into informants to the Emiratis, who are supervising and running prisons, directly or indirectly, through their own allies of security forces they set up in southern Yemen.

Our investigation last year exposed a network of 18 prisons in cities of Aden and Mukalla. And our investigation this year found that of these five—of these prisons, at least five, there’s a lot of sexual abuse happening to detainees. And what’s different this time is that we also spoke to officials who were at one point allied with the Emiratis. They were working for them, and then they defected. Their testimonies were very important to confirm what the prisoners and what the families have been saying all the time, that they’re being held without charges, no trials. Even those who were granted prosecutors’ like orders to be released, they’re still kept in detention. The officials—I mean, one of them, at least—was was involved in the torture. He confirmed that they were filming detainees while being raped, in order to press them, in order to turn them into informants.

NERMEEN SHAIKH: Well, can you say, Maggie, the drawings, some of which our television viewers can now see, the drawings that you received from the prisoners, how you got access to those drawings?

MAGGIE MICHAEL: The thing is, we communicated with the prisoners inside Beir Ahmed in Aden, southern Yemen, and one of them is a really good artist, who, in order to answer my questions about what exactly is happening, he decided to show it to me by drawing positions of torture, abuse, and then took pictures and then—by phones, and then sent them by WhatsApp, and this is how we got them. And lately, they have been finding it hard to use the same way, and we relied more on text messages from inside the prison.

AMY GOODMAN: Maggie, you were told by some prisoners that the American personnel in the prisons were there in uniform and must be aware of the torture. One senior security official at the prison in the city of Mukalla said, in your piece, “Americans use Emiratis as gloves to do their dirty work.” Explain what U.S. involvement is.

MAGGIE MICHAEL: Based on what we had last year and this year, Americans are in main base of Emiratis in Yemen. So this is including Mukalla, Balhaf in Shabwa, and there’s a place called Buriqa. These have American interrogators. There are American personnel in uniform. There are also mercenaries, including Americans.

The main mission is interrogation. And what we were told also, that torture does not happen in front of the Americans, but they are aware of it, either by hearing people being tortured or by seeing marks of torture on their bodies. What this official in Riyan, in Mukalla, told me is that Americans are aware of what’s happening, and they’re not only aware, they’re actually part of it. And instead of doing the torture themselves in order to get confessions, they’re using the Emiratis to do their dirty work.

NERMEEN SHAIKH: And, Maggie, can you talk about the role of the United Arab Emirates? I mean, now it’s taken a leading role in the Saudi assault on Yemen, in particular its assault on Hodeidah—the crucial port of Hodeidah.

MAGGIE MICHAEL: This is the dilemma of the Yemeni government. On one side, it needs the Emiratis because it’s leading the forces that are fighting the Houthi rebels, who occupy northern Yemen since 2015, in order to liberate and take over Hodeidah port from the Houthis. Hodeidah is known as the mouth of Yemen. This is where most of the humanitarian aid and imports get through northern Yemen, where the strong majority of the population is concentrated. So the port is very important for the two sides—for the government and for the Houthis. So the government needs and relies on the Emiratis in taking over Hodeidah.

At the same time, in southern Yemen, where the government should be having the upper hand, instead the Emiratis have taken the lead. They set up their own militias in every single city. Each of these militias have their own tribal and regional agenda. And they set up prisons. They took control. It undermined, to a great extent, the Yemeni government. And until just last week, the president of Yemen was barred from returning to the government for nearly a year. He was in Saudi Arabia. And we reported that, based on his own aides and commanders, he couldn’t get back to Yemen because the Emiratis didn’t want him to return.

MAGGIE MICHAEL: Only with the start of the Hodeidah assault—

AMY GOODMAN: We just have 30 seconds, and I just wanted to quickly ask—

AMY GOODMAN: Is the U.S. involved with giving lists of names of Yemenis to the Emiratis to jail?

MAGGIE MICHAEL: The Americans have a list of most-wanted men, but not every single man arrested by the Emiratis are on the list. The Emiratis are trying to get information about the men on the list through mass arrests.

AMY GOODMAN: Maggie Michael, we want to thank you for being with us. We’re going to link to your piece. Maggie is a reporter for Associated Press. Her latest piece, “Detainees held without charges decry Emiratis’ sexual abuses.” We’ll also link to her last year’s piece, “In Yemen’s secret prisons, UAE tortures and US interrogates.” 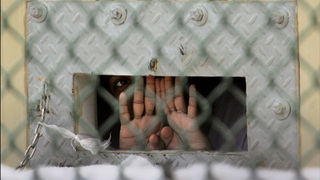