A federal judge has ruled that the Trump administration may not arbitrarily detain people seeking asylum. U.S. District Judge James Boasberg ruled asylum seekers who have passed a credible fear interview should be given humanitarian parole, not indefinite detention. The suit was brought by the American Civil Liberties Union, Human Rights First and the Center for Gender and Refugee Studies. We speak with Eunice Lee, co-legal director at the Center for Gender and Refugee Studies.

NERMEEN SHAIKH: A federal judge has ruled that the Trump administration may not arbitrarily detain people seeking asylum. U.S. District Judge James Boasberg ruled asylum seekers who have passed a credible fear interview should be given humanitarian parole, not indefinite detention. The suit was brought by the American Civil Liberties Union, Human Rights First and the Center for Gender and Refugee Studies. Siding with nine plaintiffs who have been awaiting asylum determinations, Judge Boasberg ordered the government to begin case-by-case release reviews at five ICE offices where he said detention had become the “default” operation: Los Angeles; Detroit; Philadelphia; Newark, New Jersey; and El Paso, Texas.

AMY GOODMAN: The ruling comes in the midst of the Trump administration’s “zero tolerance” crackdown against immigrants. Earlier this month, Attorney General Jeff Sessions announced domestic violence will no longer be grounds for asylum—a far-reaching shift that could affect thousands of women fleeing gender-based violence, particularly from Central America.

ATTORNEY GENERAL JEFF SESSIONS: You do not get to come to America if you have a private threat or a—someone personally attacks you. You do not get to have asylum for that. It’s based on your race, your religion, your nationality, that you’re part of some special, identifiable group that’s being persecuted in your home country. That’s what it takes to have an asylum. And we need to get this straight. And I think it will help us, the decision I made. I believe it’s right legally. I’m totally confident it’s consistent with the intent of the drafters of the INA, our law. And I believe it will help us manage our caseloads better and give more focus to the people who deserve to be given asylum, and help us eliminate those that are not worthy of this asylum.

AMY GOODMAN: Meanwhile, on Tuesday, Attorney General Sessions rescinded a 2011 Department of Justice guidance that dictated refugees and asylum seekers have the right to work in the United States.

Well, for more, we’re joined by Eunice Lee. She’s co-legal director at the Center for Gender and Refugee Studies, one of the groups that brought the challenge against the Trump administration’s immigration detention policies.

Welcome to Democracy Now!, Eunice. Start off by talking about the significance of Judge Boasberg’s ruling.

EUNICE LEE: Thank you, Amy. And thank you for having me on your show.

So, the judge’s order essentially just required the government to do what it should have been doing all along, which is provide a meaningful opportunity for individuals who are asylum seekers in immigration detention to be released after they pass their credible fear interviews. And, in fact, the department’s own written guidance states that there’s a presumption of release, unless the individual poses an individualized flight risk or danger that warrants their detention. And, in fact, the judge’s ruling recognized that this is not what ICE has been doing in the five field offices where we brought suit, and he ordered the government to follow its own written policy.

NERMEEN SHAIKH: And, Eunice, can you explain why this ruling applies only to these five jurisdictions?

EUNICE LEE: Sure. So we brought suit in five jurisdictions where asylum seekers there were facing detention rates of 90-plus percent. So, for 90-plus percent of our class plaintiffs, they were, in fact, not being released. They were being denied release or parole, as it’s called, despite this written guidance that states that they should be released unless there is a real need to detain them. And what we saw with these 90-plus percent denial rates is that, essentially, there was no meaningful review of detention decisions by ICE, and there was near-blanket detention of people who should have been released, you know, after establishing a credible fear of persecution.

AMY GOODMAN: So, these five jurisdictions—Los Angeles, Detroit, Philadelphia, Newark and El Paso—explain exactly what will come out of this now. I assume the government is appealing this. But if they were to follow Boasberg’s ruling, what has to happen? Will thousands of people be released?

EUNICE LEE: Well, we haven’t yet seen that the government is appealing this. And, in fact, what the judge’s order orders—requires the government to do is to provide a review of a person’s detention. And this should be an automatic review that applies a presumption that favors release. So, in general, the department’s guidance states that it’s not in the public interest to detain asylum seekers unnecessarily after they pass their initial screening interview establishing a likelihood of asylum eligibility. So, what will happen after this order takes effect is that ICE will have to go back, and for our class members who are asylum seekers in detention in these five jurisdictions, ICE will have to actually provide a meaningful process to review whether their detention is necessary.

NERMEEN SHAIKH: And could other jurisdictions eventually benefit from this ruling?

AMY GOODMAN: Let me ask you about the case of Ansly Damus, the named plaintiff in the lawsuit, in Damus v. Nielsen. As explained by the ACLU, Ansly is an ethics teacher in his early forties who fled violence and political persecution in Haiti after speaking out against the corruption of a local politician. He was attacked by a local gang, whose members severely beat him, set his motorcycle on fire, threatened to kill him. Fearing for his life, he fled […] Haiti, leaving behind his wife, 8-year-old daughter and 4-year-old son. He not only passed his screening, but an immigration judge here granted his application twice. In each instance, the U.S. government appealed the decision, extending his case proceedings. Yet he’s currently locked up in Ohio, where immigrant detainees are kept in windowless rooms. And he has not been allowed outside in 16 months, in well over a year?

EUNICE LEE: That’s right, Amy. So, our lead plaintiff, Mr. Damus, as you mentioned, is an ethics teacher from Haiti who fled political persecution, and he came to our shores seeking protection. And as you note, he was, in fact, granted twice—granted asylum twice by an immigration judge, and both times the government appealed. And the government, during all this time, which it’s now been over a year and a half, has refused to release him, despite multiple requests by his attorney, or by him, brought, you know, together with his attorney. And he has provided all sorts of information to show that he is not a flight risk or a danger. I mean, he was an ethics teacher in Haiti. He has community support. He had a letter from a pastor. He had a place to live. He has no criminal history. And yet ICE has denied multiple requests for him to be released, even after an immigration judge twice granted him asylum, which was appealed by the department.

NERMEEN SHAIKH: Eunice, could you explain whether Judge Boasberg’s ruling will apply to any of the families of the over 2,000 children who have been separated from their parents, who the Trump administration is threatening to detain together, the parents and the children? Will the ruling affect that at all?

EUNICE LEE: So, the ruling—the class members in our suit do include some parents who were separated from their children. But I do want to clarify that the class members are those individuals who presented at a border—at a port of entry, so either Border Patrol port of entry or an airport, and they were taken into immigration custody from there. So, the suit does not apply to families who first crossed the border and then were later apprehended by immigration officials. But, you know, as I said, there are families who presented together at a border point of entry and who were separated by immigration authorities, and our lawsuit would apply to the parents in those circumstances who were separated from their children and are in detention.

AMY GOODMAN: And again, how many people does your case—does your suit cover?

EUNICE LEE: So, we estimate that there are over a thousand class members each year detained in these five jurisdictions. So, it should—you know, going forward, it should affect several hundred to over a thousand individuals in detention each year.

EUNICE LEE:* Right. So—exactly. So, the reason many people are forced to cross in between ports of entry is exactly as you said, because ICE—or, because CBP, Customs and Border Protection, is simply not letting people through. They’re not accepting people who are trying to go to the ports of entry and say, “I would like to seek asylum.” And, in fact, they are supposed to allow folks to seek asylum. Our laws provide a right to seek asylum. We’ve signed on to international treaties that oblige us to recognize that right. And yet, asylum seekers are still being turned away at ports of entry. And this is, as you say, creating a humanitarian crisis for folks who are waiting for their turn, and driving many people in desperation to cross first and then ask for asylum.

AMY GOODMAN: Eunice Lee, we want to thank you very much for being with us, co-legal director at the Center for Gender and Refugee Studies, co-counsel on the litigation challenging the Trump administration’s immigration detention policies. A federal judge has just ruled in their favor.

This is Democracy Now! When we come back, we go to El Paso, Texas. We’ll learn about a woman inside one of the detention facilities who’s been organizing other mothers separated from their children. Stay with us. 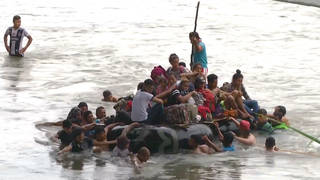