As more than 100 fires rage in the western United States, Interior Secretary Ryan Zinke wrote an op-ed last week in USA Today about forest management on public lands that blamed “radical environmentalists” for the fires. “Most Americans get it, that climate change is no longer something that they can just wish away in this administration,” responds Joel Clement, who served as director of the Office of Policy Analysis at the U.S. Interior Department until July of 2017 and worked at the Interior Department for seven years. We also speak with Ben Lefebvre, an energy reporter for Politico who has done a series of stories on Zinke’s alleged ethics violations.

AMY GOODMAN: This is Democracy Now!. I’m Amy Goodman. As more than a hundred fires rage in the western United States, Interior Secretary Ryan Zinke wrote an op-ed last week in USA Today about forest management on public lands, again, saying, quote, “Radical environmentalists would have you believe forest management means clear cutting forests and national parks. But their rhetoric could not be further from the truth. They make outdated and unscientific arguments, void of facts, because they cannot defend the merits of their policy preferences year after year as our forests and homes burn to the ground,” Zinke wrote. That was last week.

Well, after Zinke was interrupted Saturday at his speech in Steamboat Springs, Colorado, he went to Northern California, where the deadly Carr Fire has destroyed more than a thousand homes, spoke again about wildfires and climate change and what he called “extreme environmentalists.” A clip from an interview in a local station, KCRA 3, in California.

INTERIOR SECRETARY RYAN ZINKE: I’ve heard the climate change, you know, argument back and forth. This has nothing to do with climate change. This has to do with active forest management. … The extreme environmentalists, that again have shut down public access, they talk about habitat, and yet they’re willing to let it burn up.

AMY GOODMAN: For more, we are joined via Democracy Now! video stream from Maine by Joel Clement, who served as director of the Office of Policy Analysis at the U.S. Interior Department until, well, one year ago, July 2017. He worked at the Interior Department for seven years, now a senior fellow at Harvard’s Belfer Center for Science and International Affairs and at the Union of Concerned Scientists.

Ben, before we go to Joel Clement, formerly with the Interior Department, is it true that Ryan Zinke is currently, now that Scott Pruitt is out, the most investigated secretary of the Trump administration, with 14 investigations ongoing?

BEN LEFEBVRE: Correct. He’s had investigations almost from the start with his travel, use of charter planes and, you know, going to political fundraisers as—during travel that, you know, was put about by his official role as secretary. So he’s had quite a number of investigations. You know, it almost averages out like one to two per month of his tenure there.

AMY GOODMAN: And if you could talk about this comment about radical environmentalists and, in the tradition of the Trump administration, his fierce climate denialism?

BEN LEFEBVRE: Yeah, his remarks about the wildfires is interesting in that Montana had a major wildfire not too long ago, a few years ago. If you go to Glacier National Park, you can still see the scars on the mountainsides where a lot of trees had burned down. And so, the wildfires gets to be an issue among Montana politicians. But while I’ve been told that, you know, the—removing the waste trees or the downed trees from the forest, there’s a policy debate to be had on that.

Zinke and some other Montana Republicans, including Senator Steve Daines, kind of use this phrase “radical environmentalists” quite often. And what I’ve been told by folks in Montana is that’s somewhat of a political dog whistle for Zinke and Daines to reach out to far-right constituencies in Montana, some of the anti-government folks out there, the folks that may be sympathetic to the Bundy incident with the ranchers kind of fighting with the government employees. It’s kind of a way to shore up votes for their—you know, when they run for office. There’s been speculation that Zinke may run for governor in Montana in 2020, so this might be a way for him to kind of use a bullhorn to, you know, perk the ears up of those folks.

AMY GOODMAN: Joel Clement, you left the Interior Department under Zinke. Can you explain why? And also, in listening to this conversation, if you can comment on his latest—this latest corporate venture he wants to engage in, this brewery on public land?

JOEL CLEMENT: Yeah, Amy, I left the agency last fall, after, last summer, we were—we, dozens of senior executives—were reassigned suddenly in a late-night email. I blew the whistle on that, because it was clearly, in my view, retaliation for my work on climate change issues. I resigned a few months later. And I have to say, I kind of pine for those days when we were just worried about discrimination and retaliation last summer, because now, as your other speakers have noted, we’re getting into some unethical and potentially unlawful behavior. So, things have changed quite a lot. And particularly—

AMY GOODMAN: Well, in your area of expertise—

AMY GOODMAN: —in this last minute we have on this issue of climate change, if you can comment on what the secretary is saying and if it surprises you?

JOEL CLEMENT: It doesn’t surprise me that’s where they’re coming from right now. They’re clearly not going to acknowledge climate change. But it is important—the right answer to Americans right now who are worried about safety in the face of wildfire or other extreme events is to say, “We’re working on protecting Americans,” not “We need to get rid of these extreme environmentalists and go logging out in the forest.” We need to protect communities. We need to protect our infrastructure. We need to start paying attention closely to the impacts of climate change. Because we understand that most Americans get it, that climate change is no longer something that they can just wish away in this administration.

AMY GOODMAN: Well, Joel Clement, we want to thank you for being with us, served in the Department of Interior until he quit last year. And I want to thank Ben Lefebvre. We will link to your articles in Politico, energy reporter there, doing a series of exposés on the current secretary of the interior.

That does it for our show. Democracy Now! has a job opening for a full-time broadcast engineer. Check our website at democracynow.org. I’m Amy Goodman. Thanks so much for joining us. 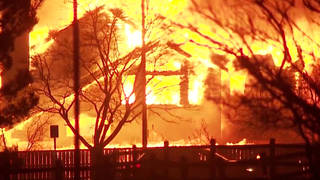