Thousands of mourners gathered in Yemen’s northern city of Saada Monday for the funerals of 51 people, including 40 children, who were killed in a U.S.-backed, Saudi-led coalition airstrike on a school bus last week. The massacre of school boys between the ages of 6 and 11 was one of the worst attacks on children in the history of Yemen’s brutal war. Images posted online suggest a U.S.-built Mark 82 bomb was used in the bombing. We speak with Shireen Al-Adeimi, a Yemeni scholar and activist and an assistant professor at Michigan State University. Her latest piece for In These Times is titled “Fine Print in Defense Bill Acknowledges U.S.-Backed War in Yemen Will Go On Indefinitely.”

AMY GOODMAN: This is Democracy Now!, democracynow.org, The War and Peace Report. I’m Amy Goodman. As we continue to look at Yemen, we now turn to an absolutely critical report on what has been taking place in Yemen right now: the bombing of a school bus. The bombing of a school bus. Thousands of mourners gathered in the northern city of Saada for funerals of 51 people, including 40 children killed in a U.S.-backed, Saudi-led coalition airstrike on a school bus last week. Images posted online suggest a U.S.-built Mark 82 bomb was used in the bombing. The massacre of school boys between the ages of 6 and 11 was one of the worst attacks on children in the history of Yemen’s brutal war. This is Moussa Abdullah, who witnessed the bombing.

MOUSSA ABDULLAH: [translated] The strike happened in the middle of the market, and it targeted a bus carrying children. Our shops were open, and the shoppers were walking around as usual. All of those who died were residents, children and shop owners.

AMY GOODMAN: The children had spent the day celebrating the end of summer school by taking a field trip to a cemetery, one of the last remaining green spaces in a region devastated by war. Video released by Houthi media captures the school boys laughing and talking on the bus. Just hours later, most of the kids in the video were dead. This is Hussein Hussin Tayeb, whose son Ahmed was killed in the bombing.

HUSSEIN HUSSIN TAYEB: [translated] I was one of the first people on the scene. As soon as I arrived with others wanting to help out, we figured we had to quickly nurse the wounded, because there was chaos. People were running over bodies and shouting. It was a scary situation, very scary. But may God give us patience from his strength.

REPORTER: [translated] Did you find your children here?

HUSSEIN HUSSIN TAYEB: [translated] As I was nursing people, I lifted a body and found that it was Ahmed’s face. I carried him and hugged him. He was my son.

AMY GOODMAN: U.N. Secretary-General António Guterres has condemned the airstrike, calling for an independent investigation into the deadly attack. Saudi Arabia responded by saying it will launch its own investigation, claiming the airstrike was a legitimate military operation. U.S. Defense Secretary James Mattis said Sunday he’s sending a three-star general to Riyadh to assist the Saudi investigation. The U.S.-backed, Saudi-led bombing campaign has repeatedly been accused of committing war crimes by targeting civilians.

We’re going now to East Lansing, Michigan, to speak with Shireen Al-Adeimi, a Yemeni scholar and activist, assistant professor at Michigan State University, her latest piece for In These times headlined “Fine Print in Defense Bill Acknowledges U.S.-Backed War in Yemen Will Go On Indefinitely.”

We welcome you back to Democracy Now!, Shireen. Talk about this bombing, where it was, who was killed.

SHIREEN AL-ADEIMI: Good morning, Amy. Well, this is just the latest string, unfortunately, of really brutal attacks on civilians in Yemen. It’s not the worst of its kind in terms of the numbers of people killed, but certainly because all of the—40 out of the 51 people who were killed were children, it really is just an extreme form of this Saudi-led coalition bombing in Yemen. And, you know, here were these kids on a school trip. They were excited. There’s footage: We see them laughing and really being excited. Some of the parents said that they couldn’t really sleep the night before because they were so looking forward to—you know, and here’s the sad part—they’re going to a cemetery just to be able to enjoy some time outside. And, you know, as the bus entered a busy market, it was targeted by the Saudi-led coalition, and most of these children were killed. Of course, we know that the U.S. is part of the Saudi-led coalition, so we are in fact responsible, just as much as the Saudis and Emiratis are, in the bombing of those children.

AMY GOODMAN: And explain what’s happened since. You have the U.N. calling for an independent investigation, Saudi Arabia—that killed them—saying no, Saudi Arabia backed by the United States, and now General Mattis saying he’s sending a general to Saudi Arabia to help with the investigation.

SHIREEN AL-ADEIMI: Well, it’s just preposterous to think that they are continuously allowed to investigate their own crimes. We’ve seen this committee that they’ve put together and the kinds of investigations they’ve done in the past. Remember, this is not the first massacre in Yemen. Two years ago, they killed 120 people in a market. They also killed 140 mourners in a funeral hall. And, of course, every single day, there are airstrikes and casualties and civilians who have been killed by Saudi-led airstrikes. And they’ve essentially absolved themselves of all wrongdoing every time they’ve investigated themselves. And of course they would. Who would trust a criminal to investigate his or her own crimes?

And so, and for the U.S. to say that, you know, we’re going to send a general, well, the U.S. is also part of this coalition that has targeted civilians since three-and-a-half years ago, since this war started. And what Yemenis need is really an independent investigation, which has been put forward in the U.N. twice already and has been rejected by the Saudi-led coalition, and the U.S., unfortunately, has provided cover for the Saudi-led coalition at the U.N.

So, we need an independent investigation, yes, but the Saudis have already admitted that they’ve targeted this bus. They have said that this was a legitimate target. They’ve characterized the children inside the bus as people who were responsible for launching missiles into Saudi Arabia. And then the colonel, the spokesperson of the Saudi-led coalition, went on to say that those who launch missiles into Saudi Arabia will get what they deserve. So, they’ve already admitted that they’ve targeted the bus. They’ve characterized those children as missile launchers. And, you know, what is there to investigate? We know who was the only party capable of committing such acts in Yemen, which is the Saudi-led coalition. We know that they’ve done this over and over again. And so, really, what would an investigation even prove, that we don’t already know?

AMY GOODMAN: This colonel, Turki al-Malki, the spokesperson for the Saudi-led coalition, saying, “No, this is not children in the bus. We do have high-standard measures for targeting.” Shireen Al-Adeimi, what does the U.S. military bill that President Trump signed off on yesterday at Fort Drum, New York, this unprecedented bill, a record-setting $716 billion military spending bill, $82 billion above the current year, say about Yemen?

SHIREEN AL-ADEIMI: Well, if you remember, Amy, the Congress has now twice tried to invoke—has invoked the War Powers Resolution to try to extricate the U.S. from Yemen, and Congress passed a resolution back in December of last year acknowledging that the U.S. is at war in Yemen without congressional approval. So now here we have this defense bill that just got passed, and certain—some senators and congresspeople have managed to insert some Yemen provisions that are meant to limit U.S. military spending on refueling missions in Yemen.

We know that the Saudi-led military—Saudi-led coalition relies on the U.S. military to refuel their jets midair. This is just one of the many services that the U.S. provides for the Saudi-led coalition. But this bill contained these provisions saying that this money cannot be used toward midair refueling, but when you look at the language, it allows for some exceptions. So it says that the secretary of state can issue a waiver. And it says that these midair refueling missions can occur as long as the Saudis and the Emiratis show that they are taking certain actions to prevent civilian casualties.

So, again, this is very vague language that essentially provides a loophole for using military spending toward midair refueling, and, in essence, it contradicts Congress’s earlier stance of saying that “We are in Yemen. This is not authorized by Congress.” But here we are allowing midair refueling under certain conditions, which, again, does nothing to protect the Yemeni citizens from Saudi bombs, U.S.-sold bombs to the Saudis, and the U.S. assistance of the Saudi-led military.

AP Investigation: Behind the Scenes in Yemen, U.S.-Backed Saudi Coalition Is Working with al-Qaeda

NEXTAP Investigation: Behind the Scenes in Yemen, U.S.-Backed Saudi Coalition Is Working with al-Qaeda 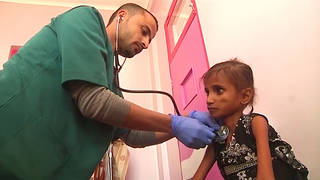