ICE Arrests Husband Taking Pregnant Wife to Hospital to Give Birth, Forcing Her to Drive Alone

In San Bernardino, California, Immigration and Customs Enforcement agents arrested a man driving his pregnant wife to the hospital to give birth last Wednesday, sparking widespread outrage. The ICE agents detained Joel Arrona-Lara when he stopped at a gas station, forcing his wife, Maria del Carmen Venegas, to drive herself to the hospital for her scheduled C-section. The couple has lived in the United States for more than 10 years and has five children, including their newborn baby. For more, we speak with Joel Arrona-Lara’s lawyer Russell Jauregui, staff attorney at the San Bernardino Community Service Center.

AMY GOODMAN: We begin today’s show in California, where Immigration and Customs Enforcement agents detained and arrested a man who was taking his pregnant wife to the hospital to give birth. Joel Arrona-Lara was driving his wife Maria del Carmen Venegas to a San Bernardino hospital Wednesday morning for a scheduled C-section when ICE agents detained him at a gas station. Surveillance video shows two ICE vehicles surrounding the couple’s car immediately after they pulled into the station to get gas. Maria del Carmen Venegas said agents asked the couple for identification, but that her husband had left his documents at home in the rush to get to the hospital. ICE agents then handcuffed him and took him into custody, leaving the 9-month-pregnant Venegas at the gas station sobbing in distress. She then drove herself to the hospital and gave birth alone several hours later.

ICE said, in a statement, Joel Arrona-Lara was detained because he’s wanted in Mexico on homicide charges. But Arrona-Lara’s lawyer says the charges are unconfirmed and that he has no criminal record. Videos of the incident circulated online over the weekend, sparking national outrage. But ICE issued a statement saying, quote, ”ICE will no longer exempt classes or categories of removable aliens from potential enforcement. All of those in violation of the immigration laws may be subject to immigration arrest, detention and, if found removable by final order, removal from the United States.”

Here’s Maria del Carmen Venegas speaking about her husband’s detention from the hospital.

MARIA DEL CARMEN VENEGAS: [translated] It’s very difficult, because he’s always been there. And he told me that everything was going to be OK, that I shouldn’t worry, that we were going to meet the baby, things like that. So, to be alone yesterday as I was, I felt terrible.

AMY GOODMAN: Arrona-Lara and his wife have been living in the United states for 12 years. They have five children, three of whom are U.S. citizens. Arrona-Lara is the sole breadwinner for his family. His wife Maria is asking for his immediate release.

Welcome to Democracy Now! Russell, can you start off by explaining exactly what took place last week?

RUSSELL JAUREGUI: Well, what happened on August 15th, Wednesday morning, about 10:00, was Mr. Lara was taking his wife to the hospital because she was going to give birth to a baby via C-section. They stopped at a gas station in San Bernardino on the corner of Mountain View and Highland. It was an ARCO station. He got out to get gas, and immediately he was—they were surrounded by two SUVs. ICE agents then approached his wife, asked for her ID, which she produced. And then the ICE agents approached him and asked for his ID, which he did not have, because in the haste of leaving his home to get his wife to the hospital, he just forgot it. And so his wife pleaded with the officers to allow him to go home and to get his ID, because, in fact, they live just right down the corner from the glass—excuse me, from gas station. He was not allowed to do so. He was immediately arrested. And as you said, she basically panicked and had to drive herself to the hospital. And that’s basically what happened on that day.

AMY GOODMAN: So, both she and he had ID, had a form of documents?

AMY GOODMAN: So, Maria went to—drove herself to the hospital, and she gave birth—

RUSSELL JAUREGUI: She gave birth, and, yeah, a few hours—I don’t know exactly when, but she did give birth to the baby, and the baby was born, you know, thank God, safely. And she was released from the hospital just this last Saturday.

AMY GOODMAN: So she was alone when she gave birth?

RUSSELL JAUREGUI: Yes. Well, yeah, she was without her husband, correct, and the baby’s father.

AMY GOODMAN: We see her inside the gas station, it seems hysterical, speaking on the phone, just through the closed-circuit video.

AMY GOODMAN: So, can you explain why ICE has said they picked him up?

RUSSELL JAUREGUI: Well, at first, he was just arrested for not having an ID. And it wasn’t until Thursday—almost three days later, where they made a statement about him—them detaining him because of him having an arrest warrant in Mexico for a homicide. Well, number one, he’s been here 12 years, and this has never been an issue with him before. Number two, he completely denies that, saying that “I’ve never had any kind of arrest warrant in Mexico.” And number three, we have reviewed the charging documents from him, from the immigration—from the ICE agents, and the—just basically, the charging documents allege that he came without status, that he is from Mexico, and therefore he is removable from the United States. Does not mention anything about any kind of homicide arrest in Mexico. And since he’s been detained, what he tells me is no one’s ever brought this to his attention.

AMY GOODMAN: So, what rights does he have right now? Where is he being held?

RUSSELL JAUREGUI: He’s being held at the Theo Lacy detention center. He does have a right to a bond hearing before an immigration judge in immigration court. He does have the right to counsel. We’re going to represent him pro bono. He does have the right to pursue a bond hearing to see, determine if he can be released. We’re hoping that he can, given his length of time here in the United States and the fact that he does have three U.S. citizen children. And then, if he is, hopefully, released on bond, then his case will continue with the immigration courts, where he’ll be pursuing his, hopefully, relief during a removal hearing before an immigration judge, where he’ll have to prove that, you know, his U.S. citizen kids will suffer exceptional and extreme and unusual hardships without him if he’s removed.

AMY GOODMAN: Has he—

RUSSELL JAUREGUI: And this process could take one or two years.

AMY GOODMAN: Has he gotten to see his infant son and his wife?

RUSSELL JAUREGUI: No, he has not. I know he’s been in touch with his wife, but he has not been able to see his son. So, that’s—

AMY GOODMAN: Could he—

RUSSELL JAUREGUI: Our main goal is to get him released, so he can be with his family and see his son. That’s our main goal right now.

AMY GOODMAN: Is it possible he would be deported before seeing his son?

AMY GOODMAN: Was this issue of a homicide charge brought up after the outcry grew over that day and the next day, when people saw the video?

RUSSELL JAUREGUI: That’s a very good question. I think, yeah, it was. It was. And so, the timing of this is kind of odd, because this happened, I believe, after the video went viral, after the public outcry. And so, that’s when this announcement was made, on Saturday, which is almost what? Three days after he was arrested.

AMY GOODMAN: “Zero tolerance.” Is this under the “zero tolerance” policy? And can you see this policy changing?

RUSSELL JAUREGUI: I think this is more—”zero tolerance” is what’s happening with the—on the border with the unaccompanied minors. This is more, I think, of the Trump administration’s policy of basically everyone now being at risk of being—anybody here without status as being at risk of being detained and arrested. But as you can see, this has human consequences. It affects, you know, U.S. citizen kids. There’s nothing in—I don’t think ICE has any protocol for dealing with people who are transporting their spouses, you know, who are about to give birth. And so, you know, as we can see with other situations, this reminds me of the case where the—I think it was a young girl who was passing through a border checkpoint in Texas, who had serious disabilities, and ICE followed her all the way to the hospital. And this is like the children at the border who have been detained, separated from their parents, with no plan for reunification. This is just—this is egregious acts, and they’re cruel. And so, there needs to be some kind of change in policy, and, if not, some kind of change in—some change in administration.

AMY GOODMAN: I want to thank you so much for being with us, Russell Jauregui, staff attorney at the San Bernardino Community [Service] Center. He is the lawyer for Joel Arrona-Lara, who was picked up by ICE agents as he was driving his wife to the hospital to give birth.

This is Democracy Now! When we come back, another immigration story, then we remember longtime peace activist David McReynolds. He ran for president twice. Stay with us.

Horror at TX Detention Center: ICE Guards Separate Fathers & Sons After They Had Just Been Reunited

NEXTHorror at TX Detention Center: ICE Guards Separate Fathers & Sons After They Had Just Been Reunited 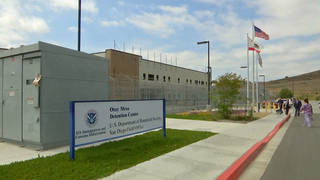