A Bangladeshi woman facing deportation has been granted a last-minute stay following public outcry against her removal. Salma Sikandar’s deportation was halted less than 24 hours before she was supposed to board a one-way flight to Bangladesh, leaving behind her husband and 17-year-old son, who is a U.S. citizen. Sikandar has lived in the United States for nearly 20 years. But in June she was told by Immigration and Customs Enforcement that she had to leave the country by August. That’s when her community stepped in, staging protests in New Haven and a hunger strike outside the ICE office in Hartford, demanding Sikandar be allowed to stay in the United States. We speak with Salma Sikandar and her son Samir Mahmud, who will start his freshman year at Quinnipiac University next week. It has been Sikandar’s lifelong dream to send her son to college.

AMY GOODMAN: We end today’s show in Connecticut, where a Bangladeshi woman facing deportation has been granted a last-minute stay, following public outcry against her removal. Salma Sikandar’s deportation was halted less than 24 hours before she was supposed to board a one-way flight to Bangladesh, leaving her husband and 17-year-old son, who’s a U.S. citizen. Sikandar has lived in the United States for nearly 20 years. But in June she was told by ICE, Immigration and Customs Enforcement, she had to leave the country by August. That’s when her community stepped in, staging protests in New Haven, a hunger strike outside ICE office in Hartford, Connecticut, demanding Salma be allowed to stay in the U.S.

This is Salma’s husband, Anwar Mahmud, speaking to NBC Connecticut shortly after the stay of deportation was announced.

ANWAR MAHMUD: At first she was leaving. Then we have no chance to fight back. Now she’s still here, so we can fight. So that’s all we need. We need to fight. And we’re going to win this fight.

AMY GOODMAN: For more, we go to Hartford, Connecticut, where we’re joined by Salma Sikandar herself and her son Samir. Later today, they’ll be heading to Quinnipiac University, where Samir will start his freshman year. It’s been his mother’s lifelong dream to send her son to college.

Welcome to Democracy Now! Salma, let’s begin with you. How did this happen, that your deportation was stopped?

SALMA SIKANDAR: Yeah, the community helped me. And a lot of community organizers around has helped me.

SAMIR MAHMUD: A lot of the—oops, sorry. A lot of the community helped her out, and there were multiple protests all over the—

SAMIR MAHMUD: —Hartford area and New Haven area, which helped my mother become known to ICE and know—let ICE know that there are supporters and that they’re wrongfully deporting her.

AMY GOODMAN: Samir, can you talk about the hunger strike led by your father?

SAMIR MAHMUD: So, the hunger strike was originally an idea I wasn’t that OK with, because I didn’t want people suffering for my mom, so then my mom neither. And so, what happened was my dad had a bunch of crazy ideas, because he was losing his mind, to be honest, because of the deportation. He was going to lose the love of his life, and he was going to lose my mother. So, he thought of having a hunger strike in front of Hartford, in front of ICE’s building, where if they look out the window, they see us, for the next 43 hours, until the deportation date/time. And so, the hunger strike was led in front of ICE. There were about nine other individuals who joined. Then, over hundreds of people joined us, from the South Windsor mayor to the Manchester mayor. Even the Hartford mayor himself and Governor Malloy and Senator Blumenthal showed support. And—

AMY GOODMAN: So, GEO Group facilitated. That’s the large prison company that there was a mass protest against all over the country weeks ago. But they facilitated your mom, Salma Sikandar, from—wearing an ankle bracelet, since what? An ankle monitor, since June. They took that monitor off yesterday. Explain what’s happened, Samir, in this week, how this changed, why ICE said they were deporting her after she lived here for 20 years, and then just the developments of this week.

SAMIR MAHMUD: So, what happened was, on Monday, we had our press conference of Rosa DeLauro, and she started bawling her eyes out, because she read our story, and she heard everything, that this mother, who is actually being wrongfully deported, is being wrongfully deported. She has no crime. She has done nothing. And so, Rosa DeLauro started crying. And she asked ICE, personally called them and asked them to grant my mother a stay or consider having a stay.

So, 20 hours later, we got a notice from the board of immigrations that my mother’s denial got—my mother’s stay order got denied. And so, we were about to lose hope. And so, for the next—and there was time. Our lawyers and everybody we knew advised us to maybe talk about sanctuary. And so, what happened was, as we were about to talk about sanctuary and we were about to finalize the moment, we got a call from Congresswoman DeLauro’s office saying that ICE is making—something is going on inside of ICE’s building, that ICE is considering my mom’s case now, and the chief of ICE, that is in that building behind us, is looking into our case. And so, I let everybody know, the hunger strike and the news medias. And they were all—they were all ecstatic. But we didn’t know how long that was going to be.

So, about 20 to an hour later, we got the call from our lawyer and said that ICE has granted the stay for officially a year, which can be renewed. And so, after that, my mom just had tears of joy, and she started crying. And my dad just started crying like a baby. I’ve never seen him cry like that. And so, I guess ICE looked at us, and I thank—and, again, I thank ICE for looking at my mother, looking at us and not deporting my mother, who deserves to be in this country with me.

AMY GOODMAN: Salma, it was your lifelong dream to take Samir to college, first generation to come to—to be here. It wasn’t clear you would be at his side, but now you will be taking him to Quinnipiac today. How does that feel?

SALMA SIKANDAR: Actually, this is my long life dream. My son is going to Quinnipiac University. It’s a very good university. I am feeling very good. And he starts Monday to college. So I am very happy.

AMY GOODMAN: And, Samir, it’s pretty stressful to start college, and also exciting. And you—further, you are stressed by the idea that you were losing your mother. Now she will be at your side, taking you to school today. How do you feel?

SAMIR MAHMUD: I feel—I feel relieved, because I got knocked into the political world without even knowing about it or trying, for the last month. I have met with various politicians, various supporters. And I want to thank everybody. And there was also a petition, I want to thank the 43,000 people that signed that petition to keep Salma home/keep my mom home. So, after all, I feel like the hard work paid off. And I know this is not the end or the—and this is just the beginning of what’s going to happen in the future. But I’m just relieved that on the first day of school we can keep the tradition going of my mom dropping me off in front of everybody and embarrassing me.

AMY GOODMAN: And, Samir, have a great year at Quinnipiac.

I want to wish Vesta Goodarz a happy birthday. 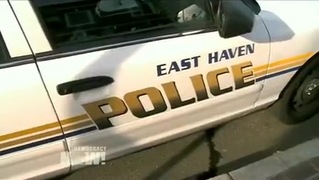