Joaquin Oliver would have turned 18 years old on Aug. 4 had he not been killed on Valentine’s Day, along with 16 other students and staff, at Marjory Stoneman Douglas High School in Parkland, Fla. Like many student survivors of the Parkland massacre, Joaquin’s parents, Manuel and Patricia Oliver, have become gun control activists. Had Joaquin lived, Aug. 4 would have been a day of celebration. Instead, Manuel and Patricia joined other activists outside the headquarters of the National Rifle Association in Fairfax, Va. Manuel wore a shirt that read, “Books not Magazines.” The artful play on words included a stylized AR-15 semi-automatic rifle embedded in the word “Magazines,” highlighting the large ammunition capacity of the weapon—the gun of choice of mass shooters in the U.S.

The phrase took on another meaning last week when it was first reported that Education Secretary Betsy DeVos was considering allowing federal education funds to be used to buy guns to arm teachers in the classroom.

“This proposal is, to put it in simple terms, outrageous,” Adam Skaggs, chief counsel at the Giffords Law Center to Prevent Gun Violence, told us on the “Democracy Now!” news hour. The organization was founded by Gabby Giffords, who, when a member of Congress, survived a mass shooting in her home district in Tucson, Ariz. “At a time when we are seeing schools that lack the resources to buy books, to buy school supplies for our classrooms, the idea of diverting federal funds to be used to arm teachers is not only a terrible idea,” he continued, “we believe it violates federal law.”

At least 170 Democratic members of Congress agree that DeVos’ diversion of funds from the Student Support and Academic Enrichment Grants program would violate the letter and the intent of the law. Rep. Bobby Scott (D-Va.) spearheaded a joint letter, instructing DeVos that “Congress never contemplated, and thus never intended” that these Department of Education funds would be used “for the procurement of firearms.” Politico reported that “a senior Trump administration official” told their reporter that “Oklahoma and Texas had asked DeVos about whether they could use a popular pot of federal school funding for firearms and firearms training, so agency officials are researching the issue.” A spokesperson from the Oklahoma State Department of Education told both Politico and the Tulsa World newspaper that no such request had been made.

Democratic Sen. Chris Murphy of Connecticut has introduced a bill that would prevent these funds, intended to enrich this nation’s poorest schools, from being used to buy weapons. Murphy said in response to the news, “The secretary is about to issue guidance saying that that money can be used to load schools up with weapons.” Murphy had been a congressman representing Newtown, Conn., when the Sandy Hook Elementary School massacre took place. Murphy, questioning DeVos during her January 2017 confirmation hearing, asked, “You can’t say definitively today that guns shouldn’t be in schools?” DeVos famously responded, citing a school in Wyoming, “I would imagine that there’s probably a gun in the school to protect from potential grizzlies.”

Randi Weingarten, president of the American Federation of Teachers, calls the DeVos plan “insane.” She said on “Democracy Now!”: “It’s reprehensible. It’s morally outrageous. … The funds that she wants to use, first off, last year she tried to get rid of these funds. These go for summer school programs, after-school programs, guidance counselors, restorative justice, helping kids learn how to defuse crisis, mental health supports … she wants to divert these funds for something that will make schools less safe. It’s repugnant.”

Just this week, teachers are striking in many districts in Washington state, following teachers strikes across the country, from West Virginia to Kentucky to Oklahoma, where teachers are paid some of the nation’s lowest salaries. Teachers are demanding not only higher pay, but adequate funding for their schools as well.

AFT President Weingarten said: “Think about it: A kindergarten teacher wearing a holster with a handgun, what does that say to her children? The only entity it seems to help is the NRA and the gun manufacturers.”

Currently, DeVos is reportedly only at the research stage of using public education funds to buy guns. Opposition from Congress, educators and grass-roots organizations will be crucial to block it. As Manuel and Patricia Oliver wrote recently, before protesting outside the NRA’s headquarters on what would have been their son Joaquin’s 18th birthday: “We don’t want thoughts. We don’t want prayers. We want change.” 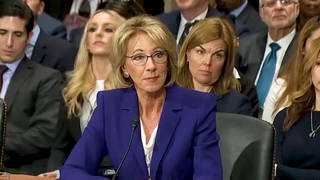 Books, Not Magazines: Outcry Grows over DeVos Plan to Divert Federal Funds For Guns in Schools