As Republicans charge forward with Brett Kavanaugh’s Supreme Court nominee hearing despite Dr. Christine Blasey Ford’s claim that he raped her as a teenager, a new Nation investigation reveals a secret network of right-wing activists has spent millions of dollars attacking questions about Kavanaugh’s stance on abortion, LGBTQ rights and executive privilege as “anti-religious bigotry.” We speak with Sarah Posner about her explosive new report for The Nation, “The 'Anti-Catholic' Playbook.” She is a reporting fellow at the Investigative Fund at The Nation Institute.

AMY GOODMAN: Sarah, I want to move into your investigation. And if you can talk about how Kavanaugh has been portrayed by his supporters and how the revelations have compromised that image? And this takes us into this investigation you did called “The 'Anti-Catholic' Playbook.”

SARAH POSNER: Right. So, for several cycles of Supreme Court nominations, conservatives have sought to portray Democrats’ questions about Supreme Court nominees’ views on issues like abortion and LGBT rights as anti-religious or anti-Catholic bigotry. Kavanaugh is well familiar with this strategy, because when he served in the George W. Bush White House as associate White House counsel, he was deeply involved in shepherding Bush’s federal court nominees through the nomination process.

And there were a couple of them who had publicly expressed extreme hard-line views on the abortion and LGBT rights issues. And under questioning by Democrats about their views, Republicans pushed back and tried to portray those questions as being anti-Catholic bigotry. They ran an ad that basically portrayed a courtroom with a sign over it that said “Catholics need not apply,” trying to hearken back to a time when there was real anti-Catholic bigotry in American society.

And they even deployed this tactic against Democrats who were Catholic. So, in the 2004 election, after some of these nominees had been through this process and Republicans had tried to portray Democratic questioning as anti-Catholic bigotry, this network of conservative political PACs and political advocacy organizations attacked Catholic Democrats who were running for office, specifically Tom Daschle, who was then the Senate minority leader, and John Kerry, who was running for president. And they were attacked as being—basically, being anti-Catholic.

They both lost. And their candidacies were to prove quite pivotal to the Republican strategy for stacking the courts, because had Daschle won, that would have increased Democrats’ chance at the time of retaking the Senate, and he would have had control over the nomination process. And obviously if Kerry had won, he would have been the president nominating judicial nominees instead of George W. Bush. Bush won, the Republicans retained control of the Senate, and then Bush successfully appointed both John Roberts and Samuel Alito to the Supreme Court during that second term.

So, Kavanaugh was very familiar with that strategy. That strategy is carried out by a network of advocacy groups and public relations professionals, who have said that they carefully craft the image of a nominee ahead of time to create a positive image of the nominee. So Kavanaugh is very familiar with how all of this works. And so it’s no accident that when he was accepting Trump’s nomination and when he gave his opening statement to the Senate Judiciary Committee during his confirmation hearings, that he emphasized his Catholic faith, that he emphasized that he had gone to a Catholic school. He emphasized that he coaches his daughter’s basketball team at a Catholic school. And he emphasized that he helps the homeless and serves meals at Catholic Charities.

This is all part of creating an image of Judge Kavanaugh that he’s a devout Catholic who’s very dedicated to serving the community. Now that he’s put that image in play, I think it’s fair to investigate this accounting by numerous other people that the environment at this Catholic school, whose values he extols, was one of drunkenness, debauchery and sexual abuse.

AMY GOODMAN: And, Sarah Posner, the ads that have been taken out that we’re seeing everywhere on the networks, talk about the committee that has put this all together.

But they’ve also been involved in this idea that Democrats’ questions about nominees’ views on these hot-button culture war issues are evidence of anti-Catholic bigotry. For example, just last year, when Trump nominated Amy Coney Barrett to the 7th Circuit, when Senator Feinstein questioned her about whether she would be able to separate her devout Catholic faith from the law when making decisions on cases like Roe v. Wade, Feinstein was immediately attacked, and Judicial Crisis Network ran ads depicting this as anti-Catholic bigotry.

So they’ve been in the mix for quite some time in portraying—in helping to portray these kinds of questions as somehow being anti-Catholic. And they’re also very involved in creating ads about Judge Kavanaugh that portray him as a pillar of the community.

AMY GOODMAN: We want to thank you very much for being with us. Of course, we’re going to follow this case as this unfolds. Tomorrow morning, 10 a.m. deadline for Dr. Blasey Ford, set by Chuck Grassley, the head of the Senate Judiciary Committee, that she must make a decision whether she will testify publicly, privately or not at all.

Sarah Posner, we want to thank you for being with us, reporting fellow at the Investigative Fund at The Nation Institute. We’re going to link to your piece, “The 'Anti-Catholic' Playbook,” as well as your piece in The Washington Post, “To Trump, Kavanaugh’s testimony about religious liberty made him worth the pick.” Your book, God’s Profits: Faith, Fraud, and the Republican Crusade for Values Voters. This is Democracy Now! We’ll be back in a minute. 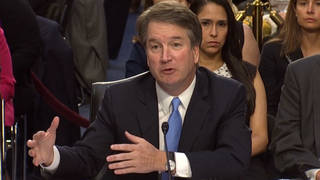 Will Kavanaugh Overturn Roe v. Wade? SCOTUS Nominee’s Confirmation Is About “Life and Death for Women”